"It is an amazingly complex effort to maintain the fuel lines," said Marine Gen. James Mattis. 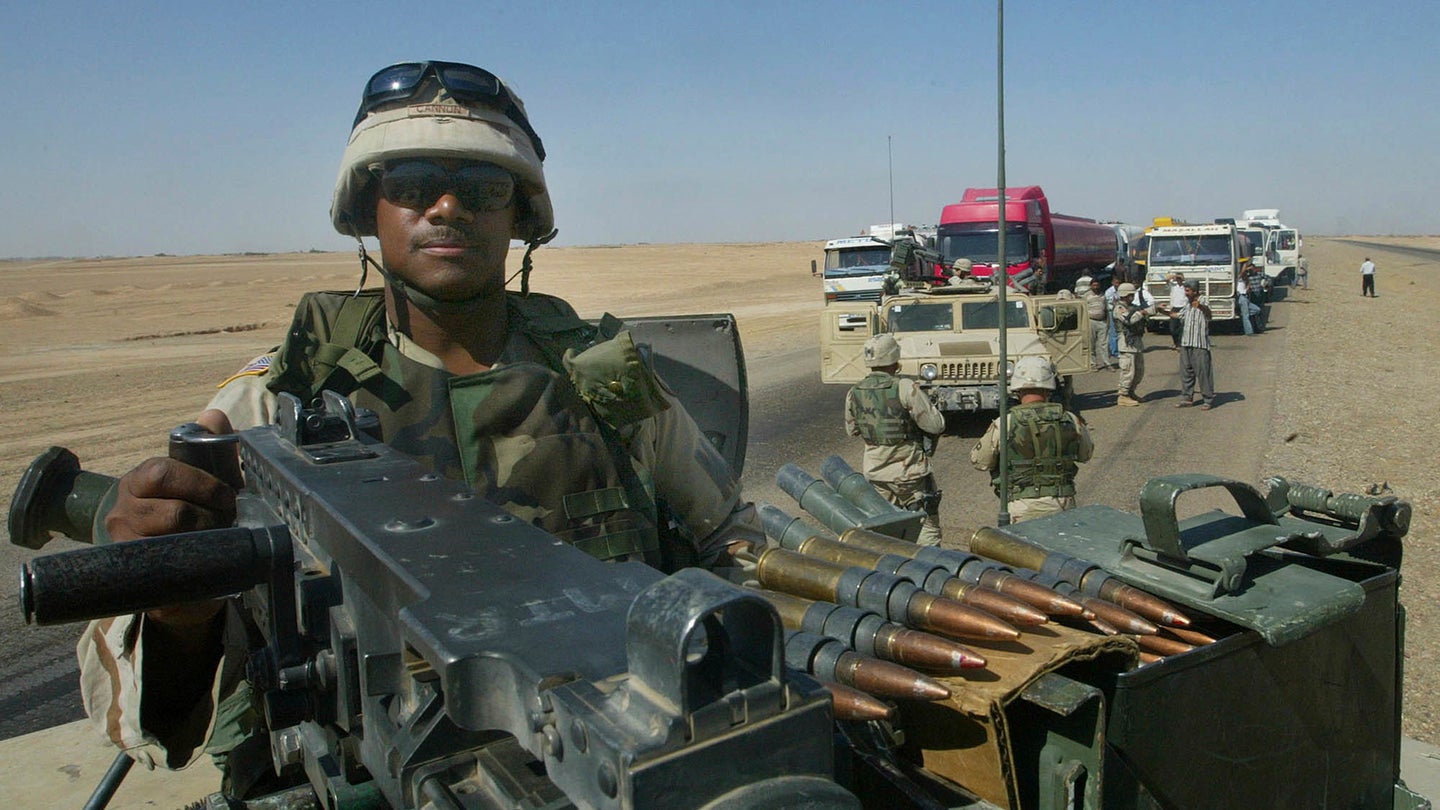 FILE - In this 2003 file photo, American Cpl. Gene Canon of Tampa Bay, Florida, mans a 50 caliber machine gun as security for a fuel tanker convoy on the road from Tikrit to Samara in Iraq. (AP Photo/Rob Griffith, File).
SHARE

On April 9, 2004, a convoy that included 17 fuel trucks left the U.S. military base at Balad, Iraq, headed for Baghdad. Insurgents ambushed the Americans in a well-prepared kill zone and two soldiers and five defense contractors were killed. Another four Americans were missing, including Army Spc. Keith Maupin, whose remains were discovered four years later.

The grim battle was not an isolated incident. NATO estimated that 3,000 U.S. troops were killed or wounded from 2003 to 2007 by attacks on water and fuel convoys in Iraq and Afghanistan, according to the RAND Corporation, a nonprofit research organization.

By May 2007, about 80% of all the cargo that the U.S. military transported in war zones was fuel, Bryan Bender, then a reporter for the Boston Globe, revealed at the time.

These data points show how fossil fuels are the U.S. military’s Achilles’ Heel, and until the Defense Department develops new sources of renewable energy, American troops will continue to fight and die while transporting and protecting fuel supplies.

An argument could be made that finding alternatives to fossil fuels would make the U.S. military a more lethal force because American troops could spend more time attacking the enemy rather than defending fuel for vehicles, generators, and aircraft. Based on lessons learned from the invasion of Iraq, retired Marine Gen. James Mattis told Navy researchers at Marine Corps Combat Development Command in 2005 to find ways to “unleash us from the tether of fuel.”

“It is an amazingly complex effort to maintain the fuel lines,” Mattis told the House Armed Services Committee in March 2011, when he was head of U.S. Central Command. “And it also gives the enemy an ability to choose the time and place of attacking us.”

Every time that U.S. troops transport fuel to forward forces, they become vulnerable, said retired Army Lt. Col. Dwyane Butler, an expert on military logistics with the RAND Corporation. Additionally, any place where the military stores fuel must also be protected.

Moreover, any adversary will likely send its most capable forces to disrupt the U.S. military’s logistics, while the fuel handlers and other American service members assigned to protect fuel storage areas typically do not serve in ground combat specialties, Butler told Task & Purpose.

“If we can’t figure out a way to get more efficient at the point of use, or with the consumption, [of fuel] then we are putting people in harm’s way,” Butler said.

In a war against Russia or China, the U.S. military’s fuel storage sites, tankers, and aerial refuelers would be likely targets for enemy ballistic and cruise missiles. And while advanced aircraft such as the F-35 are stealthy, the aerial refueling tankers they depend on are not, and the loss of those tankers would severely limit the range of all U.S. aircraft.

U.S. military officials in both Europe and the Pacific declined to comment on how they store and protect their fuel supplies. But Navy Adm. John Aquilino, the commander of U.S. Indo-Pacific Command, told the House Armed Services Committee in March that military officials are working on “a more distributed plan — both forward- and land-based — combined with a sea-based component to allow for a more distributed, survivable, resilient network of fuels, as well as meeting all of the security and the strategic fuel reserve requirements.”

However, China not only has the ability to destroy the U.S. military’s above-ground fuel storage and distribution points, but it also controls many of the facilities in the Western Pacific that turn petroleum into refined products, such as aviation fuel, said Chris Dougherty, an Army veteran who is now a defense strategy expert with the Center for a New American Security think tank in Washington, D.C.

“That could potentially pose significant challenges to the United States in the event of a conflict with China,” Dougherty told Task & Purpose. “While we might have – in theory – access to a lot of fuels, access to refined fuels in theater – which is how we generally do it today – would be limited.”

None of the challenges posed by the U.S. military’s tether to fuel are new to warfare. Dependence on fuel has been a vulnerability for most militaries throughout history.

“Fuel is the jugular vein that every smart attacker in almost every war has always gone after, from the Allies in World War II to the Ukrainians taking our Russian fuel trucks today,” said Peter Singer, a strategist and senior fellow at the New America think tank in Washington, D.C.

Indeed, lack of fuel contributed to the failure of the German offensive during the Battle of the Bulge, Singer said. The Germans only had enough fuel to start the battle in December 1944. They hoped to capture Allied fuel depots, but they were unable to do so, and fuel shortages slowed their advance.

“Toward the end of the battle, several of their tank columns literally ran out of fuel and were just abandoned,” Singer said. “Fuel was a major reason why Hitler’s last gamble failed.”

Despite all the drawbacks of fossil fuels, the U.S. military has few alternatives for the foreseeable future. While the Army plans to introduce hybrid-electric combat vehicles by 2035, followed by fully electric tactical vehicles by 2050, no technology is expected to be available anytime soon that would allow ships and aircraft to be powered by electricity, defense officials said.

Right now, the U.S. military is trying to make its vehicles and aircraft as energy efficient as possible to reduce the demand for fuel, said Richard Kidd, deputy assistant secretary of defense for environment and energy resilience.

“We have the technology now to add hybrid-electric engines to all of our wheeled vehicles,” Kidd told Task & Purpose. “Depending on the vehicle, [that’s] 18 to 24% fuel savings.”

The Pentagon also plans to put more fuel-efficient engines on B-52 bombers and F-35 Joint Strike Fighters, said Kidd, who noted that aircraft account for the lion’s share of the U.S. military’s fuel consumption.

While private industry is developing new forms of sustainable aviation fuel, it is “not cost-competitive” and would still need to be transported to troops, he said. “Right now, we have a whole range of energy efficiency technologies that can reduce our demand,” Kidd said. “Of course, the safest gallon of fuel to move on the battlefield is the gallon you don’t need.”

The Defense Department has also announced that Idaho National Labs will build a portable nuclear microreactor that is capable of generating electricity for three years.

“A safe, small, transportable nuclear reactor would address this growing demand with a resilient, carbon-free energy source that would not add to the DoD’s fuel needs, while supporting mission-critical operations in remote and austere environments,” an April 13 Pentagon news release says.

Yet even with these technological advances, the U.S. military has not yet found a way to unshackle itself from fossil fuels. And that will mean only one thing: More trips for American service members outside the wire and into harm’s way.