"I think recreating the Trinity test [the first nuclear weapon detonation, in New Mexico] without the use of computer graphics, was a huge challenge to take on." 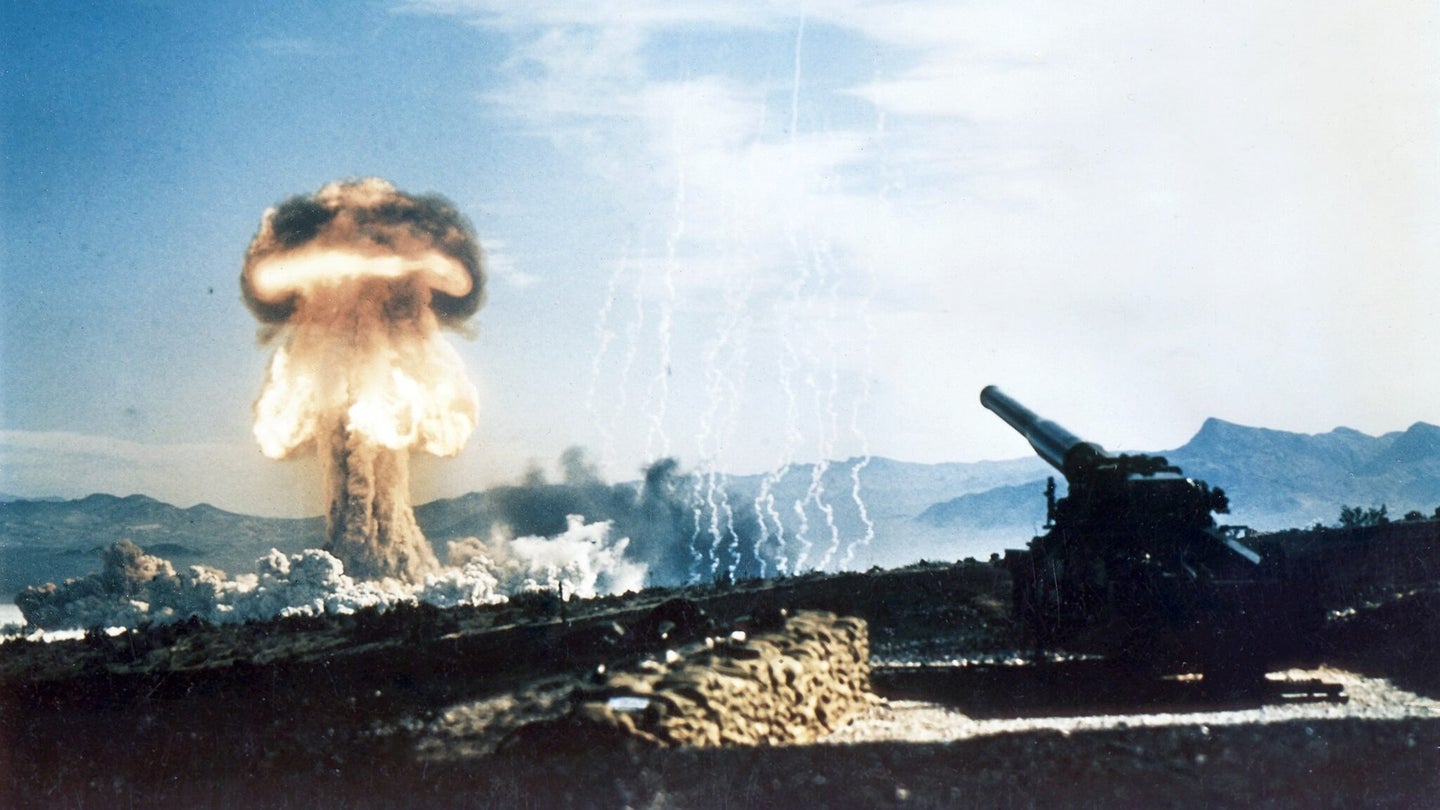 Part of Operation Upshot-Knothole, was a 15-kiloton test fired from a 280-mm cannon on May 25, 1953 at the Nevada Proving Grounds. (Wikimedia Commons).
SHARE

Christopher Nolan is not in possession of a nuclear bomb. However, the filmmaker caught peoples’ attention this past week when he revealed that his upcoming film Oppenheimer, a biopic of the man known as “the father of the atomic bomb,” features a recreation of the U.S. Army’s Trinity test at Los Alamos, New Mexico on July 16, 1945 — a recreation that doesn’t use CGI.

The film (adapted from Kai Bird and Martin J. Sherwin’s biography American Prometheus) follows Robert Oppenheimer (Cillian Murphy) leading up to the Trinity explosion and the aftermath of World War II. The trailer premiered online Sunday — the same weekend the Biden administration said the U.S. wrongly revoked his security clearance in 1954, following the scientist’s criticism of nuclear proliferation. A separate, different preview aired ahead of screenings of Avatar: The Way of Water this weekend, but has not yet gone online (with all recordings being quickly taken down). Both hint at and give glimpses of what has become the centerpiece of the film, but they don’t show the explosion outright.

“I think recreating the Trinity test [the first nuclear weapon detonation, in New Mexico] without the use of computer graphics, was a huge challenge to take on,” Nolan told Total Film ahead of the trailer’s release. “Andrew Jackson — my visual effects supervisor, I got him on board early on — was looking at how we could do a lot of the visual elements of the film practically, from representing quantum dynamics and quantum physics to the Trinity test itself, to recreating, with my team, Los Alamos up on a mesa in New Mexico in extraordinary weather, a lot of which was needed for the film, in terms of the very harsh conditions out there – there were huge practical challenges.”

What does that mean? Well, it is highly unlikely that Nolan and his visual effects team at DNEG got ahold of uranium or anything like that, despite the many, many jokes about his dedication to recreating the Trinity test. He also probably didn’t gain access to a massively powerful non-nuclear military bomb, like the GBU-43/B Massive Ordnance Air Blast (also known as the “Mother of All Bombs”) that was used for the first time in April 2017 in Afghanistan.

For comparison, one of the biggest depictions in a nuclear explosion — the Trinity test specifically — was in the television show Twin Peaks: The Return in 2017. That sequence, showing the detonation before zooming into the mushroom cloud, was an 11-minute computer creation from effects company BUF.

Nolan’s movies have a heavy emphasis on practical effects. From flipping a semi-truck for real in The Dark Knight to spinning a hallway for real in Inception for the right effect, he favors tactile effects over anything computer-generated. For his previous film Tenet, he transformed an abandoned mining town near Joshua Tree into the ruins of a Soviet closed city for a massive army versus army showdown. DNEG is the same effects company behind those productions, so it’s likely Oppenheimer will have similarly impressive undertakings.

The largest practical explosion in cinema was created for the 2015 James Bond film Spectre. That utilized 72 pounds of explosives and thousands of gallons of fuel, setting a Guinness World Record (Michael Bay claims Pearl Harbor has a bigger explosion). That was equivalent to 68.47 tons of TNT. For comparison, the Mother of All Bombs, detonated in Afghanistan, is equal to 11 tons. The real Trinity test was the equivalent of 25 kilotons of TNT. The challenge in these cases, as with Spectre, is that there is usually only one chance to get the effect right.

It’s unlikely that Nolan and DNEG have crafted something on the scale of the actual Trinity explosion. Until they reveal their exact method, it remains a mystery. However given their track record, it is likely a part of New Mexico saw a very large explosion.