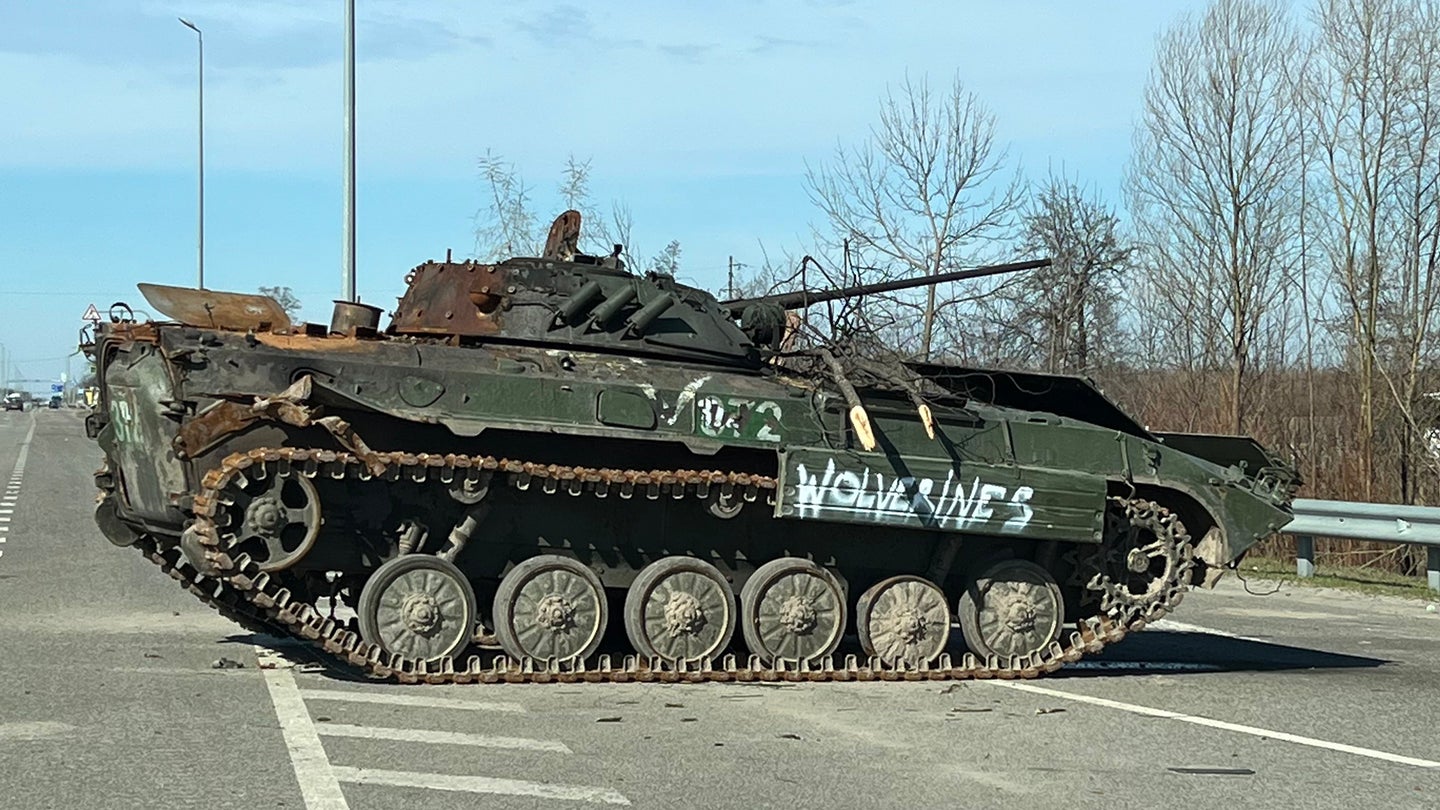 A photo of a Russian BMP-2 with the words "Wolverines" spray painted on the side in an apparent reference to the 1984 Cold War era action movie "Red Dawn." (Oleg Tolmachev/Twitter).
SHARE

Life imitates art. For recent proof of this centuries-old maxim, look no further than this photo of an abandoned Russian infantry fighting vehicle in Ukraine with the word  “Wolverines” scrawled on the side in white spray paint in an apparent homage to the 1984 Cold War-era action flick “Red Dawn.”

The photo was shared to Twitter on Thursday in response to a tweet by NPR’s White House correspondent, Scott Detrow, who wrote that “We were driving too fast to get a clear picture – but we just drove past a destroyed Russian tank with WOLVERINES spraypainted across it.” Fortunately, Oleg Tolmachev, the head of production for Ukrainian oil and gas company Naftogaz, had seen the exact same thing and snapped a photo of it.

The vehicle appears to be a Russian BMP-2, an infantry fighting vehicle that fulfills a similar role to the U.S. Army’s Bradley Fighting Vehicles. The BMP-2’s awkward forward tilt suggests that it suffered damage prior to its eventual abandonment and newfound transformation into a monument to 1980s pop culture in an active warzone.

So yes, remarkably, somewhere in Ukraine, a piece of Russian armor is now a meme for a movie about a bunch of high school students in Colorado who fend off a Russian invasion thanks to some good ole’ fashioned American grit, ingenuity, a fuckton of 7.62mm ammo, rocket-propelled grenades, and a surprisingly solid grasp of insurgent warfare.

Directed by John Milius, “Red Dawn” stars Patrick Swayze, Thomas Howell, Charlie Sheen, Lea Thompson, and Jennifer Grey, among others, as Colorado teens whose small-town lives are upended by a Soviet invasion of the United States. After establishing military control of the town of Calumet, the Soviet invaders find themselves occupiers. In response, a resistance forms.  Made up mostly of teenagers and young adults, they don the mantle of “Wolverines” after the town’s high school mascot and set about sowing chaos and confusion among the Soviet force’s ranks.

As anyone with access to a history book can tell you — and as Russian forces might discover if they attempt to establish a permanent presence in Ukraine — occupations breed insurgencies, and insurgencies are nearly impossible to defeat with conventional military means. Every citizen is a potential combatant, and fighters blend seamlessly into the populace. They have an inherent home-field advantage, not just through a deep personal knowledge of the terrain, but of the people and culture. As such, they also tend to enjoy considerable local support.

For these reasons, the occupation of Calumet ends in disaster for the occupiers in “Red Dawn” — as it does so often in real life. Indeed, the photo of the BMP-2 in Ukraine mirrors images from the film, where destroyed Soviet vehicles are graffitied with “Wolverines,” which becomes a rallying cry for the resistance in Calumet.

But unlike “Red Dawn,” which is a work of pure fiction and the result of some serious Cold War angst, what’s happening in Ukraine following Russia’s invasion on Feb. 24, is all too real. Unlike the theatrical invasion of a small town in America’s heartland, a sovereign nation has been attacked by its neighbor and is fighting back, not just with memes and an impressive information operations campaign, but with an established military force, bolstered by international support in the form of aid and arms, and the odd foreign volunteer.

It’s unclear at this point if the reference to “Red Dawn” was the contribution of an American overseas, or if the film has an established international audience. But one thing is certain: invading Russian forces should see it as a warning as to what’s in store for them should they prolong their stay in Ukraine.