The DoD Has A $700 Million Ammunition Problem In Afghanistan

The Department of Defense has faced some serious obstacles with regards to keeping track of all of the U.S. military … Continued 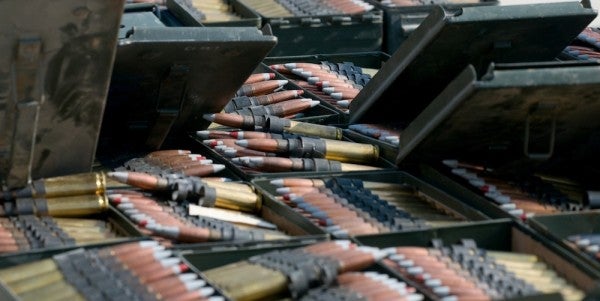 The Department of Defense has faced some serious obstacles with regards to keeping track of all of the U.S. military equipment transferred to the Afghan government (let alone the security forces ostensibly wielding them), since efforts to reconstitute the country’s standing national army began in earnest in 2002. But according to a new report, the command tasked training the Afghan national security forces can’t even keep count of its bullets.

The Combined Security Transition Command–Afghanistan (CSTC-A) — the Pentagon command tasked with providing oversight of the equipment, funding, and organizational structure behind the training and equipping of the Afghanistan National Defense and Security Forces (ANDSF) — “did not provide effective oversight” of the $702 million in ammunition given to local security forces by the DoD in 2015 and 2016, according to a DoD inspector general report published on Sept. 22. Not only does this signal that the DoD has no idea how much of the $702 million in ammo purchased in 2015 and 2016, but an ambiguity regarding ammo requirements that could further imperil both U.S. reconstruction and combat operations in the country thanks to congressional budget wrangling.

So how much of that $702 million in ammo did the CSTC-A manager to misplace in Afghanistan, in volume and value? We’ll never actually know for one simple reason: The Afghan government agencies tasked with daily oversight lack “reliable access to electricity or the internet” required to submit reports to CSTC-A’s digital-only Core Inventory Management Software (CoreIMS), factors the DoD IG report recognizes as “beyond the control” of the central government. As a result, the DoD IG report doesn’t offer any solid estimates for losses outside of the broad $702 million figure in ammo transfer funding. In fact, the only specific instance of an observed discrepancy between an ANDSF’s reported inventory and ammo dump actually cited in the DoD IG report was a 2016 Afghan Ministry of Defense inspector general inspection that turned up 3,904 M-249 tracer rounds “not listed in previous inventories.”

Translation: We have a big, bad problem — and we’re not totally sure how big or bad it is.

If this sounds familiar, it should: As far back as 2008, a DoD IG report on arms, ammunition, and explosive accountability and control among the ANDSF found that the CSTC-A “had not issued implementing instructions or procedures governing the accountability, control, and physical security” of ammo stockpiles. Despite developing a “formal mentoring strategy” for Afghan defense and interior officials with regard to formal reporting and monitoring mechanisms, the CTSC-A was virtually blind when it came to ammo and small arms supply chains. The United States hasn’t been able to track the flow of its own ammo into Afghanistan for nearly a decade — and according to the latest DoD IG report, the Pentagon hasn’t made any significant changes to address the problem.

What we do know, based on the DoD IG report, is how this problem came to be: The lack of compliance among Afghan officials resembles a vaguely comical act of intimidation. In some cases, U.S. military personnel literally “could not perform physical inspections beyond the corps or zone level to validate ministry‑provided ammunition reports due to understaffing and security limitations.” The latest Special Inspector General for Afghanistan Reconstruction (SIGAR) report from September 2017 confirmed the prevalence of aggressive obstruction, noting that a SIGAR audit conducted in July 2014 “referenced poor record keeping and attempts by Afghan officials to obstruct entrance into warehouses as indicators that corruption was suspect in these cases.”

Related: CNN Crashes And Burns With ‘Exclusive’ Report On Russia Arming The Taliban »

As a result, CSTC-A “did not develop an effective strategy to oversee the ministries’ compliance” regarding ammo commitment letters, according to the report. At the beginning of CSTC-A’s operations, the command required the Afghan Ministries of Defense and the Interior to abide by annual “commitment letters” to ensure compliance with regards to ammo transfers. But when ministries failed to meet those requirements 65% of the time (36 of 55 assessments), per the DoD IG report, CSTC-A only doled out a single penalty for $250,00 against the Ministry of the Interior “for failing to document and report ammunition consumption” — a penalty that was never paid due to its application to “unobligated funds,” and, as a result, “had no impact” on the ministry’s behavior.

Given the DoD’s generally garbage track record of keeping military equipment out of the hands of those terrorists they were meant to kill, it’s possible that all of this missing ammo ended up in the bandoliers of Taliban insurgents who have undermined reconstruction efforts. This isn’t a new trend, of course: A dozen U.S.-made 5.56 armor-piercing M16 rounds go for between $40 and $50 on the country’s black market, per a 2015 Newsweek report, and Afghan officers estimated in 2016 that that eight out of 10 Afghan soldiers were even selling off copper shell casings to supplement their meager incomes (the average ANA soldier takes home a meager $185 a month, just above the $165 for an ANP patrolman; inconsistently paid, both salaries are well below the $300 monthly wage offered by the Taliban). In the latest SIGAR report, Special Inspector General John Sopko suggested that ammunition oversight is so lax among Afghan security forces that the Taliban “have instructed their field commanders to simply purchase U.S. supplied weapons, fuel, and ammunition from Afghan soldiers because to do so is both easier and less expensive for the insurgents.”

This level of corruption has also impacted reported troop levels. The 2017 SIGAR report found that nearly 200,000 of the 350,000 ANDSF soldiers on payroll are “ghost soldiers,” fictional military personnel trained and equipped on the DoD’s tab whose salaries and valuable assets are sold off by corrupt officials. These fictional security forces have been a thorn in the DoD’s side stretching back to the early days of the Afghan reconstruction effort in 2002, but the CTSC-A has made little headway in addressing the problem at the ministry level in recent years. Even with the implementation of biometric ID systems to track soldiers daily activities, the specter of Afghan corruption suggests that those security measures are easily bypassable.

The DoD’s ammo problem isn’t just a corruption issue, but a major obstacle for the combat readiness and overall effectiveness of the ANDSF that will have to handle security matters without U.S. military support, uh, eventually. The inconsistencies in ammo inventories ended up exacerbating the equipment mismatch already experienced by ANDSF troops saddled with “impractical” M16 assault rifles and second-hand Humvees that required more maintenance than they were worth, according to the SIGAR report. As a result, security forces like the Afghan local police continue to find themselves “outgunned by insurgents heavier weapons that were more effective at longer ranges,” resulting in the “inability of police forces to counter current and potential threats degrades their operational effectiveness and morale, increases their desertion rates, and reinforces a defensive mindset to avoid major casualties rather than engaging in proactive patrolling of their communities.”

The United States bears serious responsibility for current ammo crisis: As the Wall Street Journal observed, the DoD was “ill-prepared” for the challenges of nation-building that would come after the initial invasion of Afghanistan in October 2001. And this is a problem that the United States cannot fix, per the in the latest SIGAR report —instead, successful reconstruction will depend on “the Afghans’ ability to assume responsibility for the maintenance of weapons and equipment through contracting or training will be critical to meet force readiness requirements and the long-term sustainability of the ANDSF.” But the twin SIGAR and DoD IG reports indicate, Afghan security forces are nowhere near disciplined and organized enough to handle oversight of the arms and ammo flowing into the country — and, sadly, neither is the DoD.