Bird warfare: Why the Navy’s first aircraft carrier had a dedicated ‘pigeoneer’ 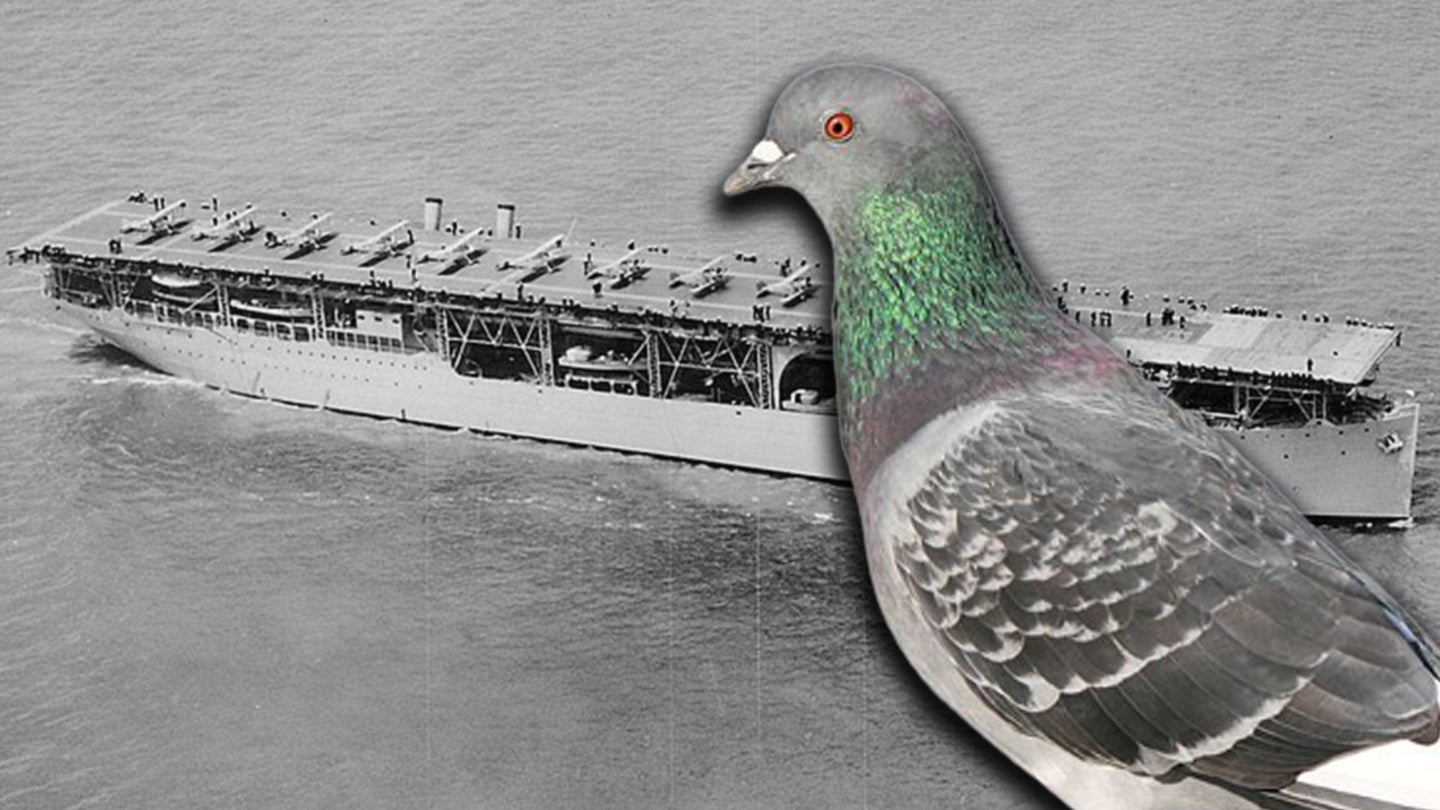 Sailors had more experience launching pigeons from ships than launching aircraft when the birds were brought aboard the USS Langley in 1922 (Photos via US Navy, Wikipedia / Alpsdake).
SHARE

Military working dogs get plenty of well-deserved credit for their vital role in sniffing out bombs and patrolling the bases of the U.S. armed forces. But they are far from the only animal to have saved the lives of service members over the years. In fact, when America’s first aircraft carrier, the USS Langley, was commissioned exactly 100 years ago on Sunday, some of its most important passengers were not pilots, navigators, or other sailors, but pigeons.

“On the stern, an elaborate pigeon house was built with food storage, nesting, training, and trapping areas” which was later to be re­built into the executive officer’s quarters, wrote Rear Adm. Jackson Tate, who served on the Langley early in his career, in 1978 for the naval magazine Proceedings.

“The radios of those days were very rudimentary, and most cross-country flights carried crates of homing pigeons in case of emergency,” he said.

Though the idea of a pigeon coop on a Navy ship may sound odd today, the birds had a proven battle history long before they swooped aboard the Langley. Ancient Egyptians sent messages via pigeons as far back as 3000 BCE, and in 1896 the Navy established the U.S. Naval Pigeon Messenger Service to ferry messages from ship to shore. The Navy built pigeon lofts up and down the East Coast, which came in handy when communicating with warships heading south to fight Spain in the Caribbean during the Spanish-American war in 1898, according to the Naval History and Heritage Command.

Even after the Navy outfitted its new ships with wireless telegraph machines in 1902, pigeons still proved their worth in the budding world of naval aviation. In World War I, Navy pilots carried pigeons with them aboard seaplanes while patrolling for submarines along the French coast.

“The aviators used pigeons to dispatch messages in the event of a crash or other emergency as wireless radio sets were large and cumbersome to carry aboard aircraft,” wrote the Naval History and Heritage Command in an article about the birds. “Upon release, the pigeon would carry the message to its home loft at one of the U.S. Navy air stations in France.”

If the idea of a small bird saving people’s lives isn’t heartwarming enough, keep in mind that once the pigeon arrived at a loft, it would go through a little slot that rang a bell alerting the pigeon master to retrieve the message. The birds were so useful that the Navy created a “pigeon trainer” enlisted rate. Officially their job was called Quartermaster (Pigeon), but the QM(P) sailors were also known as pigeoneers, Naval History and Heritage Command wrote. Though it sounds like a joke, pigeon training was a serious skill: QM(P) candidates trained at a special school for six to 12 months before they could work at a naval air station’s pigeon loft. There was a lot to learn, according to a 1918 Navy manual for pigeoneers.

“It included such things as when to bathe them (every other day and never on extremely cold days); how to build rapport with a bird; how to properly hold a bird; how often to clean their perches and nest boxes; and what they should be fed (50 percent Canada peas, 25 percent Argentine corn, 15 percent Kaffir corn or milo maize, and 10 percent whole rice),” wrote Naval History and Heritage Command.

The pigeons were so valuable to sailors that armed guards conducted nightly patrols of the grounds of Naval Air Station Anacostia, the largest pigeon school in the country with some 300 birds.

“They were well cared for, with bright and airy lofts that had running water, electricity, and a hospital ready to provide medical care if they fell ill,” according to the command.

All of this goes to show that the use of pigeons in naval warfare was likely better understood than the use of aircraft when USS Langley was commissioned. As Rear Adm. Jackson Tate recalled, much of the construction of the Langley was learned on the fly.

“No one was sure what the aviators wanted, except that there was to be a deck that planes could land on,” Tate wrote in 1978.

Langley was not the world’s first aircraft carrier: technically balloon carriers went back as far as 1849, the French started building seaplane carriers in 1911, and the United Kingdom commissioned the HMS Argus, the first full-length flat deck carrier, in 1918. However, Langley was a turning point in the U.S. Navy, which at the time still believed battleships would be the backbone of a modern fleet. It was Cmdr. Kenneth Whiting who began to shake things up.

“Whiting was a man far ahead of his time in the very conservative Navy of the 1920s,” Tate wrote. “His junior years, spent mostly in armored cruisers and in the Navy’s earliest submarines, built up his lack of awe for the so-called backbone of the fleet.”

Eventually, Whiting got his wish, and in 1919 the Navy sent a coal-hauling ship, the USS Jupiter, to Norfolk Naval Shipyard in Virginia to be converted into America’s first aircraft carrier. The strange ship’s tall metal girders and wooden flight deck made it look like a covered wagon from the Wild West, and the crew nicknamed it the “Covered Wagon” as a result.

“The Langley (CV-1) was unpopular, unlovely, un­usual, and ugly—to say the least,” wrote Tate, but, “like her namesake prairie schooner, she would carry a bold breed of pioneers, among them the author, to new horizons.”

The pigeons were right there exploring new horizons with them, though there were some hiccups along the way. At one point, Tate recalled, the pigeon quartermaster “appeared once to protect vociferously” the test firing of the ship’s guns, which were located on either side of the pigeon house, upsetting the birds.

Sadly, the pigeons who so bravely accompanied sailors on the first U.S. aircraft carrier did not spend much time aboard. Vice Adm. Alfred Melville Pride, who also served aboard the Langley, recalled that the birds generally returned to the ship if they were released a few at a time for exercise. But “one bright day” the whole flock was released while the ship was anchored off Tangier Island in the Chesapeake Bay. Instead of returning to the Langley, the birds flew south for Norfolk Navy Yard, where they had been first trained and where they now roosted in the cranes.

“We flew the ‘pigeon quartermaster’ down, and he climbed up, after dark, and caught the pi­geons; but the pigeons never went to sea again,” Pride wrote for Proceedings in 1979.

Despite the pigeons going AWOL, the plans for the Navy’s next aircraft carriers, the Lexington (CV-2) and Saratoga (CV-3), included compartments for pigeons, Pride noted, though the lofts were eventually turned into berthing compartments.

The pigeon’s tour of duty aboard the Langley was over, but Navy pigeons continued to serve with distinction. In 1941, the Navy redesignated pigeon trainers as Specialist X, or SPX(PI) for short. In 1943, the rating was opened up to women, but they had to have the same skills as men, namely “they should have experience working with birds or other animals and know how to drive a car in order to pick up pigeons that got lost during training sessions,” wrote Naval History and Heritage Command.

Pigeons were often used on large balloons, called airships, which conducted stateside anti-submarine patrols. The pigeons came in handy when the radio broke or during radio silence, carrying standard messages in black capsules and emergency messages in red capsules. While the Specialist X rating was phased out after World War II, the humble pigeon still answers the call to serve America from time to time.

Even as recently as 2003, the 1st Marine Division brought pigeons with them to Iraq to serve as canaries in the figurative coal mine for detecting possible nuclear, biological and chemical agents being used against them. The pigeons took the place of chickens, who did not fare well in the Marines’ camp.

“The integration of these new ‘marines’ [chickens] into the Division was difficult,” according to a 2006 Marine history of the invasion. “Several of the birds disappeared immediately, followed by suspicious cooking fires in hidden corners of the camp. Others made their escape from the hands of inexperienced chicken wranglers and ‘deserted’ into the desert.”

So remember, next time you lose cell phone service or you can’t log onto your military computer because it’s nearly as old as you are, there is a solution, and they have tiny little feet and weird red eyes.