From scorpions to sea monsters, some of the Army’s best unit patches were never worn. 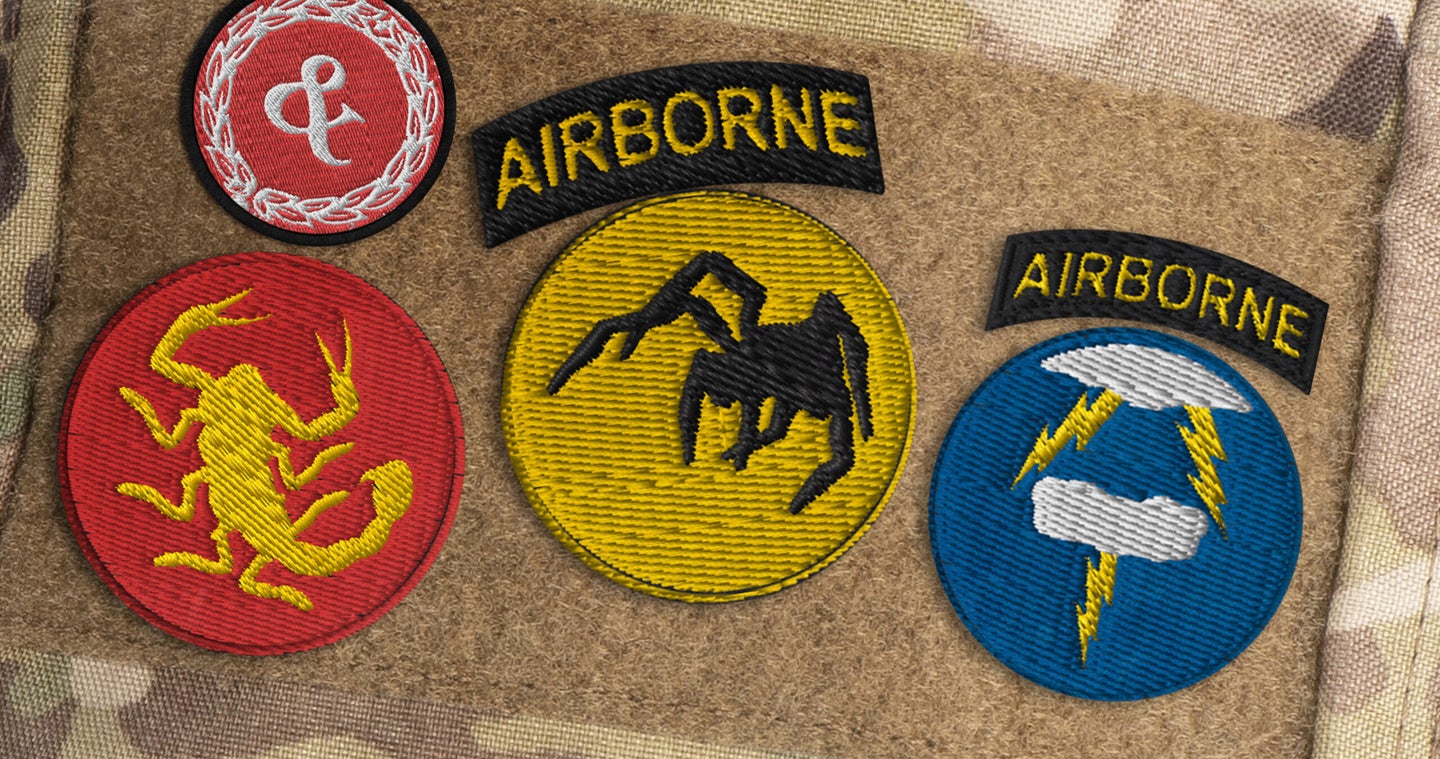 Before he would lead the U.S. 3rd Army across western Europe, Gen. George Patton spent the first half of 1944 in charge of a somewhat different command. It was the First U.S. Army Group, or FUSAG.

Now, every Army unit needs a patch. And the units assigned to FUSAG definitely had some of the best patches around. Though others, like this design from the 11th Infantry Division which was meant to evoke a clock with the eleventh hour in black, ventured into the abstract.

Or this one, from the 135th Airborne Division.

If you’re wondering why you’ve never seen someone wearing an airborne tarantula patch on their uniform, it’s because these units only ever existed in dispatches, radio broadcasts, and the minds of intelligence officers.

On paper, or perhaps based on second-hand information from a double agent or seen from reconnaissance photos, FUSAG was a formidable force. It was theoretically comprised of more than 10 divisions training and preparing to invade the Pas de Calais region of France, where the English Channel was at its narrowest. In reality, it was part of an elaborate deception scheme designed to confuse German military intelligence about exactly where and when Allied forces would invade the European continent.

As part of Operation Quicksilver, FUSAG needed to seem like a real Army. It had a commander in Patton, and some actual units were rotated through the command, giving the impression that Allied forces were much larger than their actual size. Elsewhere, fake training camps were established, complete with tents, mess halls, and ammunition and fuel depots. Members of what would come to be known as the “Ghost Army” built inflatable tanks and other vehicles, staging them to be observed by German reconnaissance flights. Soldiers would sew the patches of these fake units on their uniforms and wear them around. And while “Loose Lips Sink Ships” posters may have been plastered all over the U.S. the nominal members of FUSAG had very loose lips.

At one point Patton, in his fictional role as FUSAG commander, even dined with a captured German general who was about to be sent home in a prisoner exchange.

Elsewhere, a double agent spy known as “Agent Garbo,” in reality a Spanish man named Juan Pujol, spent months passing along information about the entirely fictitious world of FUSAG to German military intelligence officers. Agent Garbo’s reports continued even in the days following the Normandy invasion, thoroughly convincing German military planners that a second invasion was yet to come. He had so thoroughly ingratiated himself to German intelligence that he was awarded the Iron Cross in July 1944.

The U.S. Army would continue to use these deception schemes, complete with fictional units, throughout the rest of the war. The ruse was so thorough that it extended to fictional units and their accompanying and equally fictitious patches.

The patches of these fictional divisions, though, are awesome. Like this one, the scorpion patch from the 22nd Infantry Division.

Or this one, from the 21st Airborne Division.

Only a few select counter intelligence soldiers may have ever gotten to wear these, but if the Army is ever looking to activate another division, it may want to consider a few of these patches for the insignia.

There are lots of colorful and creative patches out there, but who wouldn’t want to wear a huge tarantula patch on their sleeve? A full list of Army “ghost division” patches can be seen here.