The "L" in "Lethality" stands for "Lasers" 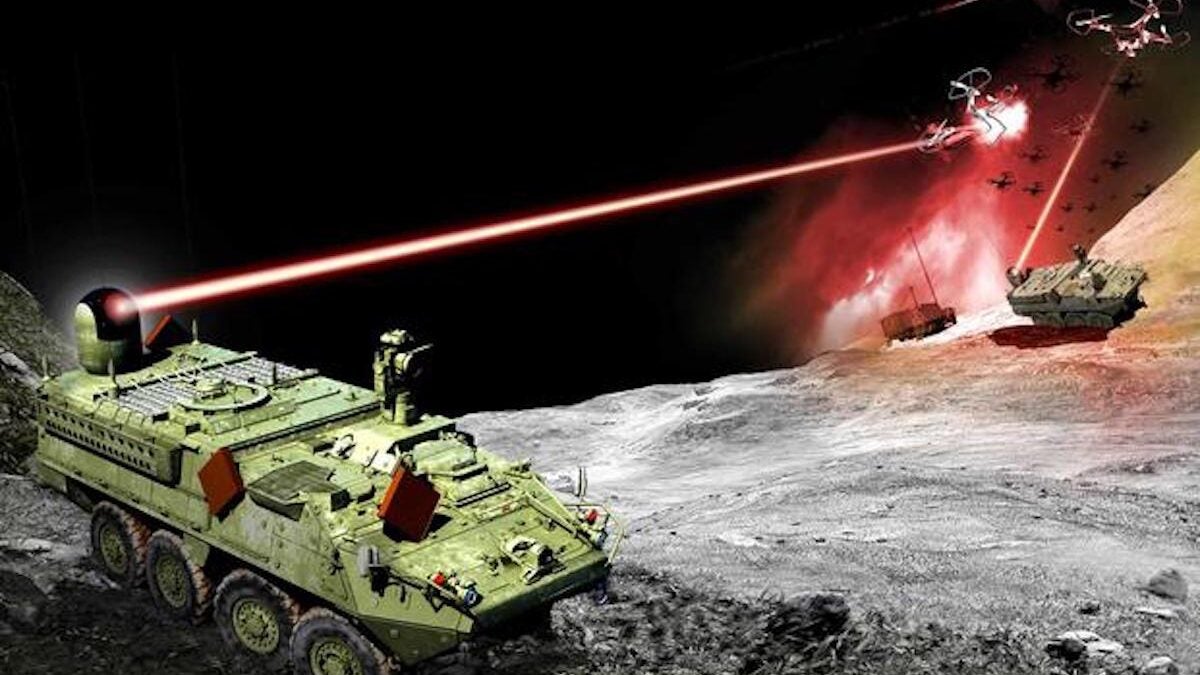 The Directed Energy Maneuver Short Range Air Defense (DE M-SHORAD) system is a 50-kilowatt laser weapon mounted on a Stryker infantry carrier vehicle. Instead of a Stinger missile, think of a high powered beam of energy directed at a target.

The first systems will be delivered to Fort Sill, Oklahoma in September 2022, where they will then begin further testing at White Sands Missile Range in New Mexico, according to the Army’s Rapid Capabilities and Critical Technologies Office (RCCTO).

The DE M-SHORAD is one of several laser weapons that the military has begun fielding in recent years. In 2018, soldiers with the 2nd Cavalry Regiment were testing out the Mobile Expeditionary High Energy Laser at the Grafenwoehr Training Area in Germany. At just 5 kilowatts, though, that system was just a tenth as powerful as the DE M-SHORAD.

Last July, the Army tested out two direct energy weapons at what it dubbed a “combat shoot-off” at Fort Sill. There, systems from Northrop Grumman and Raytheon participated in “a series of vignettes designed to emulate realistic threats and combat scenarios,” the service said in a statement.

The laser-equipped Strykers “faced a number of realistic scenarios designed to establish, for the first time in the Army, the desired characteristics for future DE M-SHORAD systems,” reads the Army statement.

Lt. Gen. L. Neil Thurgood, director for hypersonics, directed energy, space and rapid acquisition with the RCCTO, described it as “the first combat application of lasers for a maneuver element in the Army.”

Having settled on a design from Raytheon and parent contractor Kord Technologies, the prototype is currently undergoing further testing and the Army plans on putting four laser-equipped Strykers into the field beginning in September.

As for the question of why lasers? It’s a matter of lift. Ordnance weighs a lot; light doesn’t.

“Hauling heavy lead and explosives around requires a bunch of logistics and is very costly,” Wesley Freiwald, vice president for Space Superiority and Missile Defense at KBR, Kord Technologies’ parent company, told Popular Mechanics in December. “With solid-state lasers, all you really need is a large battery supply, which, in case of DE M-SHORAD weapon system, is already integrated on the Stryker vehicle.”

The direct energy weapons would represent a rapid technological advancement for short range air defense operations, an area that was often neglected by the military at the height of operations in Iraq and Afghanistan. But as the Army has begun to focus on near-peer adversaries like China and Russia, who are likely to employ the types of assets that the system is designed to counter, lasers have become a greater priority.

It’s also part of a broader push for direct energy weapons across the Defense Department. The Navy has been fielding its own direct energy weapon, with the USS Portland successfully engaging a surface target in the Gulf of Aden last December. The Army has also been working on a roughly 300 kilowatt High Energy Laser Tactical Vehicle Demonstrator (HEL-TVD).

With laser weapons on the horizon, the gauntlet has been set for the Army’s air defenders. Here’s to hoping they’re more accurate than Imperial Stormtroopers.