From Saigon to Kabul: Vietnam vets tell Afghanistan vets how to cope with anniversary of the Taliban’s victory

Afghanistan veterans need to understand they are not personally responsible for the fall of Kabul. 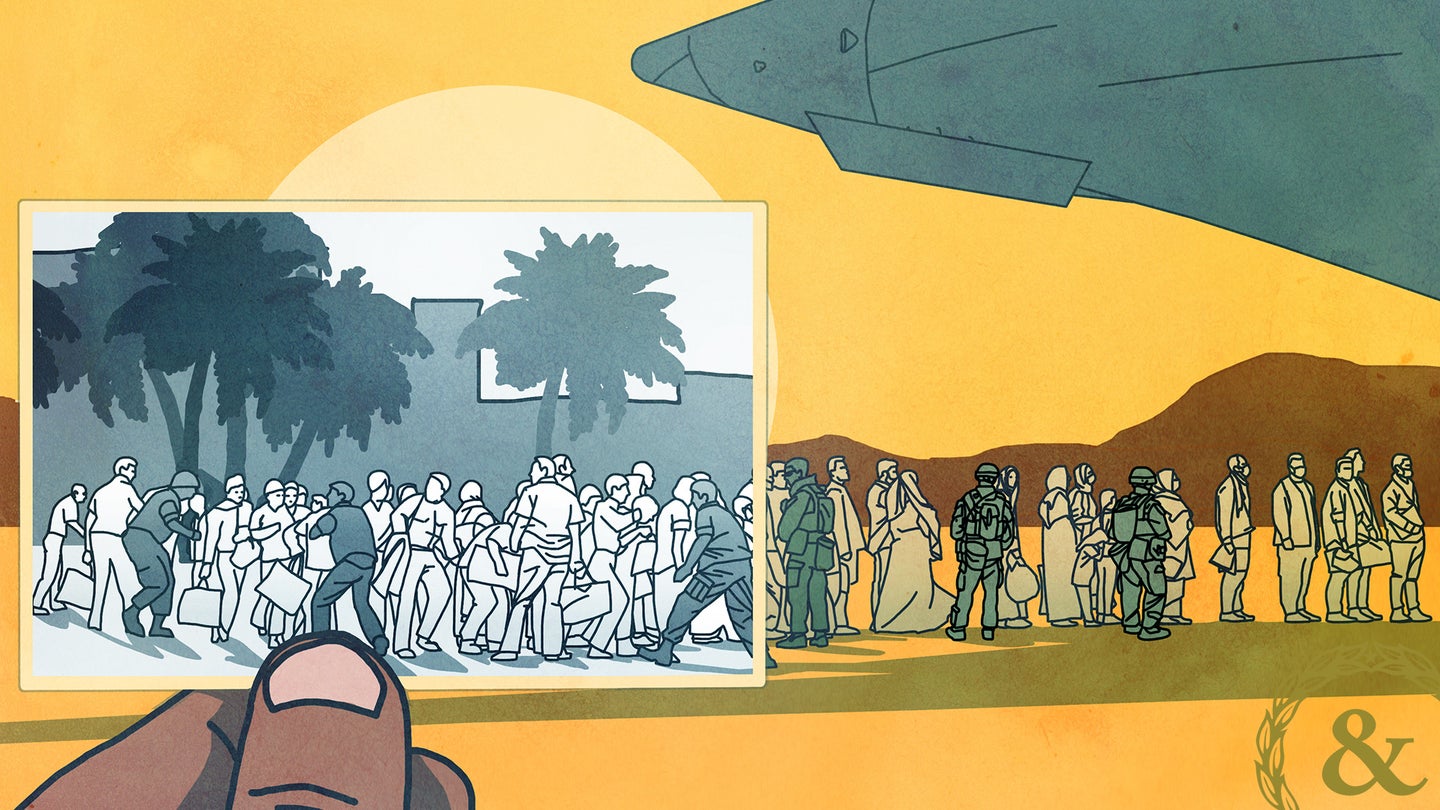 On the first anniversary of the Taliban's capture of Kabul, Vietnam War veterans remind Afghanistan veterans that their service counted for something and they are not personally responsible for the Taliban's victory. (Task & Purpose illustration by Aaron Provost).
SHARE

Former Army Capt. Phil Zook, who had been wounded in Cambodia five years earlier, was trying to take his final exam for his master’s degree when the North Vietnamese captured Saigon on April 30, 1975.

Zook, who was attending Indiana University at the time, had kept in touch with other veterans on campus, and they all watched their enemies take over the capital of a country they had fought to defend. Shortly after beginning his statistics exam, Zook found he was too distraught to continue, so he turned in his paper and walked out.

“The fall of Saigon was just a tragic event – it seemed surreal,” Zook told Task & Purpose. “How could we have invested so much time and so much blood and treasure into it and it just be all over? It didn’t seem like it could possibly end up the way it did.”

Although Zook received some mental health counseling at the time, it would be several years before he was able to recognize that the fall of Saigon had triggered the onset of post-traumatic stress. Now younger veterans may be going through similar experiences after being traumatized by the Taliban’s capture of Kabul and the chaotic evacuation that ensued one year ago, he said.

Task & Purpose asked Zook and other Vietnam War veterans what advice they have for those who fought in Afghanistan for getting through this painful time.

“I think the best thing is to recognize it: That you’re going to come into a period of time – a date or a number of weeks, or a month – and you’re going to experience something,” Zook said. “It’s something you really can’t just lock yourself away from. Any veteran that tries to do that is making a real mistake. Whatever the trigger is, whether the date that Afghanistan fell, or Vietnam fell, or when you were wounded, or when your RTO [radio telephone operator] was killed, or your point man was killed – those triggers are out there. They sneak up on you. So, you’ve got to be prepared for them.”

While Afghanistan veterans need to be prepared for the first anniversary of the fall of Kabul to be painful, they also need to understand that they are not personally responsible for the war’s outcome, said Zook, who appeared in the 2017 documentary Just Like Me: The Vietnam War — Stories From All Sides.

“Deal with the fact that it wasn’t anything that you caused – that it wasn’t any sort of shortcoming or failure on your part to do what you were called upon to do,” Zook said. “It was ordained to end up that way; or – like they say – it was a lot higher paygrade than what my paygrade was.”

For Zook, dealing with his trauma from Vietnam and the fall of Saigon included seeking mental health counseling again around 1990. It turned out to be much more beneficial than the cursory help he had received 15 years earlier.

“I found out that I had to think about it,” Zook said. “I had to share experiences with guys I’d served with, with somebody who was interested – not tell them just war stories, or something like that – but try to explain feelings and try to explain how it has kind of affected me.”

Part of Zook’s recovery included learning how to deal with painful anniversaries. Spring would typically be a very hard time for him because he was in combat so often in the month leading up to May 24, 1970, when he was wounded.

“That’s kind of the thing about Vietnam, maybe,” Zook explained. “It’s not tied to a location, so much as it’s tied a lot to dates, I think.”

Zook arrived in South Vietnam in December 1969, and he served as a platoon leader with the 1st Battalion, 7th Cavalry Regiment, 1st Air Cavalry Division – the same unit that then-Army Lt. Col. Hal Moore led during the events depicted in the book We Were Soldiers Once … And Young. When President Richard Nixon ordered U.S. troops into Cambodia the following spring, Zook took part in the incursion. He recalled what happened on the day he was wounded.

“Our point man had been killed – we’d got into a bunker complex before we knew what it was – and he’d been killed, and we spent about three hours – three, four hours – trying to get up to his body, clear bunkers,” Zook recalled. “We had helicopter coverage over us. Every time the helicopters would break station, they’d try to mortar us. At six o’clock, when the helicopters broke station, they pulled out the mortar again, and mortared us, and we had three rounds land on my platoon. That day, we took four killed and 24 wounded.”

Decades later, there are still certain times of year when Zook feels particularly low, he said. When he thinks about it, he remembers what was happening in Vietnam at the time.

The first anniversary of Kabul’s fall is a time when Afghanistan veterans need to get together, Zook said. He added that he and his fellow Vietnam veterans get through tough times by talking to each other. One friend in particular calls Zook on the anniversary of their platoon sergeant’s death to go reexamine every action he took that day.

“Everybody has a slightly different picture of what happened,” Zook said. “Until you kind of share that information with somebody else – no, it didn’t happen that way; no, somebody didn’t screw up; or whatever might be the situation – then, maybe that fills in that little crack that kind relieves some of the pressure off of the individual.”

Former Air Force Staff Sgt. James Wong also urged Afghanistan veterans to talk to someone whom they trust as the anniversary of Kabul draws near. Wong told Task & Purpose that he waited 50 years to seek help after returning from Vietnam in 1968, and that was a mistake.

Before time can begin healing wounds, veterans must acknowledge that they have an invisible injury, Wong told Task & Purpose.

“I might also add that what doesn’t work, is pretending that we’re ‘fine,’” Wong said. “Drugs and alcohol may provide temporary relief, but numbing is not the answer. They won’t fix anything. In this moment, we are called upon, one more time, to find our courage and engage with the enemy, but we don’t have to do it alone. We must be willing to fight as if our lives depend on it – because they do – and because we are worth fighting for.”

Wong is currently a consultant with the veterans non-profit group Volunteers of America, which helps veterans, children, and senior citizens. He said he is dedicated to helping veterans take part in a healing process so they can come to terms with the trauma that they’ve experienced.

“A lot of times, there’s anger and rage because they feel like they were used and abused, or not supported, and what they did didn’t mean anything,” Wong said. “Of course, what they did does mean something, and that’s what they need to know.”

Afghanistan veterans should also give themselves credit for being willing to protect their country and the sacrifices they made to defend the ideals of a free country, he said.

Like those who served in Vietnam, the veterans of America’s war in Afghanistan should also learn about moral injury, which is caused when people witness or are ordered to take part in events that they are ashamed of and go against their moral code, Wong said.

“I think many, many, many of us that came back from Vietnam felt like our country had betrayed us and abandoned us,” Wong said. “I think the same is true of the Afghanistan veterans.”

Veterans from both the Vietnam and Afghanistan Wars understand what it feels like to suffer and lose friends, only to watch as all that they fought for go to waste, said former Defense Secretary Chuck Hagel, who served as an Army sergeant in Vietnam in 1967 and 1968.

“It’s a feeling like: Well, none of that counted,” Hagel told Task & Purpose. “What were we doing and why did we do this? This was all wasted. I think what you’ve got to do on a personal basis; you’ve got to adjust your thinking to the reality of the world. The world is full of unfairness and injustice. Your focus, whatever you do, should be on helping make a better world for all people. And I think if you stay focused on that, you’re not haunted by as many ghosts as I think our Vietnam veterans were – and probably some of the Afghan veterans have been.”

The Afghanistan War began as a response to the Sept. 11, 2001 attacks, but after the U.S. military ousted the Taliban, its mission became unclear, as did the reasons why troops should stay in the country, Hagel said. Eventually, the Afghans saw American service members as occupiers, not liberators.

It is up to the generation of service members who served in Afghanistan during America’s longest war to make sure their country learns from the many mistakes it made, he said.

“They have a responsibility because they have an experienced voice,” Hagel said. “They know what they’re talking about like no other group of people in this country. They were there. They served. They have a responsibility to do what they can to ensure the next time these kinds of challenges erupt – they’ll come in different ways, but they will come – about getting involved in another country or invading and occupying another country, that they have a strong voice in this.”