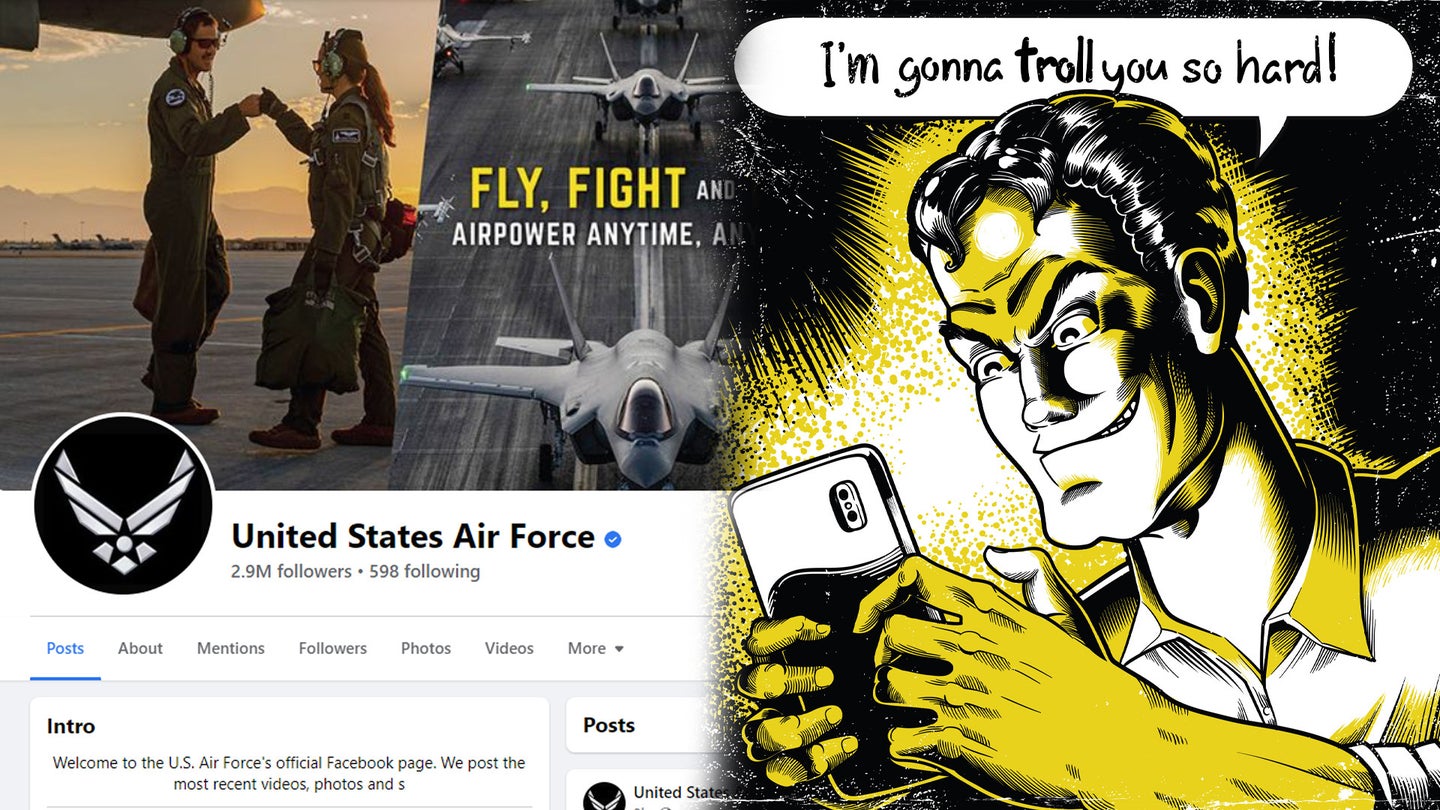 A photo composite of the Air Force's Facebook page and a stock illustration of an internet troll. (Facebook/Getty Images.).
SHARE

The Air Force can no longer delete comments or ban users from its social media sites based solely on their opinions, per the terms of a settlement with a retired pilot, who had filed a federal lawsuit after his comment criticizing the service was removed from the Air Force’s senior enlisted leader’s Facebook page, according to a commentary in the Wall Street Journal.

The commentary was written by Terence J. Pell, president of The Center for Individual Rights, a nonprofit group that seeks to limit federal and state government power. The center represented former Air Force Maj. Rick Rynearson, who describes himself on Twitter as a “Retired military officer who refused an order to assassinate an American citizen & constitutional rights activist who has defended the Constitution in court.”

Rynearson also received the Distinguished Flying Cross with Combat “V” for a March 20, 2003 mission in which he served as an AC-130U co-pilot, according to his award citation. He and the rest of the aircraft’s crew supported special operations forces, who were outnumbered in a battle against Iraqi troops.

The social media issue at hand first arose in November 2020, when Chief Master Sergeant of the Air Force JoAnne Bass wrote a post about Thanksgiving on her official Facebook page, in which she urged airmen to think about what they are thankful for, Pell wrote in the Wall Street Journal.

“Mr. Rynearson replied that he was thankful that other branches of the military were concentrating on conducting warfare so that the Air Force could concentrate on ‘making sure we all feel good about ourselves’ and that ‘nobody is offended or feels like a victim,’” Pell wrote.

Within hours, all Rynearson’s comments had been removed from Bass’ official Facebook page and he had been banned from posting anything else on the site, Pell wrote. After Rynearson was unable to contact Bass, he filed a lawsuit in August 2021, arguing that his 1st Amendment rights to free speech had been violated. In the past week, a court approved a settlement with the Justice Department, which represented the Air Force, allowing Rynearson to post on Bass’ Facebook page. The Air Force also agreed to update its social media policy to prevent users from being banned for their opinions.

Bass’ official Facebook page has a disclaimer about the Department of the Air Force’s comment policy that now makes clear, “Users will not be banned, based on the viewpoint expressed in any comments.”

“Air Force leaders are committed to engaging in online forums to aid the understanding, trust and support of the U.S. population, allies and partners while also acting to deter, dissuade and otherwise influence adversaries,” the Air Force said in a statement to Task & Purpose. “Our airmen and their families deserve official platforms that promote a culture of respect within the Air Force.”

Bass has faced firestorms of criticism for other past Facebook posts. In October 2020, an enlisted airman asked on her Facebook page whether her last name was pronounced the same as a type of fish or a musical instrument. She replied by telling the airman to call her that Monday. That prompted a four-day debate on social media about whether Bass was being too harsh or correctly confronting a troll.

Then in February 2021, Bass apologized after she posted on her Facebook page an article from an airman who said she struggled as a parent because her former husband was an Air Force pararescueman, who was often away from home. But Reddit users were outraged to see the story on Bass’ Facebook page. They claimed that both Bass and the airman who wrote the article had unfairly criticized the pararescueman for spending so much time on deployments or training.

Rynearson’s lawsuit over commenting on official Air Force social media platforms is in line with other legal challenges that he has filed to argue that his rights had been violated.

After being questioned by Border Patrol agents in Uvalde, Texas, for more than half an hour in 2010, Rynearson filed a lawsuit claiming that he had been illegally detained. The case was dismissed five years later by the U.S. Court of Appeals.

Separately, Rynearson was successful in getting Washington state’s cyberstalking law declared unconstitutional after he repeatedly criticized Clarence Moriwaki, an activist who was working on a memorial for Japanese Americans who had been interned during World War II. Rynearson argued that Moriwaki should have also condemned the U.S. government for detaining people indefinitely as part of the war on terrorism.

“He just won’t leave me alone,” Moriwaki told the Associated Press in July 2017. “I told him to stop posting about me, to stop contacting me, and he won’t. He’s a classic cyber bully.”

But the Kitsap County Superior Court vacated the protection order the following year, finding that Rynearson had not committed “stalking conduct.”

“There is no evidence that Rynearson surveilled, monitored, tracked or otherwise intentionally placed himself in proximity to Moriwaki for the purpose of stalking him, contacting him or interacting with him,” Judge Kevin Hull of Kitsap County ruled.

After this story was first posted, Rynearson provided Task & Purpose with a statement arguing that Kitsap County Superior Court’s ruling shows that he did not send non-step messages to Moriwaki.

“Moriwaki would have you believe I kept contacting him, ie ‘stalking’ him,” Rynearson said. “That is false. I simply criticized Moriwaki on my social media and he did not like me talking about him and his public role. So he lied that I was contacting him. As the Kitsap County Superior Court ruled in its decision, however, I ceased contacting Moriwaki when he made it clear he did not wish for me to contact him.”

In a separate ruling, U.S. District Judge Ronald Leighton ruled in February 2019 that the state’s cyberstalking law violated the First Amendment because it criminalized “non-threatening speech.” The judge took issue with how the law describes cyberstalking as trying to “harass, intimidate, torment, or embarrass any other person.”

“As a result even public criticism of public figures and public officials could be subject to criminal prosecution and punishment if they are seen as intended to persistently ‘vex’ or ‘annoy’ those public figures, or to embarrass them,” Leighton wrote.

UPDATE: After this story was first posted, Rynearson contacted Task & Purpose to explain that the order of protection filed against him had been vacated by Kitsap County Superior Court. This story has also been updated with a statement from Rynearson.