"It was a day that I had trained my whole life for." 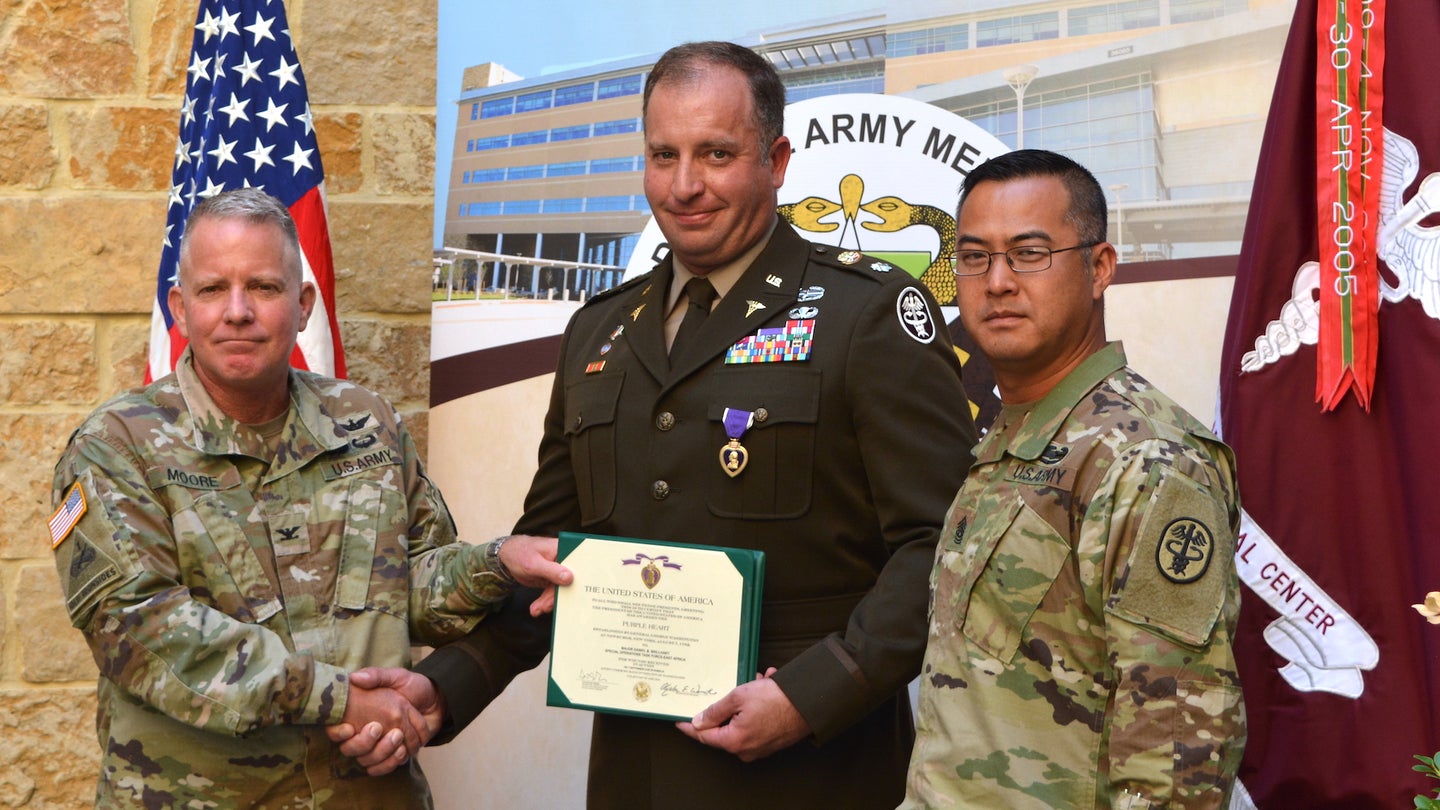 An Army physician now stationed at Fort Hood’s Carl R. Darnell Army Medical Center in Texas received the Purple Heart earlier this month two years to the day after he was wounded during an ambush in Somalia in 2020.

“The men that I served with out there on the ground, they were there, and it was a day that I had trained my whole life for,” said Lt. Col. Daniel Brillhart, who was presented with the commendation on Sept. 7. “What I didn’t know at the time was that surviving that day, wasn’t the only thing, it was that you were going to have to survive that day for every day thereafter.”

While news of the ambush was previously reported by media outlets like Reuters, a recent DVIDS news release regarding Brillhart’s Purple Heart sheds additional light on the intense 2020 ambush.

According to the release, Brillhart, along with a contingent of U.S. and Somali partner forces, endured heavy small arms fire after a vehicle-born explosive device detonated 50 meters from their position on September 7, 2020, in an unspecified part of Somalia.

Despite his injuries, Brillhart quickly lept into action, providing medical care and evacuation for other wounded U.S. and Somali personnel before manning a fighting position for 72 hours, “inflicting heavy losses on enemy forces,” according to the release.

​​Brillhart and his team “endured stiff enemy resistance while manning the fighting positions during the attack and providing medical treatment to over two dozen friendly casualties, which ultimately [allowed] the element to fight their way back to friendly lines without further losses,” according to the Army.

By the end of the firefight, militants had reportedly killed three Somali special operations forces personnel, according to Reuters. (In an email to Task & Purpose, U.S. Africa Command confirmed that the incidents detailed by Reuters and Brillhart’s Purple Heart announcement were “related.”)

At the time, al-Shabaab — an Islamic extremist group linked to al-Qaeda — claimed to have inflicted significantly more damage on the joint U.S.-Somali force than widely reported.

“We attacked U.S. and Somali forces called Danab in Jana Cabdalle village with a suicide car bomb. We killed four U.S. officers, and 16 Somali forces which they trained,” an al-Shabaab spokesperson said at the time. “We also wounded 12 Somali soldiers. We also destroyed 3 U.S. armored vehicles.”

However, a spokesman for AFRICOM said at the time that only one U.S. soldier — likely Brillhart — had suffered non-life-threatening injuries.

U.S. forces have a long history in Somalia and east Africa stretching back to the early 1990s. Since 2007, U.S. forces have been deployed to the region to combat al-Shabaab and other militant groups.

While Brillhart was the only major injury in the September 2020 ambush, other U.S. and partner forces operating in Africa haven’t been as lucky in recent years: In January 2020, an attack on a U.S. airbase in Manda Bay, Kenya left one Army specialist and two contractors dead.

Although then-President Donald Trump previously ordered all U.S. military personnel out of Somalia in December 2020, the Pentagon earlier this year announced that hundreds of troops would redeploy to the embattled country, although it would not be considered a combat deployment and would be strictly “an advise and assist and training mission,” as an Army spokesperson told Task & Purpose in May.

It can take time for all the paperwork involved in a Purple Heart to process, sometimes more than a decade. But Brillhart’s award is a solemn reminder that, while many consider the Global War on Terror essentially over, there are still thousands of U.S. service members deployed overseas in harm’s way.