Who gets to call themselves a ‘combat veteran’?

The debate is back. 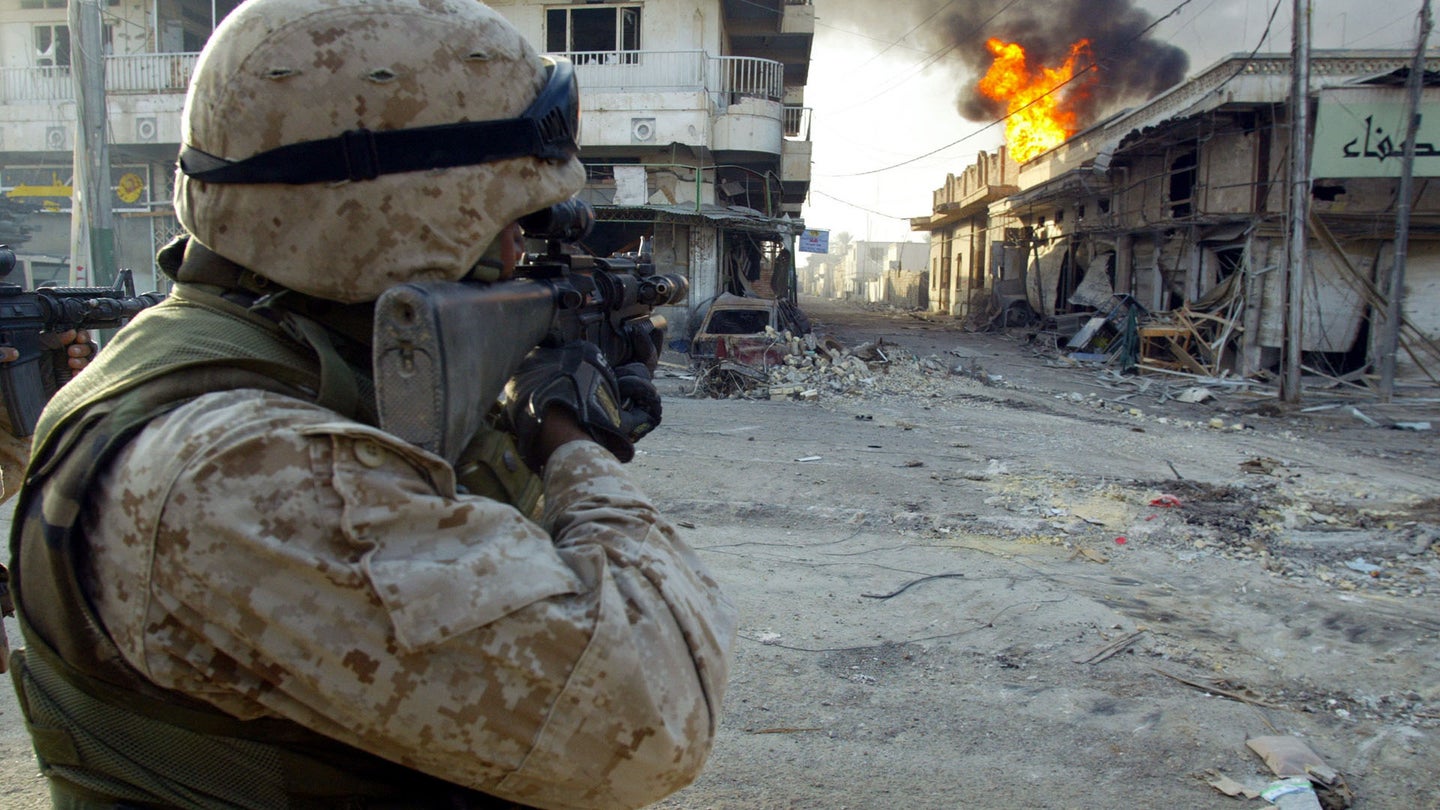 A U.S. Marine from the 3/5 Lima company points his rifle at a building as it burns in the restive city of Fallujah,14 November 2004, 50 kms west of Baghdad, Iraq. (Patrick Baz/AFP via Getty Images).
SHARE

The recent controversy surrounding whether a Marine veteran running for Congress in Minnesota had served in combat underscores just how nebulous the term “combat veteran” can become when both troops and veterans constantly debate whose downrange service counts and whose does not.

Tyler A. Kistner is the Republican candidate in Minnesota’s 2nd Congressional District, southwest of Minneapolis-Saint Paul. He served on active duty first as a Marine infantry officer and then as a special operations officer from January 2011 until October 2019, according to Marine Corps Manpower & Reserve Affairs. During that time, Kistner deployed to Tunisia as part of Operation Inherent Resolve from September 2017 until April 2018, and he had spent other times at sea.

When he unsuccessfully ran for Congress in 2020, Kistner said “I’ve been in fights, I’ve been in combat,” the Minnesota Reformer reported. And during his current campaign, the Congressional Leadership Fund — a Republican super Political Action Committee — ran a political advertisement in September claiming that Kistner had made four combat deployments.

But the super PAC later told the Minnesota Reformer that it had distributed an “incorrect version of the ad and fixed it ourselves on the same day.”

Kistner campaign spokesman Billy Grant said that the Congressional Leadership Fund did not consult with the campaign prior to running the advertisement because super PACs are not allowed to do so.

“Tyler Kistner never claimed to be a combat veteran but discussed how he advised, assisted and at times accompanied a partner force during the conduct of three combat operations as shown in an award citation from his deployment to North Africa,” Grant told Task & Purpose. “As a Special Operations Team Commander, it was his role to advise the partner force leaders, not specifically conduct direct combat, but rather manage and control combat operations through maneuvering of personnel and support assets.”

While Tunisia is not Afghanistan or Iraq, U.S. troops there have gone on dangerous missions. Task & Purpose first reported in 2018 that two Marine Raiders had received valor awards for their bravery during a February 2017 firefight with Al Qaeda while partnering with local forces in North Africa. The New York Times subsequently reported the engagement took place along Tunisia’s border with Algeria, noting that the Tunisian government wanted to keep its cooperation with the U.S. military as quiet as possible.

The Kistner story has gained added media attention because it comes right after another political candidate, J.R. Majewski, was caught embellishing his service record by claiming he had made combat deployments to Afghanistan, when military documents obtained by the Associated Press show he had been deployed to Qatar instead.

Majewski, who is running as a Republican in Ohio’s 9th Congressional District, also claimed that he had been demoted while in the Air Force for getting into a brawl when actually he had received nonjudicial punishment for drunken driving, the Associated Press first reported.

While it’s expected that a political candidate’s military background will come under scrutiny during an election, America’s wars over the past 20 years have upended traditional notions of ‘combat’ and, in turn, what it means to be a ‘combat veteran.’

Drone pilots have proven to be vital to supporting troops on the ground, even if they are physically located thousands of miles from the actual battlefield. The U.S. military is also facing a serious threat of cyber attacks. But troops and veterans who had deployed downrange were outraged when the Defense Department planned to give drone pilots and cyberwarfare specialists their own medal. Instead, the Pentagon decided to give them an R device for existing medals.

The U.S. military has been forced to play catchup in recognizing the evolving nature of combat. For example, many enlisted Marines consider a Combat Action Ribbon to be proof of combat experience, but it was not until March 2006 that Marines who had encountered improvised explosive devices were eligible to receive the award. Even now, Marines who’ve been in combat situations are not automatically guaranteed to receive a CAR.

Just like the never-ending debate over whether a soldier who completed Ranger training holds the title of “Ranger,” the issue of who counts as a combat veteran is one of the many ways that veterans and troops question the military service of people who they believe are taking honor from people who rightfully deserve it.

The issue also comes up when veterans who deployed to war zones in nominally non-combat roles run for office. Consider in 2019, when Task & Purpose asked Navy veteran Pete Buttigieg — who is currently serving as the U.S. secretary of transportation — if he considered himself a combat veteran for deploying to Afghanistan as an intelligence officer five years earlier.

“Some say you are a combat veteran if you have a Combat Action Ribbon (I do not),” Buttigieg replied. “Others say deploying to a combat zone makes you one. I simply consider myself a veteran, and I’ll leave it to others to decide what else to call it.”

Indeed, we live in an age when some vocal veterans are constantly arguing over who should be considered a combat veteran — or even veteran at all, said Katherine Kuzminski, director of the military, veterans, and society program at the Center for a New American Security think tank in Washington, D.C.

“It truly is splitting hairs and it does seem to feel like there is a lot of debate within the veteran community,” Kuzminski told Task & Purpose. “There’s a lot of gatekeeping about who counts as a veteran and who doesn’t.”

The Department of Veterans Affairs defines combat veterans as troops who have received hostile fire pay or imminent danger pay at any time during their service, earned a combat service medal, or have military service documentation that show they were in a combat theater, Kuzminski told Task & Purpose.

The debate over who counts as a combat veteran and who doesn’t becomes even more pronounced when politicians tout their own military service, Kuzminski said.

“I would say that, in some ways, this is the problem about using your military affiliation, your veteran affiliation, or your combat veteran affiliation for a political purpose,” Kuzminski said. “I think the [civil-military] norm here would be just to not quote it at all, although certainly we’ve seen a number of candidates across the country, who definitely referred to their military service as a qualifier for why you should vote for them.”

And despite the invocation of veteran status as a political signifier, the skills that troops learn from combat experience ironically may not automatically make them better public servants, said former Marine Maj. Kyleanne Hunter, a senior political scientist at the RAND Corporation.

“What we really want, particularly if you’re talking about public service, are values that may or may not have anything to do with combat: Leadership qualities; the ability to work with people who live anywhere; the need to serve people who aren’t necessarily like you — these are all qualities that we want in our elected officials, and they really have nothing to do with whether one got shot at,” Hunter told Task & Purpose.

Hunter also said she found it disturbing that gatekeepers in the veterans community continue to qualify other veterans’ military service based on factors that are beyond their control, she said. Service members do not decide if they deploy, where they deploy to, or how dangerous their deployments will be.

It is possible for a service member to deploy to a war zone but never venture outside the wire; while the wars in Iraq and Afghanistan have shown that troops in logistics and supply specialties are just as valuable to operations as other service members in combat arms, she said.

“At the end of the day, such a small percentage of our citizenry actually even raises their right hands to serve that I think splitting hairs around who’s a combat vet and who’s not is not helpful, and it leads to things that we’re seeing here, where people will use the term ‘combat deployment’ or ‘combat’ to try to mean legitimacy in some way,” Hunter said.

The issue over how to define a combat veteran can also be challenging for the media, especially if reporters are unaware of the many minutiae to look for in a veteran’s service record, an issue that often comes up. In July, the Associated Press advised reporters to be specific about what a veteran’s job in the military was to avoid just such exaggerations.

The myriad of important details that define military service is one reason why media outlets should hire more veterans to explain complicated issues that affect troops and veterans, said Zack Baddorf, executive director of Military Veterans in Journalism, which helps veterans get jobs in the media.

“Describing someone as a combat veteran can mean different things to different people, including within the veteran and military communities,” Baddorf told Task & Purpose. “But Americans deserve nuanced news coverage when it comes to military and veteran affairs. Reporters should provide clarity and details to explain specific individuals’ military service so news consumers can make their own call on whether they consider someone a combat vet or not.”