Meet the exquisitely mustachioed Marine who fought in three wars

These moostache hairs were not policed. 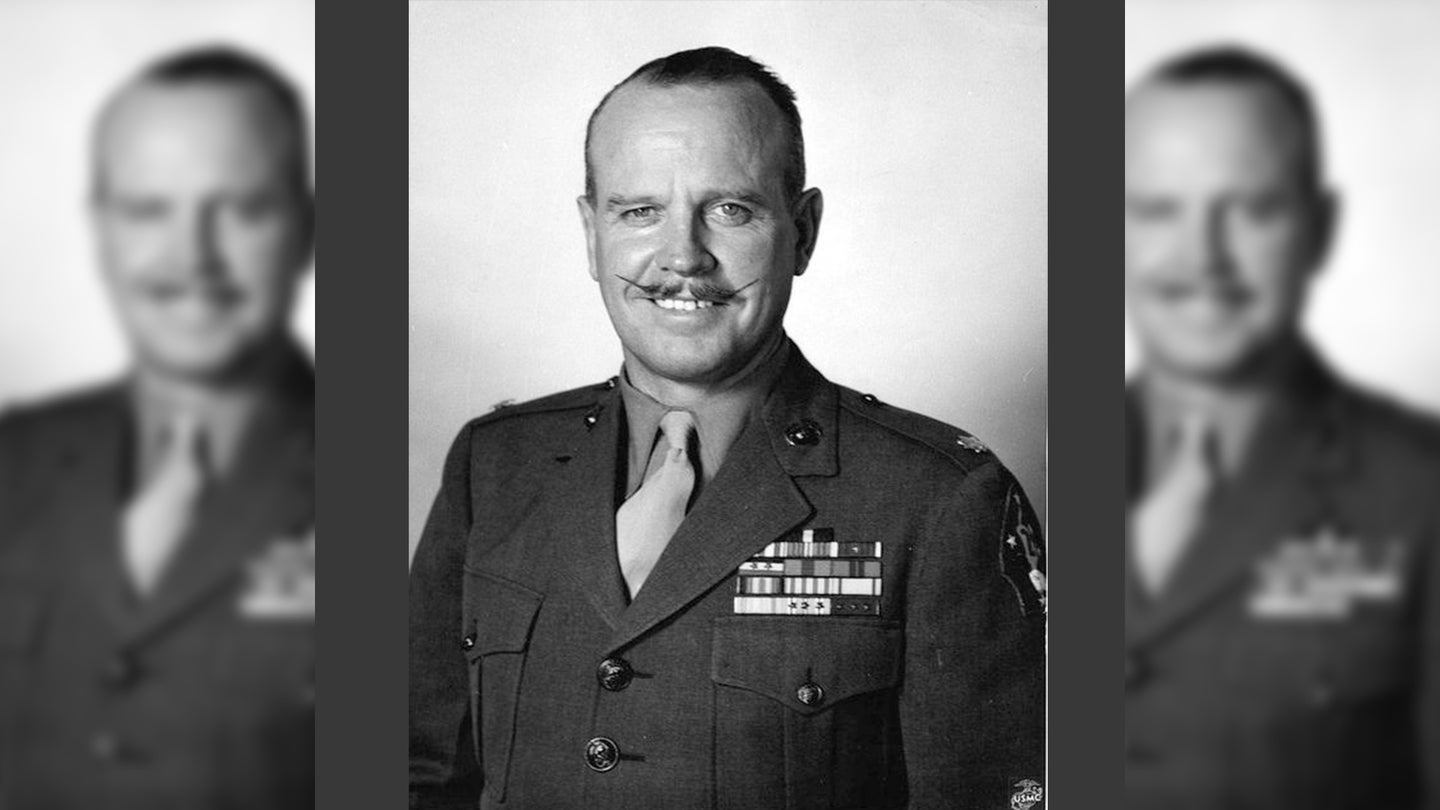 For all those aspiring to grow some finely trimmed facial hair, take note. This is Col. Henry “Jim” Pierson Crowe. Decorated Marine, veteran of three wars, and owner of a damn fine mustache.

Now, before anyone tries to pull off this look today, today’s Marine Corps would take issue.

Despite Crowe’s distinctive bristles reportedly saving his life by making him identifiable to his men in 1944, modern Marine Corps uniform regulations only allow mustaches contained within the “margin area of the upper lip.” So while Crowe’s “moostache hairs” might need policing in 2022, his record speaks for itself.

Born in Kentucky and raised in Illinois, Crowe first enlisted in 1918 and served in the immediate aftermath of World War I in France. After a brief foray back into the civilian world, he enlisted again in 1921 and was sent to Santo Domingo, Dominican Republic, as part of the Marine contingent that had occupied the country since 1916. This was part of the so-called “Banana Wars” involving U.S. intervention throughout the Caribbean in the first decades of the 20th century. Crowe would also be sent to Nicaragua in 1928.

According to a 1991 article in the former Marine Corps history bulletin Fortitudine, the “Jim” moniker likely stemmed from “a Marine Corps then given to nicknames, and where Campbells were ‘Soupy,’ and Rhodes were ‘Dusty,’ and Finns were ‘Mickey,’ there was an inevitability to his being ‘Jim’ Crowe.”

In between deployments overseas, Crowe was stationed at Quantico, Virginia, where he played for the Marine Corps football team and served as a marksmanship expert, competing in national shooting competitions and winning the Distinguished Marksman medal in 1927.

In 1934, then a gunnery sergeant, Crowe was promoted to Marine Gunner, a warrant officer rank. Assigned to San Diego, Crowe was soon sent to Beijing as part of the American embassy guard for three years, from 1936 to 1939.

By 1941, Crowe was serving as a Chief Marine Gunner, perhaps one of only around five in the Marine Corps at that time according to Fortitudine, assigned to the 8th Marines in California.

With the outbreak of World War II in the Pacific, Crowe’s regiment was sent to American Samoa, where he was promoted directly to captain. This was perhaps fitting, as by some accounts Crowe “contended that there was absolutely no requirement whatsoever for Lieutenants, citing as proof Smedley Butler who he claimed (erroneously) made Captain without ever being a Lieutenant.”

As the commander of the regimental weapons company at Guadalcanal, he was awarded both the Bronze Star and Silver Star.  It was there that he was heard saying, while leading an attack on a dug-in Japanese position, “Goddamn it, you’ll never get the Purple Heart hiding in a foxhole. Follow me!”

At Tarawa, as commander of the 2nd Battalion, 8th Marines, he was awarded the Navy Cross. Less than a year later, when the battalion landed at Saipan, the mustache may have saved Crowe, already shot in the lung at that point, from being taken out by one of his own men.

“Just as the man was aiming, Jim Crowe raised his head feebly, identified himself by twirling his famed red mustache,” reads a 1944 dispatch from Time Magazine.

That article also includes a note Crowe’s drink of choice, something referred to as a “Baptist cocktail.” Crowe’s recipe was simple: “‘Go into the kitchen, get a tall glass, and put into it everything you can reach without taking more than three steps.’”

That could apparently include gin, whiskey, or Tabasco sauce. While that may seem like an unholy concoction, Time reported that Crowe “thrive[d] on it.”

Wounded at Saipan, he would serve in training duties for the rest of the war.

In 1950, he was sent to Japan to assist in preparations for the amphibious landing at Incheon, Korea. Promoted to Colonel in 1951, he would continue serving in various assignments until his retirement in 1960, after 40 years of service.

Crowe passed away in 1991 at the age of 92. The mustache? Worthy of a toast with a “Baptist cocktail” any time.