The blue and grey design was a nod to the reconciliation of soldiers from former northern and southern states under one command. 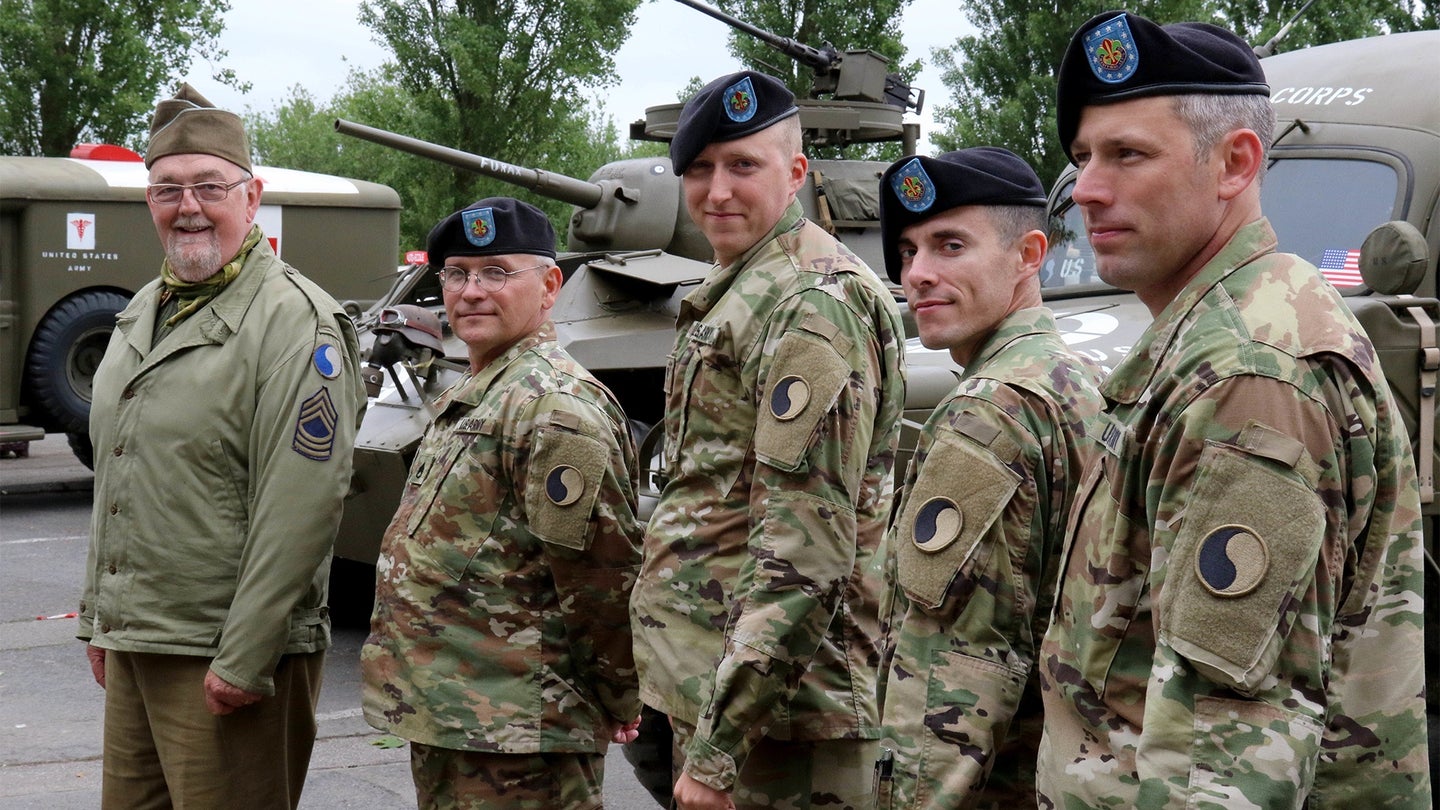 Soldiers pose for a photo with a French D-Day reenactor during the 72nd Anniversary of D-Day showing off their patches that symbolize the coming to together of opposing armies post-Civil War to make one integrated unit. (U.S. Army photo by Capt. Joe Bush).
SHARE

More than 150 years after the end of the Civil War, the military is going through a reckoning of sorts, ridding itself of memorials to the Confederacy. At least one National Guard unit patch will remain, though.

In an announcement this week, the Naming Commission – yes, that is the official name – wrote that the National Guard’s 29th Infantry Division should keep its distinctive blue and gray insignia. The unit will, however, remove any language from the heraldry description that commemorates the Confederacy.

“The description language should be modified to reflect the rich history of the 29th, with focus on the unification of American citizens through service in the 29th,” retired Navy Adm. Michelle J. Howard, chair of the naming commission, wrote in a letter. “The Community of the 29th ID indicates that they view the symbol as a unifying symbol for America and is imbued with the sacrifices and service of past 29th ID members.”

The history of the insignia dates back to World War I, when the Army first began using patches to differentiate between infantry divisions. The 29th was recruited from the mid-Atlantic states, from Maryland and Delaware to Washington, D.C., and Virginia. Today, it includes National Guard units from as far away as West Virginia, Kentucky, and the Carolinas. When it came time to come up with a patch, one of the division’s officers, James Ulio, suggested “yin-yang” blue and gray design, a nod to the reconciliation of soldiers from former northern and southern states under one command. It ended up becoming the first officially approved division patch in the Army.

The 29th Infantry Division would go on to earn plenty of accolades in the ensuing world wars. In 1944, it was the unit that went ashore along with U.S. Army Rangers at Omaha Beach, landing in the first waves of the invasion of France. Plenty of those blue and gray patches can be seen in Saving Private Ryan, although that also includes the lamentable Cpl. Upham character.

Still, it’s a very storied unit with a lot of history behind the insignia.

The Naming Commission, which was established in 2021, has a complicated task: purging the military of any remaining links to people who both served in uniform and also tried to secede from the country. They’ve already issued recommendations for renaming nine Army bases that were named for Confederate generals, among them some of the Army’s largest bases like Fort Benning in Georgia, Fort Bragg in North Carolina, and Texas’ Fort Hood. A final report is due to Congress on Oct. 1, 2022, which will contain recommendations on renaming more than 700 ships, buildings, awards, and streets named for Confederate officers.

As part of that effort, the 29th Infantry Division would also be a unit that would stop displaying Confederate battle flags.

So, for now, the 29th Infantry Division insignia is iconic enough to remain.