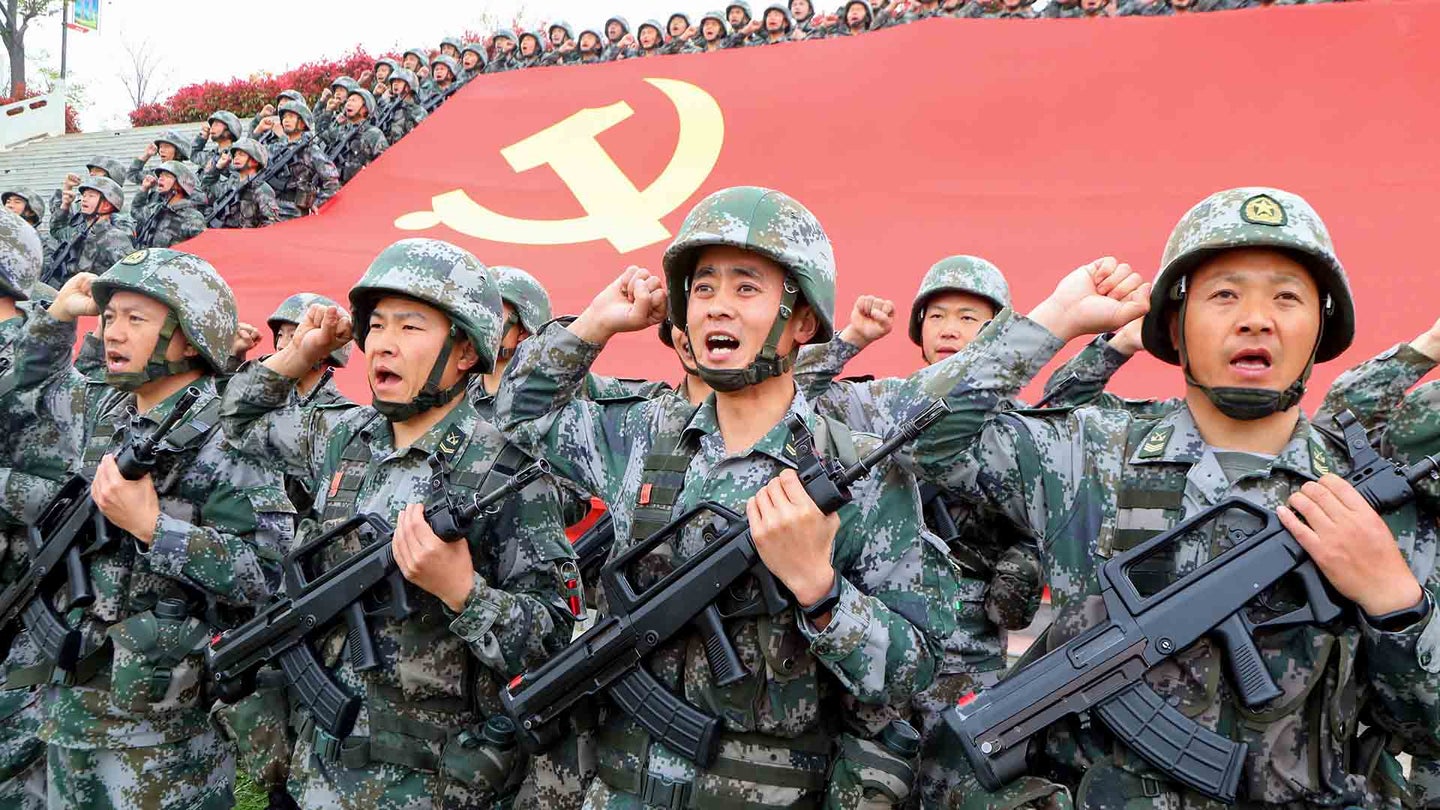 Members of the Communist Party of China (CPC) review the oath of joining the party in front of the party flag on April 13, 2021 in Luoyang, Henan Province of China. (Photo by Jia Fangwen/VCG via Getty Images).
SHARE

The Chinese People’s Liberation Army is scheduled to hold live-fire military exercises in five broad areas around Taiwan following House Speaker Nancy Pelosi’s visit to the island nation’s capital of Taipei, but experts say China is not following Russia’s example by moving invasion forces in place under the auspices of holding exercises.

Scheduled to run from Thursday to Sunday, the military exercises are expected to involve People’s Liberation Army air and naval forces, which will surround Taiwan on five sides and encroach into areas that Taiwan says are part of its territorial waters. These exercises will also reportedly mark the first time that China will send both of its aircraft carriers for drills in the Taiwan Strait, according to the Financial Times.

Taiwan’s defense ministry has accused China of using the military exercises to launch an air and sea blockade of the island nation. The ministry also tweeted on Wednesday that 27 Chinese military aircraft had flown through airspace surrounding Taiwan.

“PRC [People’s Republic of China] announcing air-naval live-fire drills around Taiwan is self-evidently apparent that they seek a cross-strait resolution by force instead of peaceful means,” Taiwan’s defense ministry tweeted on Tuesday. “Activities around our territory are closely monitored by #ROCMND [Republic of China Ministry of National Defense] and, will meet our appropriate responses when needed.”

China has long considered Taiwan a renegade province. Retired Adm. Phil Davidson, the former head of U.S. Indo-Pacific Command, has warned that the People’s Liberation Army could invade Taiwan by 2027.

China’s moves come roughly five months after Russia invaded Ukraine after a lengthy military buildup that included sending troops and equipment to Belarus for what Moscow claimed were joint training exercises. Experts told Task & Purpose that they do not see the same types of indications that the People’s Liberation Army exercises are a prelude to an invasion of Taiwan.

The People’s Liberation Army has not seen extensive combat since China invaded Vietnam in early 1979, so it would need time to plan an operation against Taiwan and assemble an invasion force, said Steven Wills, a naval strategist with CNA, a federally funded research and development center.

“Given the magnitude of a potential invasion, it would seem likely that we would see more extensive preparation as we did with the Russian invasion of Ukraine,” said Wills, a retired Navy lieutenant commander.

Instead, China’s military exercises appear to be in response to Pelosi’s visit to China, which the Financial Times first reported about just two weeks ago. On July 19, the spokeswoman for China’s Foreign Ministry indicated that China would take some sort of action if Pelosi’s visit took place.

If China were getting ready to invade Taiwan, it would take a series of steps that the United States would notice, said M. Taylor Fravel, an expert on China and the director of the Security Studies Program at the Massachusetts Institute of Technology.

“We would likely see a mobilization order from several hundred thousand troops and movement of units/equipment not just within the Eastern Theater Command but also likely with support from others,” Fravel told Task & Purpose. “We would also see the efforts to mobilize civilian vessels, given the limits of China’s own [amphibious] units. In this era of real time surveillance, there would be satellite imagery akin to those in the run-up to the Russian invasion.”

To invade Taiwan, China would need to mobilize its fleet of civilian ferries, which are operated by state-owned companies, said retired Navy Capt. Thomas Shugart, a military innovation expert with the Center for a New American Security think tank in Washington, D.C.

Most of China’s civilian shipping is running normally right now, Shugart told Task & Purpose. While three ferries had been taken off their normal routes earlier this week, one or two of the ships now appear to be headed home.

China requires its commercial vessels to meet military standards, he said. Shugart estimated that these ships could transport between four and seven brigades of People’s Liberation Army troops and equipment across the Taiwan Strait per day. But it would take time to train Chinese civilian ferry crews for such an invasion.

While the People’s Liberation Army does not appear to be prepared to invade Taiwan, it is still possible that China wants to capture one of Taiwan’s offshore islands, such as Pratas Island in the South China Sea, Shugart said.

Another issue is just how close the People’s Liberation Army plans to get to Taiwan, said James Holmes, the J. C. Wylie Chair of Maritime Strategy at the U.S. Naval War College in Newport, Rhode Island.

The term “territorial waters” applies to territory within 12 nautical miles of a country’s shoreline, and it is the legal limit for sovereignty, Holmes told Task & Purpose. This term does not mean the same thing as other lines of demarcation that China might violate during its military exercises, such as an exclusive economic zone, contiguous zone, and air-defense identification zone.

Based on the map of the People’s Liberation Army’s upcoming exercises released by Chinese state-run media it does not look as though China intends to encroach on Taiwan’s territorial sea or airspace, Holmes said. Should China actually cross into Taiwan’s sovereign territory, things would get dangerous very quickly.

“Taipei will have to challenge any such attempt to encroach on its sovereignty, presumably by sending ships and planes through contested zones to defy Beijing. And then they would be in close proximity to Chinese assets, and then who knows what might happen,” Holmes said. “One thing we know is that China does not want to pull the trigger first, so there is that.”