The Navy is reviewing whether or not to even decide to recover the jet. 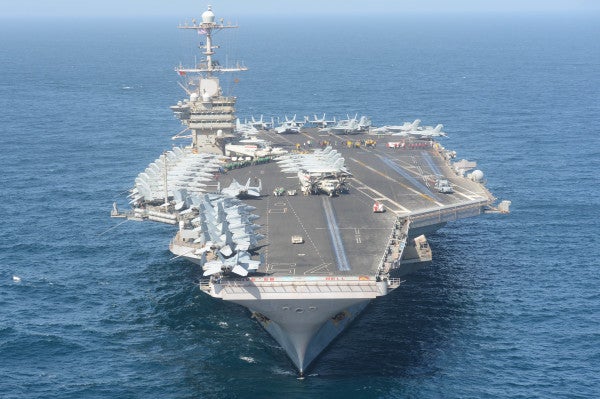 The Navy’s bad luck this year continues. So far it has had to deal with morale woes, recruiting difficulties and a string of command firings. Now Mother Nature scored a win over the service. The Navy reported that “unexpected” heavy weather blew an F/A-18 Super Hornet off of the aircraft carrier the USS Harry S. Truman this past week.

The Super Hornet was part of Carrier Air Wing 1 aboard the USS Harry S. Truman. The Nimitz-class carrier is itself part of the U.S. Sixth Fleet. At the time of the incident, the carrier was in the Mediterranean Sea, although the Sixth Fleet did not specify where exactly it was (a few days prior it was reported as being near the Ionian Sea). It’s also unclear if anyone was inside the fighter jet when the “unexpected” weather blew the plane overboard.

One sailor was injured during the incident, but is expected to recover. At the time, the carrier was being replenished by another, unspecified ship, and the operations were safely halted after the fighter jet was blown off of the ship’s deck. The Navy is currently investigating what happened.

Task & Purpose reached out to the Navy about the status of the windswept fighter jet, which is currently in the Mediterranean Sea, to see if the crew of the USS Harry S. Truman was able to fish the Super Hornet out of the water, or if it intends to at all. The Navy’s answer was unclear.

“A determination to recover the aircraft is being reviewed,” Cmdr. Richlyn Ivey, public affairs officer for U.S. Naval Forces Europe-Africa, told Task & Purpose. Ivey also did not say when a replacement fighter jet would be supplied, if the F/A-18 is not able to be recovered. The carrier and its fighter wing remain “fully mission capable,” according to the Sixth Fleet.

The wind incident is the latest aviation-related disaster to hit the Navy this summer. In the last two months, there were five military aviation mishaps, including a fatal Navy F/A-18 crash in California that is still being investigated. Last month the Navy briefly halted all aviation operations in order to review safety protocols and prevent further crashes. These disasters have been on top of the Navy’s ongoing firing of commanding officers, command breakdowns that left ships destroyed by fire and overall morale issues.

The F/A-18 Super Hornet: Capable of impressive aerial feats, the plane of choice for secret assault missions in Top Gun: Maverick and also susceptible to the power of nature.