"There is no greater honor for a Marine to be called to save Americans...That is what my Marines did. They will always be my heroes." 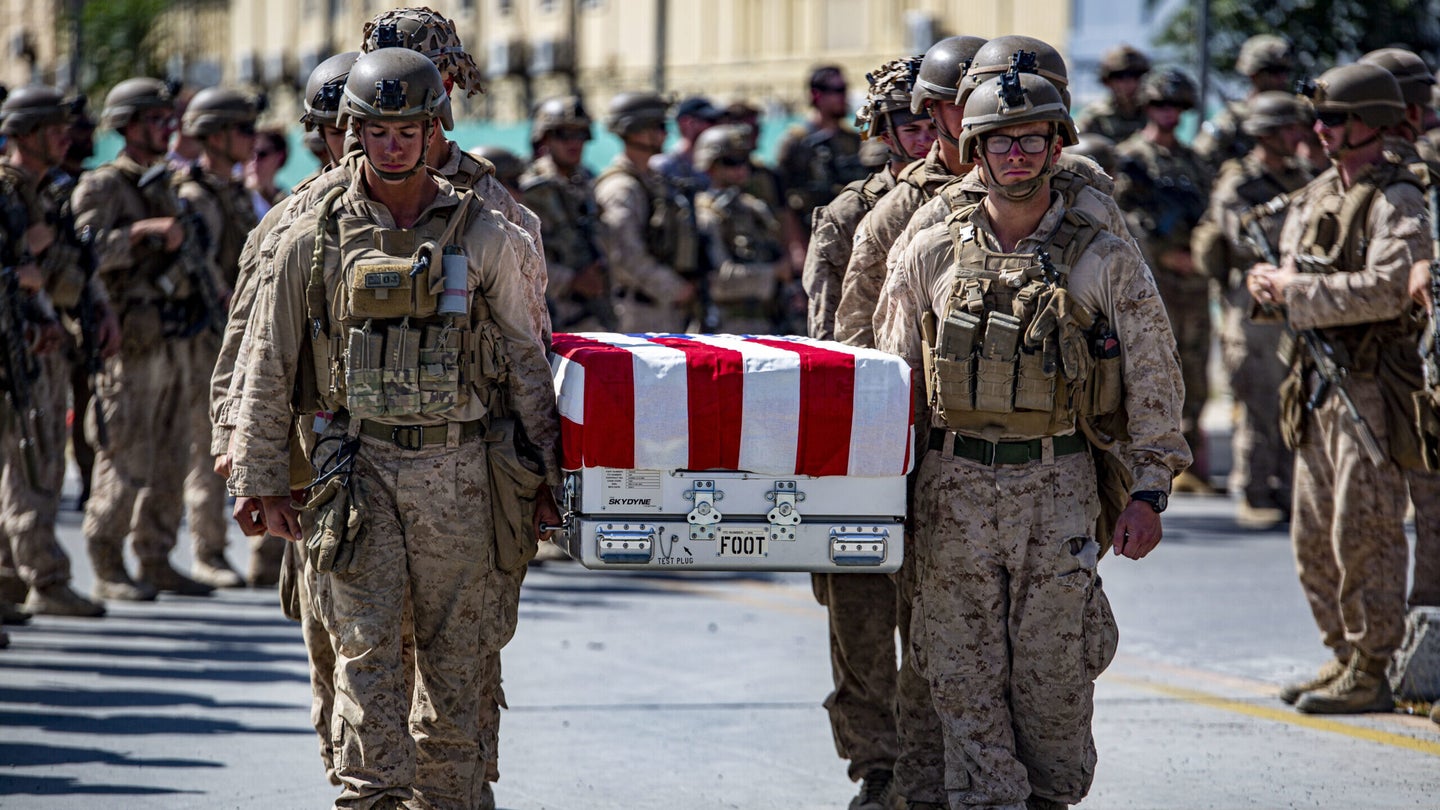 The American service members who died last week in a horrific suicide bombing in Kabul, Afghanistan, helped rescue more than 30,000 people from the Taliban, according to a U.S. Marine ground commander.

“Nine of my Marines and Sailors gave their lives so that others may live, and almost 20 other members of the company were wounded by their side,” Marine Capt. Geoff Ball, the commander of Ghost Company, 2nd Battalion, 1st Marine Regiment, wrote in a post on Facebook over the weekend. “There is no greater honor for a Marine to be called to save Americans. To be the last on deck as those who need our help are pulled to safety. To lay down our lives for others. That is what my Marines did. They will always be my heroes.”

Ball declined to comment further when reached by Task & Purpose. But the infantry officer’s public post on Facebook offered a first hand perspective of what happened before and after the attack on Aug. 26. That day at around 5:30 p.m., a terrorist from the Islamic State group weaved through a crowd of desperate Afghans attempting to flee the country and detonated a 25-pound explosive vest as Marines and sailors were pulling families out of a canal near the airport’s Abbey Gate entrance. “All those working to save Afghans and Americans were fully exposed to the blast,” Ball wrote.

At least 170 Afghans and 13 American military service members were killed in the devastating explosion. Hundreds more were wounded. It was what the military refers to as a “mass casualty event,” and Ball said he was proud of his Marines for getting the injured to the airport hospital so quickly.

“A mass casualty event is something we prepared and trained for,” the officer wrote of his Marines and the Navy medics they serve with, called corpsmen. “It is defined by having fewer resources than necessary to process and handle those wounded. In our case, we had a third of our entire force to care for in a split second. But in less than 20 minutes after the bomb detonated, we had our first wounded at the airport hospital and this included a ten minute drive time. Senior leaders at the operations center remarked they had never seen a MASSCAS response move so quickly. The entire V21 team worked incredibly smoothly and efficiently during this moment and we lived up to our name, The Professionals. We held security, we moved our wounded, and due to our training, likely saved more than we should have.”

He added: “If Ghost Company is anything- it is a family. It is resilient and it is cohesive. In less than 24 hours after we returned to our billeting area after the attack, the company was back on the line and watching over evacuees. As my First Sergeant and I walked the lines that night, we saw the airport flag at half mast and we raised it back up. There is no breaking this company.”

Ball and his infantry company had recently finished training in Jordan with the British Army’s 2nd Battalion, Parachute Regiment before both units were sent on a mission to help evacuate Americans and Afghan allies from Afghanistan after the western-backed government fell to the Taliban on August 15. Soldiers from the 82nd Airborne Division and Marines from the 24th Marine Expeditionary Unit were also sent to the Hamid Karzai International Airport to provide security and eventually process evacuees through North Gate, South Gate, East Gate, West Gate, and Abbey Gate. That task was incredibly difficult, as each day, a “sea of humanity” endured Taliban beatings, dehydration, and apocalyptic conditions just for a chance at making it safely behind the airport walls.

“The Marines of Ghost and the rest of the V21 family were magnificent,” Ball wrote. “Not only in that moment of horror, but throughout an entire week of the most indescribable tragedy one could ever witness. Our combined efforts kept the Abbey Gate open when many others closed – only pausing when the Dept of State couldn’t process evacuees fast enough. As a result, V21 and the British Parachute Regiment processed over 30,000 people through the Abbey Gate.

Marines and soldiers at Abbey and other gates witnessed far more horrors on the ground than what many saw in photos and videos that would emerge later. Days after Afghans were filmed clinging to the sides of U.S. military aircraft and falling to their death, the airport perimeter was secured by U.S. troops who could look beyond the walls and see Taliban militants blocking the path of men, women, and children and sometimes firing over the crowd with AK-47 fire.

And yet American troops had to work with the Taliban to control the massive crowds, which surged day after day. Marines were often so close to Taliban militants the U.S. military had been warring with for nearly two decades that they could practically touch each other. Some troops picked out children and others from the crowd and brought them over the concertina wire. But most people who were rescued from the Taliban regime likely walked through a gate operated and guarded by American and British service members.

On Aug. 26, Ghost Company was “rushing to save as many people as possible” at Abbey Gate before the U.S. withdrawal deadline of Aug. 31, according to Ball. The situation was already incredibly dangerous and it only worsened as more people continued to mass near the airport. Top Pentagon officials evaluated intelligence warnings that suggested an “incredible amount of risk on the ground” and concluded that Abbey Gate should be closed, according to Politico. But it was “not closed on schedule,” as Lara Seligman reported, citing classified call notes quoting Navy Rear Adm. Peter Vasely: “British forces had accelerated their drawdown from the Baron Hotel just a few hundred yards away, their main hub for evacuating U.K. personnel, and the Americans had to keep the gate open to allow the U.K. evacuees into the airport.”

The attack occurred before U.K. evacuees had arrived, Politico reported.

“We were supposed to have stopped an hour earlier, but we decided to keep working for an additional hour in hopes of finding more passport holders or Green Cards,” Ball wrote. “Alongside many other members of 2/1, the Army, and British Paratroopers, the Marines and Sailors of Ghost, were pulling families out of the canal when a suicide bomber detonated his device from the other side of the water.”

These are the 13 American military service members killed in the attack:

In the Facebook post, Ball asked people to consider donating to Tragedy Assistance Program for Survivors, a nonprofit group that provides comfort and resources for “all those grieving the death of a military loved one,” according to its website.

“They will be providing care to us for a long time to come,” Ball wrote.

You can read Ball’s full note below: