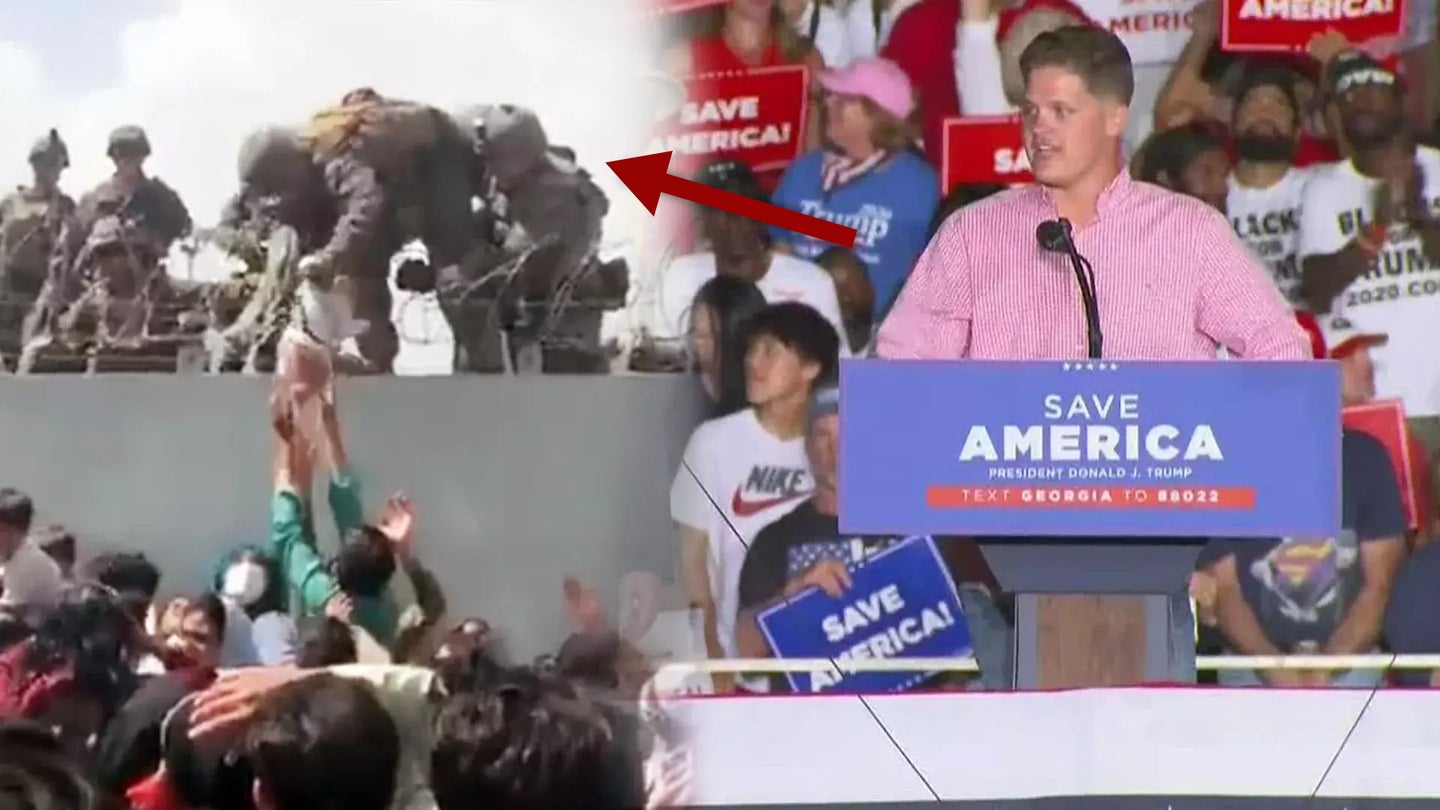 A screenshot via Twitter shows Lance Cpl. Hunter Clark as he helps another Marine lift an infant over the wall of the Hamid Karzai International Airport in Kabul, Afghanistan in August, alongside a screenshot of Clark at a September 2021 rally for former President Donald Trump. (Twitter/YouTube).
SHARE

Almost exactly a year after the Marine Corps cast doubt on whether Lance Cpl. Hunter Clark had helped save a baby at Kabul’s Hamid Karzai International Airport, a Corps official has confirmed to Task & Purpose that Clark helped get the baby to safety.

That moment was captured in an Aug. 19, 2021 video that went viral. The video shows six Marines standing on top of the airport’s wall as an Afghan man hands the infant to one Marine, who hoists the baby above the concertina wire.

On Sept. 25, Clark appeared onstage with former President Donald Trump at a political rally, where he told the cheering audience, “I am the guy that pulled the baby over the wall, and it’s definitely, probably, one of the greatest things I’ve ever done in my entire life.”

But shortly after Task & Purpose posted a story about Clark’s comments, Marine Corps officials cast doubt on Clark’s involvement in the rescue, and stated emphatically that Clark was not the Marine who took the baby from the Afghan man’s hands, and they could not confirm that he was one of the other Marines seen in the video.

Because Corps officials were unable to provide more information about Clark at the time, Task & Purpose wrote a correction to its Sept. 30 story saying that Clark was not the Marine holding the Afghan child in the viral video — in fact, Clark did help bring the baby over the concertina wire.

Now, a Marine Corps official has confirmed that Clark was one of the six Marines with the 24th Marine Expeditionary Unit who are seen in the video and that he did in fact help another Marine lift the Afghan child over the wall.

The Marine official confirmed to Task & Purpose that the information in the Instagram post is correct, and Clark can be seen holding on to Kapinus, who is the Marine taking the baby from an Afghan man’s arms. Video of the event clearly shows Kapinus handing the child to Clark, who takes the baby and helps get the child the rest of the way over the wall.

For the Marine Corps, this is quite a walk back from Sept. 30, when 24th Marine Expeditionary Unit spokesman Capt. Kelton Cochran told Task & Purpose that Clark “cannot be confirmed to be one of the Marines pulling a baby over the wall in that particular instance.”

Cochran also said that Clark was not one of the Marines in the video whom Corps officials had been able to identify so far.

“We only have identified those two: The ones who were actively pulling the child over the fence,” Cochran said. “We have not confirmed whether or not he was one of the Marines in that particular instance that was pulling a baby over.”

This is not the first time that the Marine Corps has had to backtrack earlier statements about an iconic image. On Feb. 23, 1945, Associated Press photographer Joe Rosenthal captured the moment when Marines raised the American flag on Iwo Jima’s Mount Suribachi.

The picture quickly became one of the most famous images from World War II, but in 2016 the Marine Corps determined that one of the six flag raisers was Marine Pfc. Harold Schultz and not Navy corpsman John Bradley, whose son co-wrote the book “Flags of our Fathers” about the event.

Following his appearance at the Trump political rally, Clark was cleared of violating any Defense Department policies, which limit service members’ political activities.

“The II Marine Expeditionary Force Inspector General has concluded an investigation into the facts and circumstances surrounding Lance Cpl. Hunter Clark’s appearance at an event on Sept. 25 in Georgia,” Marine Corps spokesman Maj. James Stenger told Task & Purpose on Nov. 4. “The investigation determined LCpl Clark’s actions were not in violation of prohibited political activities directives and therefore no disciplinary action shall be taken in this instance.”

As a result of the bravery shown by Clark and the roughly 6,000 other U.S. service members who conducted the evacuation from Kabul in August 2021, more than 124,000 people were able to escape from the Taliban.