“Our people are doing everything to make sure the land burns under the feet of the occupiers." 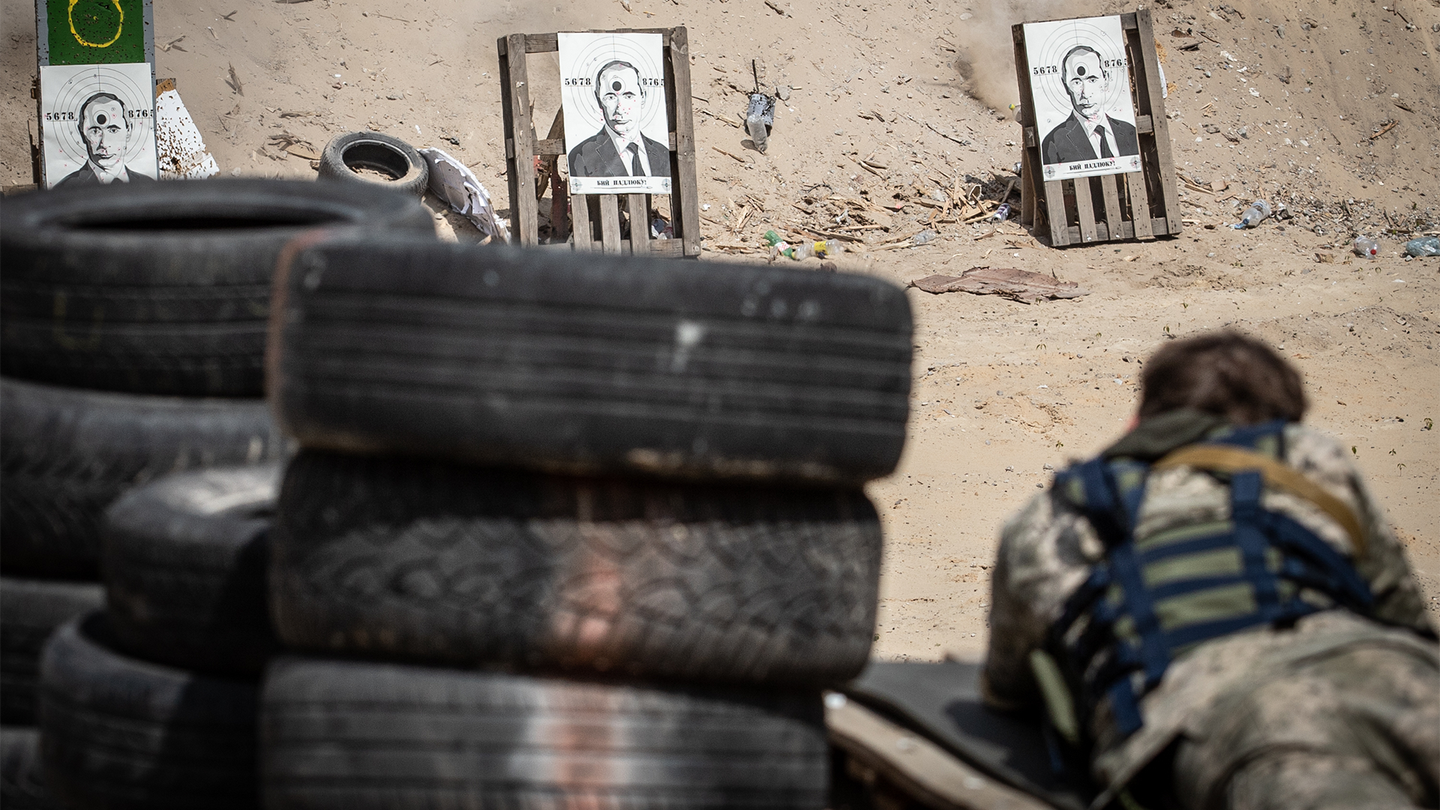 Ukrainian soldier practices shooting in a portrait of Vladimir Putin as a shooting target during a field military training on May 20, 2022 in Kyiv, Ukraine. (Photo by Oleksii Samsonov/Global Images Ukraine via Getty Images).
SHARE

Resistance has long been a necessity for the people of Ukraine. Since 2014, civilians in many of the urban centers across the nation have formed local partisan units. These units have focused on unconventional warfare and an adaptable defense of their region. Combined with keeping Russian forces tied up with local ambushes and surprise attacks on key figures, their efforts have been a relief for the regular Ukrainian forces fighting on the front.

These local resistance units are hard to identify. Naturally, they opt for secrecy and clandestine operations. Fighting an army of occupation requires such tactics, particularly as Russian regulars rotate out and Interior Ministry or Rosgvardia (Russian National Guard) units move in – neither of whom are known for their soft approach to assimilation.

A clear example of this is the occupied city of Kherson. The major shipping and economic center of over 280,000 residents was captured in the first days of March. After 40 percent of the population left the city, only those willing to capitulate or willing to fight remained. It took little time for the residents to begin their resistance. In the first days of occupation, residents took to the streets to protest the Russian presence. Almost immediately, the Russians began making lists of potential trouble-makers.

The city became a case study for Ukrainian resistance, along with the neighboring southern city of Melitopol. In late April, Ivan Fedorov, the mayor of occupied Melitopol, declared that, “According to our intelligence, there have been confirmed the destruction of 100 occupiers.” In Kherson, attacks began with the killing of pro-Russian public figures.

On March 20th, Pavlo Slobodchikov, a local businessman who worked with the Russian forces, was shot in his car along with his wife by a Ukrainian sabotage group. Pro-Russian blogger and activist Valery Kuleshov was shot in his car in the early hours of April 20th. It became quite clear to the people of Kherson that those who sided with the invaders were going to pay a price.

These local fighters have remained in the shadows, but their attacks have intensified as Ukrainian forces have advanced to within 20 km (12.4 miles) of the city. Fedorov stated that “our people are doing everything to make sure the land burns under the feet of the occupiers,” in reference to the resistance efforts ahead of a potential Ukrainian liberation. These efforts have amounted to approximately 100 Russian military or police personnel being killed by these shadow warriors. Poisoned food, grenade attacks, and ambushes on police patrols have all taken their toll.

More recently, the attacks have become more personal. Yevgeny Sobolev, a former Ukrainian jail warden, was attacked by an IED hung from a tree in Kherson in mid-June. While he and his driver survived the attack, it’s reported that he lost the use of his legs. Former anti-corruption agent Yevgeny Shevchenko commented on the incident, saying, “Yevgeny Sobolev, the head of the 90th correctional colony, who went over to the side of the occupiers, has just been liquidated in Kherson – I wonder who destroyed him?”

The partisans also ambushed Russian service members during a visit to a local cafe in Kherson. According to Ukrainian Southern Command’s Facebook, a trio of Russian occupation forces stopped in a waterfront cafe for lunch, during which they were ambushed by unknown assailants. These attackers are purported to be members of the resistance.

These resistance fighters, based on their tactics and equipment, are likely former members of the military and police. Having chosen to remain in the city under Russian occupation, they were forced to melt into the populace to avoid the impending purge by Russian authorities. And despite patrols of occupation forces uncovering Ukrainian weapons and ammunition caches, the partisans remain armed.

Their effectiveness is unclear, but it does in fact pull resources and attention away from conventional operations on the front line. In the case of Kherson, as Ukrainian forces draw near, Russians commanders have to step away to deal with these insurgent attacks. They are forced to spend time, resources, and manpower on these partisan activities while also conducting warfighting missions.

Politically, these resistance movements have significantly shaken the efforts of Russian-backed local leadership to stage a referendum. Efforts to incorporate the region into Russia or form an independent state could be derailed if these asymmetric forces continue to wound or kill members of the occupation. Additionally, it reduces the legitimacy of any puppet government put in place if there are routine attacks against its establishment.

However, the organization of the resistance groups is hard to discern. Kherson’s Russian-backed authorities seem to have done an effective job of suppressing any outreach or online networking of these groups.

However, the so-called Berdyansk Partisan Army has been more outspoken, particularly on Telegram. “Russian occupiers and their collaborators, do you think they have established control over Berdyansk? You still don’t know which mousetrap you got into,” the group posted on the popular encrypted social media channel. They continued with bold claims of their strength by saying “we, the Berdyansk Partisan Army, are already building up our forces and are ready to come out of the shadows.”

While these groups have struck at the rear echelons of the Russian military offensive, their combat effectiveness is difficult to gauge. While resources and manpower must be rerouted to handle their attacks, it is unlikely to make massive waves on the frontlines. However, should Ukrainian forces make enough headway in the south so as to threaten the city of Kherson, the resistance may be able to create an opening for them.

As partisan attacks will likely continue, Russian efforts to absorb and stabilize Ukrainian territory will be exceptionally difficult. The Russians will have to fight a two-front war, split between internal and external threats. This split – if properly exploited – could cripple the Russian occupying forces from within.

Mike Godwin is a freelance journalist who focuses on defense and security matters in Eastern Europe and the Caucasus, as well as NATO. He is a combat veteran of the United States Army and currently lives in Tbilisi, Georgia where he runs his own journalism and OSINT brand, MikeReports.