The 'Old Corps' refuses to fade away. 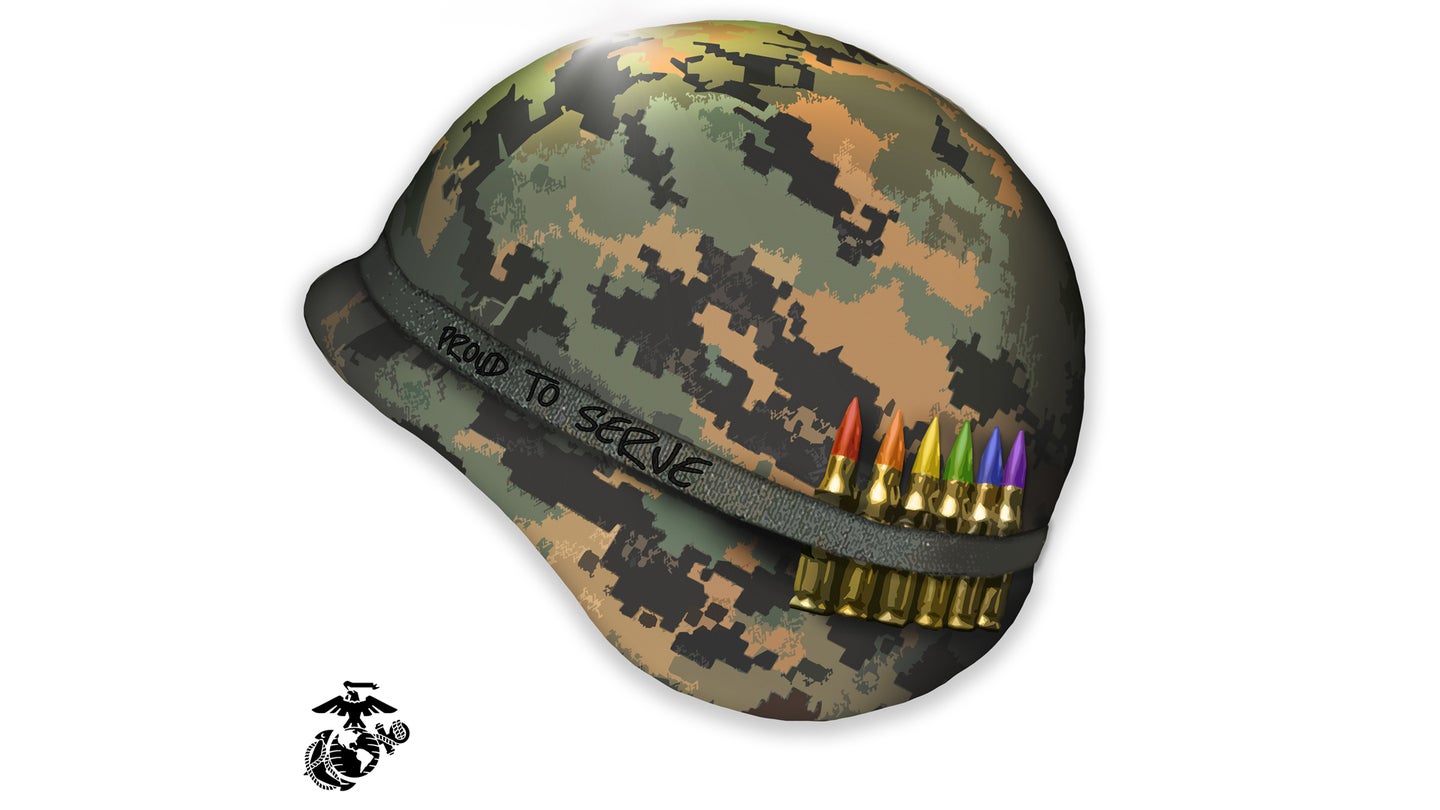 A social media post from the Marine Corps celebrating Pride Month has sparked an angry counterreaction on social media, revealing yet again how hostility to gay, lesbian, and transgender people serving in the military continues to linger more than a decade after the repeal of “Don’t Ask, Don’t Tell”

In an homage to “Full Metal Jacket,” the post shows a Marine helmet with the words “Proud To Serve” written on it along with rounds bearing rainbow-colored tips in honor of gay, lesbian, and transgender people who have honorably served their country, and, perhaps, the crayons that Jarheads are so fond of snacking on.

But since social media is largely a forum for the airing of grievances, it’s not surprising that some folks were triggered by the Marine Corps saying something about the LGBT community, despite the fact that gay and lesbian troops have been able to serve openly since 2010.

The Defense Department does not track service members by their sexual orientation or gender identity, so there are no official statistics about how many LGBTQ troops are currently in the military. However, a 2010 study by The Williams Institute at the University of California, Los Angeles Law School estimated that more than 70,000 gay, lesbian, and bisexual service members were serving in the military as of 2008. Additionally, a 2003 study from the Urban Institute estimated that at least 1 million veterans were gay or lesbian and that number is doubtlessly much higher now, said Lindsay Church, executive director and co-founder of the advocacy group Minority Vets.

“The commandant should be fired for allowing this to happen in our beloved Corps,” one person wrote on Facebook. “The WOKE politicians are weakening our military.”

The post comes as several states where service members are assigned have passed laws to curtail the rights of gays and lesbians and deny medical care to transgender children.

Another person wrote on Twitter that his grandfather served in the Marine Corps during World War II, adding, “I’m glad he didn’t have to be around to see it capitulate to Marxists.”

However, comments like these are simply a variation on a theme that has been around for years, going back to “Just the Tip of the Spear” and “Marines United.”  Such attitudes are typically described as “Old Corps,” and they are based on the notion that the reason the Marines have won wars in the past is they rooted out weakness by treating everyone like shit, so that only the strong remained.

The Marine Corps communication directorate did not provide a comment for this story, preferring to let the Pride Month post speak for itself.

While pervasive, the “Old Corps” myth is not universally embraced by veterans. As one person wrote on Reddit: “I’m a retiree. I can sit around and tell you how much better things were in the ‘old corps’, even if it’s bullshit and just the nostalgia talking.”

Other people on Reddit wrote that they did not care if their fellow Marines were gay, just as long as they were able to do their jobs, and suggested the people who were offended by the Pride Month post were likely part of an older generation that did not tolerate gays and lesibans.

“Love to see all these boomers lose their mind over it,” one Reddit commenter wrote. “I don’t ever want to hear some Old Corps = Hard Corps nonsense ever again.”

In fact, far from all the responses to the Marine Corps’ Pride Month social post were negative. Several people praised the Marine Corps for honoring gay, lesbian, and transgender Marines and sailors. One person wrote on Instagram that the best corpsman he ever served with was transgender and several other service members he deployed with later came out as gay.

“No ignorance here, I never cared and I was proud to support whatever beliefs my dudes had as long as they performed well within their corresponding infantry or corpsman occupations,” he wrote.

While the Marine Corps has not issued a statement in response to negative comments about the Pride Month post, the official Twitter account for the Corps’ East Coast recruit training depot at Parris Island, South Carolina, did push back on Wednesday against some of the negative comments.

Chief Warrant Officer Bobby Yarbrough, who manages Parris Island’s social media accounts, told Task & Purpose that his job is to educate people on current policies and why they exist.

“We do not attempt to identify people or groups in the comments section,” Yarbrough said. “As a service, we continue to reaffirm that every Marine has earned their place within our ranks and should be treated with due respect.”

He also said that nearly 80% of the comments to the Pride Month post were positive or supportive of LGBQT service members.

Maj. Philip Kulczewski, a spokesman for Parris Island, said the recruit depot’s communications team monitors and interacts with people on social media by restating the Marine Corps’ stance on policies.

The Parris Island social media team is particularly adept at bridging generational divides in order to make the point to naysayers, such as one person who tweeted, “You are no longer in the Marine Corps I was in!”

Parris Island replied: “I hate to break it to you…there were LGBTQ Marines in the ranks when you served.”

Correction: This article was updated after publication to note that the helmet said “Proud to Serve” rather than “Born to Serve.”