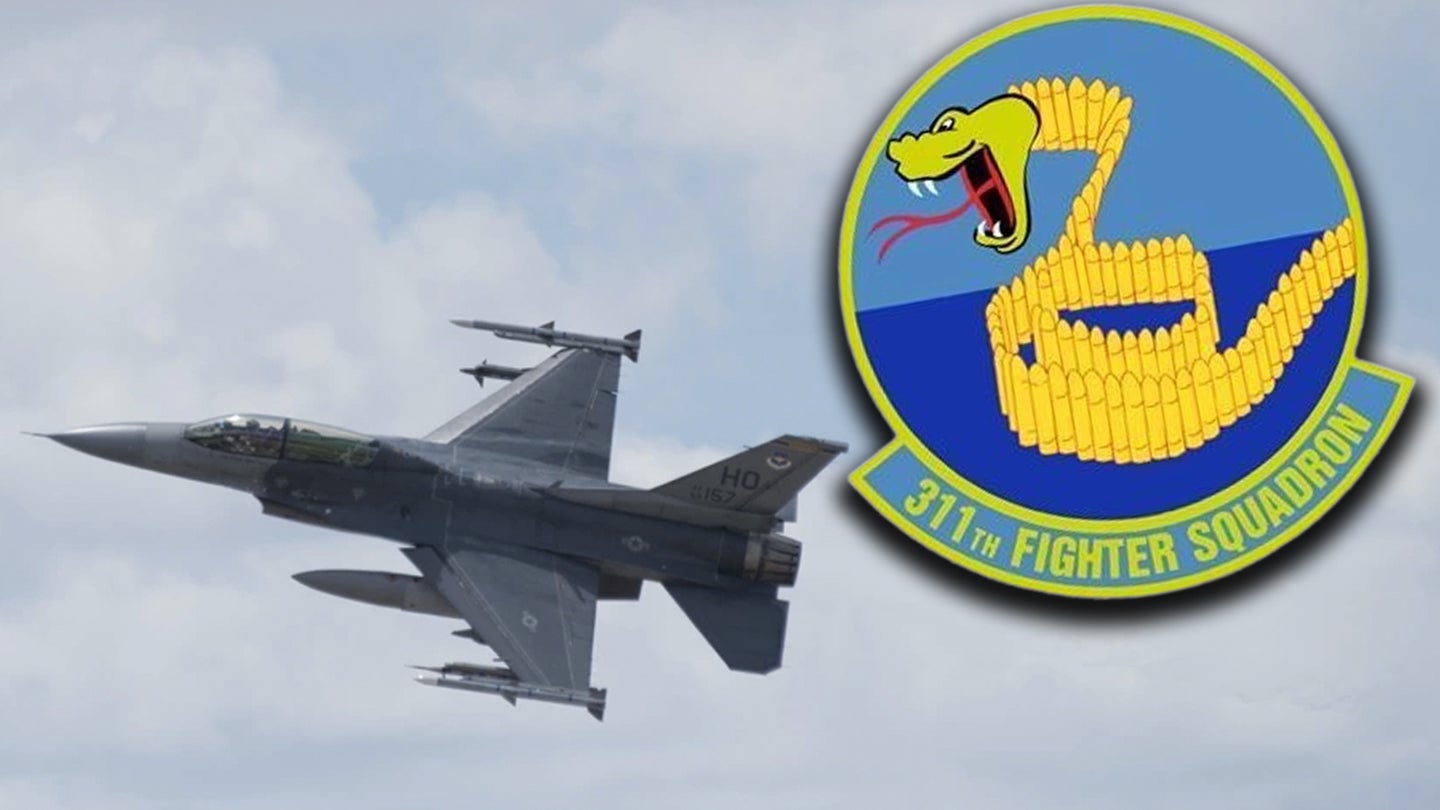 The 311th Fighter Squadron based at Holloman Air Force Base, New Mexico has one of the most unique emblems in the Air Force. (Task & Purpose photo illustration, photo by Airman 1st Class Adrian Salazar).
SHARE

One thing is certain: the U.S. Air Force has some pretty cool unit emblems. There’s the “Flying Tigers,” of the 23rd Fighter Group, the black dragon of the 3rd Special Operations Squadron, and the lightning bolt-riding samurai of the 14th Fighter Squadron.

Each of these emblems is laden with symbols that evoke the unit’s history and values, which is why one can’t help thinking “who the heck came up with that one” after looking at the emblem of the 311th Fighter Squadron based at Holloman Air Force Base, New Mexico.

The emblem depicts an ammunition belt coiled on the ground like a snake, with a green snake head bearing its fangs at one end. It resembles the snake on the yellow Gadsden flag, the one that says “Don’t tread on me,” except with more bullets.

While it is unclear who thought of this unique emblem, a unit history of the 311th reveals that it was first approved on Oct. 9, 1943, and it was redrawn on July 18, 1995. According to the unit history, the coiled snake and its fangs “represents the unit’s mission to strike swiftly in the nation’s defense, with both offensive and defensive weapons.” Meanwhile, the cartridge belt “reflects the integral part that all assigned personnel have in the mission.”

The emblem’s blue background refers to the sky, and the two shades of blue “reflects the unit’s ability to operate any time, in any weather,” according to the unit history. The yellow of the cartridge belt refers to the sun, “and the excellence required of Air Force personnel.”

The unit history doesn’t mention it, but it’s convenient that the emblem has a snake on it, since the 311th Fighter Squadron flies the F-16 fighter jet, commonly referred to as the Viper. More likely though, it’s a reference to the Sidewinder snake that lives in the American Southwest, moves in an S-curve pattern, and serves as the unit’s nickname. Of course, “Sidewinder” is also the name of an air-to-air missile, so the nickname is rich with meaning.

The 311th is a training squadron, and just last week it graduated its latest batch of seven Viper student pilots, who will now go on to operational flying units. The graduates are the most recent accomplishment for the squadron, which was first activated in 1942. Its pilots flew across the Pacific Theater and in the Korean War before being redesignated as a training squadron at Luke Air Force Base, Arizona in 1970. It has been inactivated and reactivated a few times since then before finally being reactivated in its current form at Holloman in 2014.

The 311th is just one unit among so many other Air Force squadrons that have been reactivated, inactivated, reformed and redesignated over the branch’s nearly 75-year history, each with their own unique emblem. Look up “air force squadron emblems” on Google images and you’ll get a feast of them. There is the deactivated 609th Special Operations Squadron, which featured the Roadrunner from Looney Tunes aiming some kind of firearm while standing on a bomb with an expression of complete serenity on his face. Then there is the deactivated 95th Fighter Squadron, whose emblem featured a skeleton sporting a top hat, monocle and bow tie. And we can’t leave out the emblem of the 152nd Fighter Squadron, which features Sylvester from Looney Tunes painting tiger stripes on his butt while riding a rocket into the sky.

Though some emblems are more serious than others, the tradition of silly unit emblems and mascots goes back at least as far as World War II, when airmen painted half-naked women and cartoon characters on the noses of their death-dealing war machines. Some folks dove deep into analyzing what nose art means on warbirds, particularly when the subjects are women. For example, anthropology professor Kent Wayland wrote in 2014 that when a WWII airplane was characterized as a woman by its nose art, it implied a relationship between the usually-male aviators and the aircraft.

“The more the airplane becomes an entity with which one has a relationship, the less salient its role as destroyer of bodies and buildings becomes,” Wayland wrote. “This reframing is clearest … in the case of the plane named after Paul Tibbets’ mother, the Enola Gay,” the plane which dropped the first atomic bomb used in warfare on Hiroshima, Japan.

“The story of the war itself in some ways [becomes] the story of the relationship between the aircrews and their ‘women,’” Wayland continued. “The foregrounding of this relationship helps overcome the potential stigma of war’s violence, which recedes into the background.”

Whether or not aviators today build a similar relationship with Sylvester the cat or a top hat-wearing skeleton is unclear, but the emblem images definitely evoke camaraderie and levity, which no doubt lightens the load of airborne warfare. I mean, who can look at a snake made out of bullets like the one on the 311th’s emblem without smiling a little?