"Our concern with that memo is making sure we’re taking care of our people." 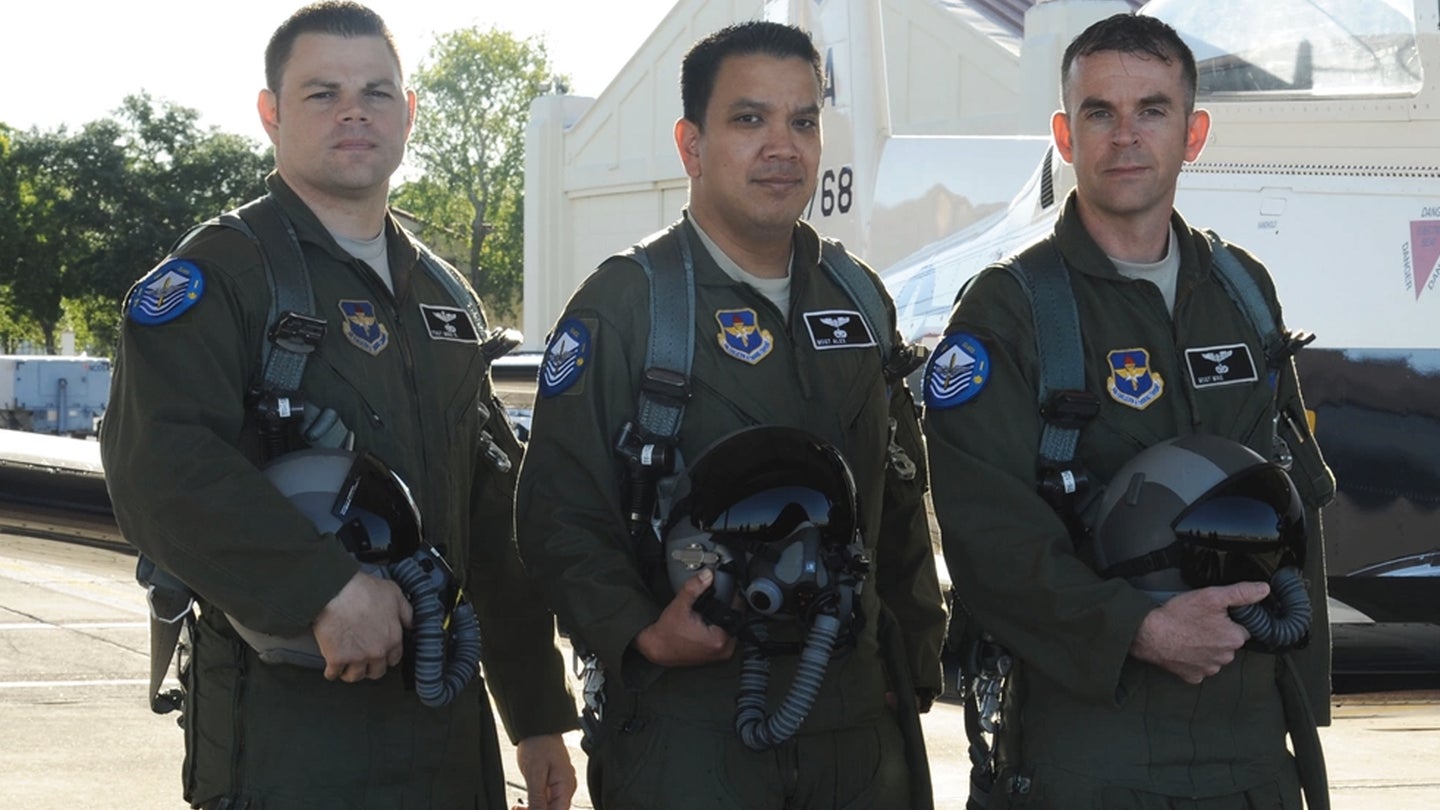 Tech. Sgt. Mike, Master Sgt. Alex and Master Sgt. Mike stand next to a T-6A Texan II parked on the west flight line at Joint Base San Antonio-Randolph, Texas, May 4, 2017. They completed undergraduate remotely piloted aircraft training May 5th here and the T-6A is one of the planes they trained in. They are the first Air Force enlisted airmen to train as pilots since World War II (Only first names were given because the Air Force limits disclosure of identifying information to first names for all RPA pilots and sensor operators throughout their careers. Name badges were blurred due to Air Force limits on disclosure of identifying information for RPA operators.) (U.S. Air Force illustration by Tech. Sgt. Ave I. Young).
SHARE

The airmen involved in the Air Force’s enlisted drone pilot program have a great shot at becoming officers and remaining pilots if they want to, the top officer and enlisted airman in the service said in a memo on Monday.

Gen. Charles “CQ” Brown Jr., the Air Force chief of staff, and Chief Master Sgt. of the Air Force JoAnne Bass said that if they meet the requirements, enlisted drone pilots “will be offered” a seat at officer training school if they desire to commission. If they get a commission, they could then continue to fly as officer drone pilots or try learning a new aircraft or a new non-aviation career.

On the flipside, if the enlisted drone pilots want to stay enlisted and serve in an aircrew, they “will be offered a career enlisted aviator field path,” or retrain in another field if they want to, the memo wrote.

Basically, the memo is meant to remind airmen who currently fly drones that they have plenty of options ahead of them, explained Master Sgt. Jarad Denton, Bass’ public affairs advisor.

“No matter what, they would come in with a leg up because of the experience they’re offering,” Denton said. “This memo codifies that … it expresses the tone we want to communicate, which is that, moving on from the enlisted RPA program, here are the options you have in front of you.”

RPA stands for remotely piloted aircraft, the military term for drones. In 2015, the Air Force announced that it was going to train enlisted airmen how to fly aircraft for the first time since World War II. Airmen in the program flew the RQ-4 Global Hawk, an enormous unarmed observation drone with a 130-foot wingspan. Part of the reason for the program was that the Air Force needed more pilots to fly the Global Hawks and thereby provide commanders on the ground in Iraq and Afghanistan with more intelligence.

“This action will make the most of the capabilities of our superb enlisted force in order to increase agility in addressing the ISR [intelligence, surveillance and reconnaissance] needs of the warfighter,” then-Air Force Secretary Deborah Lee James said at the time.

Any time enlisted airmen get to fly aircraft is a big deal. Though the Air Force assigns enlisted airmen to maintenance, security forces, logistics and other career fields, pilots are the ones who ultimately execute most of the airpower operations which constitute the branch’s reason for being. Why are only officers allowed to be pilots in the Air Force? There are three big reasons according to Katherine Kuzminski, senior fellow and Director of the Military, Veterans, and Society Program at the Center for a New American Security.

The first reason is legal authority. Like Navy officers sailing far from home, Air Force pilots must have the legal authority to make independent and consequential decisions while flying their aircraft deep over enemy territory or while carrying nuclear weapons, Kuzminski said, and officers have greater latitude to make those decisions than enlisted airmen.

The second reason is expense. It costs between $600,000 and $2,600,000 to train an Air Force pilot, and the service wants to make sure it gets a decent return on its investment, Kuzminski said. Officers tend to have longer terms of service than enlisted service members, so the Air Force can count on those pilots staying in longer.

The third reason is, well, that’s the way it’s always been.

“Historically there’s a class divide between officers and enlisted,” Kuzminksi said, and she’s right: the American military inherited the officer/enlisted divide from the British military, where officers were basically considered better people than their enlisted subordinates.

“The reality is that officers used to come almost exclusively from the nobility — who were thought to be intrinsically superior — and everyone else had to enlist,” Marine veteran William Treseder wrote for Task & Purpose in 2015, and some of that mindset still persists today.

“The underlying theme is that the Air Force is for pilots and pilots are officers,” Kuzminski said.

Kuzminski referred to a 2020 RAND report, which quoted an active-duty field grade officer saying that “Pilot wings were called a ‘universal management badge’ because you could put a pilot in charge of anything but you couldn’t put just anyone in charge of a pilot.”

With all that in mind, it’s big news whenever enlisted airmen have a chance to pilot aircraft. When the Air Force announced its enlisted drone pilot program in 2015, it kicked off media coverage of the initial announcement, the type of training the airmen faced, the graduation of those pilots, and how many airmen were selected in the next board. Not only that: more than 800 airmen applied for the positions, which shows widespread interest in enlisted piloting.

But while the enlisted drone pilot program provided a good stopgap and an interesting experiment, the Air Force does not seem to have intended for it to become a long-term option.

“The Air Force plans for the number of enlisted RPA pilots to grow to 100 within four years,” the service wrote in a 2017 press release. 100 pilots is a small number in terms of Air Force staffing (the branch churned out 511 MQ-9 Reaper drone pilots and sensor operators from one base in fiscal year 2019 alone), but there are two other signs that show the enlisted drone pilot program may be on its way out.

The first sign is the choice of aircraft. Though the Global Hawk and the Reaper play essential roles in intelligence-gathering over places like Iraq and Afghanistan, the Air Force argues that those slow platforms would not survive a fight with a more technologically-advanced military like China’s.

“The RQ-4 Block 30 Global Hawk was crucial to the [intelligence, surveillance, reconnaissance] requirements of yesterday and today. However, this platform cannot compete in a contested environment,” Gen. Brown told Congress in May.

The Air Force has been trying to get rid of the Global Hawk since 2012, but Congress is concerned the branch does not have a “comprehensive ISR modernization plan” to take its place, according to Defense News. Still, the Air Force keeps trying, as was evident in Brown and Bass’ memo on Monday.

“Should the RQ-4 program sunset, as requested of Congress, the Air Force is fully committed to outplacing current and future enlisted RPA pilots,” the leaders wrote.

At this point, the Air Force also does not seem to be planning to grow more enlisted drone pilots. The current number of enlisted RPA drivers is 75, an Air Force spokesperson explained, and the service does not have additional boards scheduled to possibly take on new ones at this time.

Despite this, it’s all a bit up in the air at the moment, and some of that uncertainty is reflected in the memo itself. While Brown and Bass write that the Global Hawk may sunset, they also refer to possible “future enlisted RPA pilots,” which is confusing since the only aircraft those pilots could fly is the Global Hawk. Master Sgt. Denton, Bass’ public affairs advisor, said part of the uncertainty derives from Congress’ ongoing disputes about next year’s defense funding bill, which also exacerbates the Air Force’s own process to shape its portfolio for a potential war against China.

With all that uncertainty, it’s not 100% clear that this is the end of the enlisted drone pilot program, but Kuzminski thought it was a safe bet.

“The gist seems to be, ‘hey enlisted drone pilots, you’re about to be out of a job, but we want you to stay in the Air Force, so check out these options,’” she said.

“It’s not necessarily a win or a loss [for enlisted airmen] but it shows how the Air Force is adapting to man its requirements,” she added. “They are going out of their way to say ‘here are two pathways you can take because we still want you.’ So it gives enlisted drone pilots an option.”

The two big options for pilots who want to keep flying are to either go to officer training school, which they need to pass in order to keep flying drones or to try their hand at flying manned aircraft; or to choose a job in the career enlisted aviator field, which includes the loadmasters, flight engineers, mission systems specialists and other jobs where you can fly but you won’t be piloting the plane.

To onlookers on social media, the options sounded like a pretty good deal.

“A damn near guaranteed commission to continue in the RPA world or other non-rated [air force specialty code] is a great deal,” wrote one Reddit user. “I’m jelly.”

That seems to be more or less the impression Brown and Bass were hoping for.

“Our concern with that memo is making sure we’re taking care of our people,” said Denton, who advised any affected airmen to meet with their local leadership about these options. “Here is one of several pathways they can go down.”