The path to #fixourcomputers isn’t to simply buy newer, beefier computers (though that will certainly help). 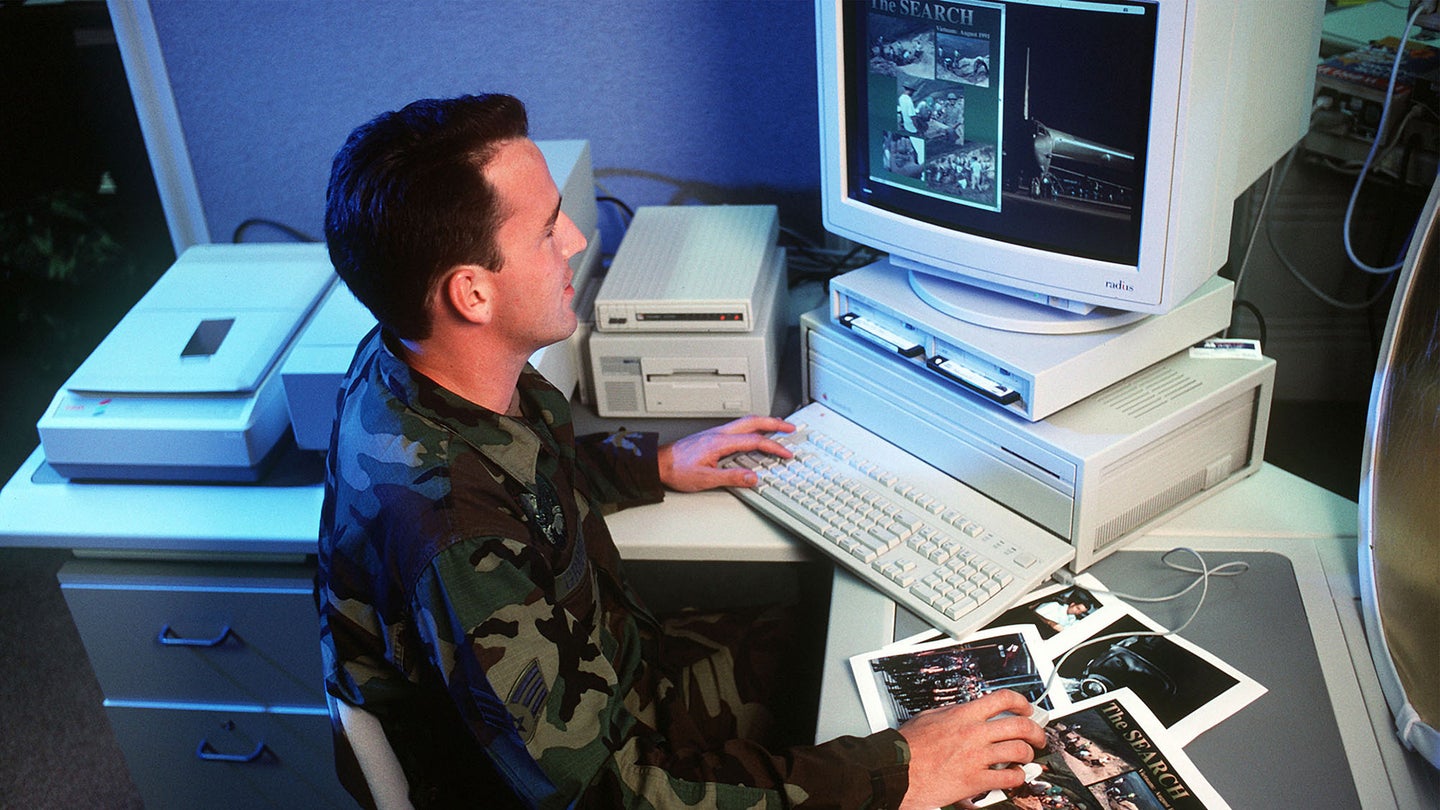 In this 1998 USAF file photo, an airman uses a computer that was probably as slow as the ones in use today. (Getty Images).
SHARE

Back in January, a frustrated Air Force employee made waves and caught senior military leaders’ attention when he penned a viral open letter calling for the Pentagon to repair the military’s aging computer infrastructure.

“Yesterday, I spent an hour waiting just to log on,” wrote Michael Kanaan, the Chief of Staff of the Air Force Scholar Masters fellow at Harvard Kennedy School, at the time. “Want innovation? You lost literally HUNDREDS OF THOUSANDS of employee hours last year because computers don’t work. Fix our computers.”

The term #fixourcomputers soon became viral internet shorthand for addressing computer and information technology issues across the Air Force—as well as the Defense Department and the government as a whole—and now, it appears to have stuck with the highest levels of service leadership. Earlier this month, Air Force Secretary Frank Kendall wrote a memo for the entire branch where he announced his team has made a “significant” start towards resolving the issue.

“I have also appreciated the hard work that has gone into roughly a dozen specific management initiatives, our efforts to identify opportunities to improve the management of the headquarters and the enterprise overall,” Kendall wrote in his August 1 memo, which recapped his first year as branch secretary. “As a result, we have been able to make a significant down payment to improve our IT and cyber posture – in other words, to fix our computers.”

That commitment from the top is important because decrepit or malfunctioning computers are not just inconvenient – they could also undermine national security. One airman who works in cybersecurity said it’s “literally impossible to do our jobs at times.”

“Menial tasks take exponentially longer than needed due to a cornucopia of intensive security software running on hardware that’s always at least three years behind in specifications,” said the airman, who preferred to stay anonymous since he is still in the military. “Even when a ‘refresh’ happens it seems like a Band-Aid that was purchased 2-3 years ago and finally gets through bureaucratic hell to make it to the end user. It’s obsolete before we even get it.”

That’s a tough situation for cybersecurity operators, who work in a field that the Department of Defense has identified as a “huge concern” both for national security and for the public and private civilian sectors. The anonymous airman likened it to a special forces soldier deploying to battle with obsolete weapons and gear.

“The SF guy needs and uses his [gear] every day,” the airman said. “He needs the best of the best. In theory, those who need the best stuff have some better things.”

While some of that difference was due to Stone’s personal computer having a better processor than his Air Force one, some of it was because the Air Force computer was overloaded with a mess of different required software.

“Five minutes after startup, my personal computer had reached a comfortable idle state while the Air Force CPU was still thrashing with McAfee, Tanium, and a bunch of other stuff,” wrote Barron Stone, a technical product manager and Air Force reservist, on his LinkedIn page.

Stone acknowledged that the data gathered in his small study may not be statistically significant, but it still points out the fact that it’s not just the age of the computers that matter: it’s what’s on them.

“The path to #fixourcomputers isn’t to simply buy newer, beefier computers (though that will certainly help),” Stone wrote. “We’ve got to untangle the web of configuration scripts and software bloat dragging down our machines.”

Like Kanaan’s letter in January, Stone’s small study struck a chord with service members and made the rounds online, appearing on the unofficial Air Force subreddit, the popular Facebook page Air Force amn/nco/snco, and the widely-read Air Force newsletter, The Merge.

“What’s it like to have a computer that takes less than 10 minutes to log in and get running?” wrote one Reddit user. “Mine takes 20 on a good day.”

Stone emphasized that raging at the Pentagon may not fix the issue.

“We can also continue shouting at the DoD as if it’s a dastardly villain, twirling its long mustache whilst intentionally slowing down our computers and laughing, ‘muahahahaha!’” he wrote on LinkedIn. “I doubt that will fix any problems… but it is kinda fun.”

Air Force Secretary Frank Kendall does not have a mustache to twirl, but what did he mean by making a “down payment” to improve the situation? Laura McAndrews, a spokesperson for the Air Force, said investing in the branch’s IT and cyber capabilities was one of several operational imperatives and management initiatives meant to prepare the Air Force for “challenges from pacing threats” (that’s Pentagon-ese for China) that Kendall presented the service with shortly after entering office.

McAndrews said the IT investments would be aimed at improving organizational efficiency, specifically achieving “financial performance improvements.” It would also have the effect of making it easier for the Air Force and the Space Force to achieve the other initiatives, like developing an ambitious communications network for connecting service members downrange or keeping comms open in a contested environment. One of the IT efforts is called Project Phoenix, which McAndrews said “is an effort to leverage the user experience and warfighter connectivity data the Department of the Air Force already collects to drive faster improvements for the warfighters.”

Tyndall Air Force Base, Florida seems to have implemented a kind of Project Phoenix when it updated its communication infrastructure in 2021 with upgraded phones, enhanced Wi-Fi, stronger in-building wireless service, a base area network update and a wide area network redesign. The goal was to make the network faster and more reliable, according to a press release at the time.

“A key focus area for the transition to wartime posture effort is the elimination of technical debt, especially on Department of the Air Force networks,” McAndrews said. “Aging network infrastructure serves as not only a potential vulnerability but also as a pain point when its poor performance throttles users’ access to the data they need to complete their mission.”

“We’ve seen increasing support from senior leadership to accelerate refresh of endpoints and network equipment, which is the largest drive of user experience,” the spokesperson added.

The hope is that these investments will make it easier to provision and manage modern hardware, optimize and automatically patch that hardware “and allow warfighters to easily consume cloud-based software, all leading to a more productive user experience for warfighter effect,” she said.

It may take time for an average airman to experience these changes firsthand. As Barron Stone, the Air Force veteran, wrote on LinkedIn, fixing Air Force computers is a complicated issue that can’t be solved by simply buying new computers or yelling at the Pentagon.

Still, Secretary Kendall likely knew what he was referring to when he used the phrase “fix our computers” in his memo, and without Kanaan raising a fuss back in January, it may not have appeared there.

“Good post Barron Stone,” one Marine Corps veteran wrote on LinkedIn in response to Stone’s infographic. “Quantifying and visualizing the pain is the only way to facilitate change.”