"It’s like a fast-moving jet with a monkey at the controls while getting in a fight with Mike Tyson." 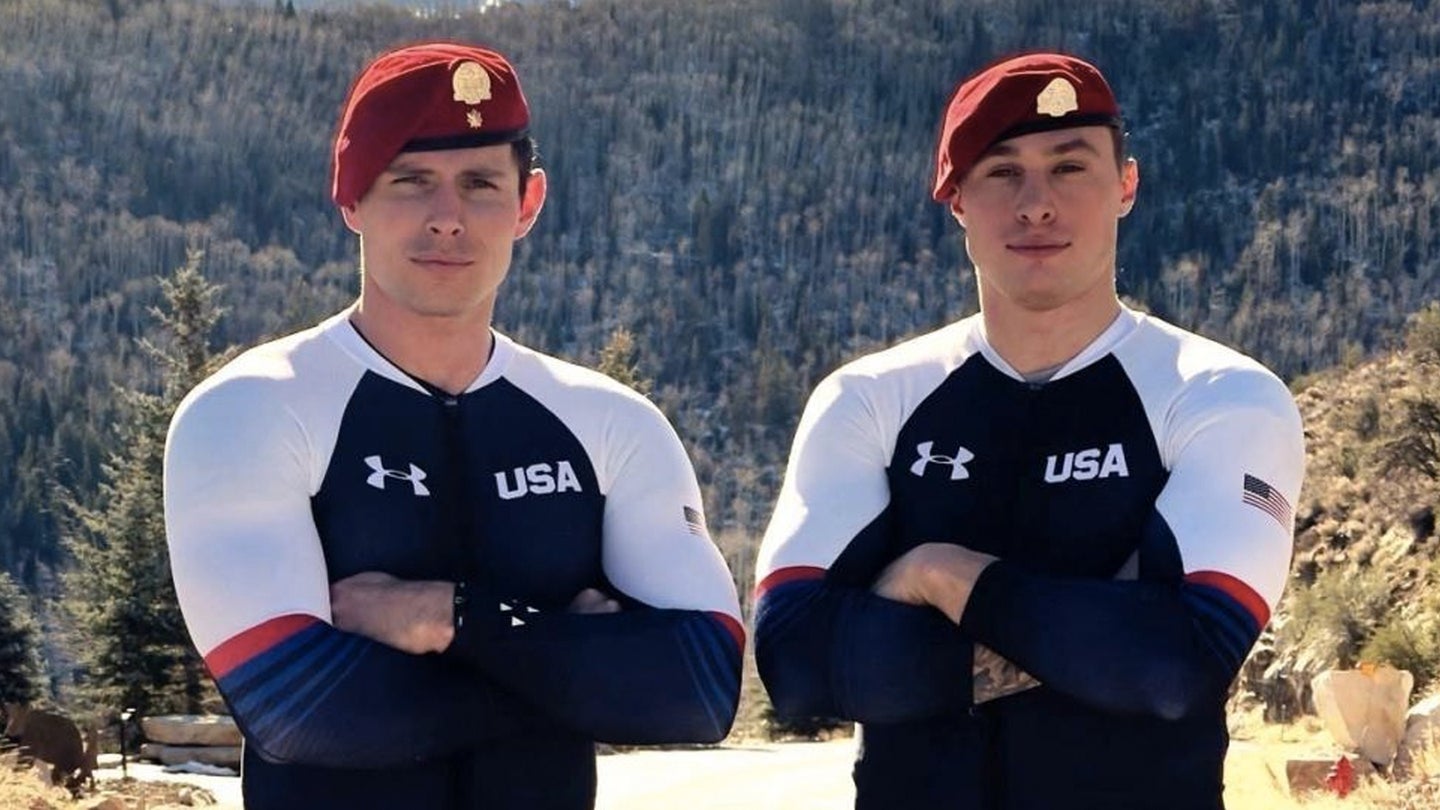 “First There” is the motto of the Air Force combat controller community, and two airmen hope to apply that same attitude to the finish line in a sport that is almost as dangerous as combat.

“To compete at this level requires the same focus and attention to detail as pre-mission prep and mission execution,” said Staff Sgt. Matt Beach, of the 22nd Special Tactics Squadron, in an Air Force news release. “[Bobsledding], believe it or not, has a lot of parallels with the ST community.”

Air Force Special Tactics is the umbrella term for the combat controllers (CCTs), pararescue jumpers (PJs), tactical air control parties (TACP), and special reconnaissance (SR) airmen. In particular, CCTs, PJs and SR airmen have some of the toughest training pipelines in the world, because when they graduate, they have to be ready to deploy with Army Special Forces, Navy SEALs and other elite units. PJs are combat search and rescue specialists who jump into enemy fire to recover isolated friendly ground troops and pilots, then give them medical care until they can evacuate. Combat controllers like Beach, meanwhile, are trained as professional air traffic controllers who can call in air support and manage air traffic above a chaotic battlefield.

“What CCTs do is they stitch everything together, and they determine whether everyone on the battlefield lives or dies,” retired Air Force special operations veteran Dan Schilling told Task & Purpose earlier this year.

Beach and his fellow airman, Special Tactics Officer Maj. Chris Walsh, hope to represent the U.S. at the 2022 Winter Olympics, and they might just make it. Earlier this week, the two airmen sported the red, white and blue speed suits of Team USA at the International Bobsled and Skeleton Federation North American Cup in Park City, Utah, where they finished sixth despite equipment issues. It’s a remarkable achievement considering Beach just started bobsledding last year. In fact, Walsh and Capt. Dakota Lynch, a U-28 observation plane pilot, were the ones who guided Beach into the high-speed sport.

“Having people like Maj. Walsh and Capt. Lynch to coach me through the process has been pivotal to getting me to where I am,” the airman said. “Very rarely does anyone come in and instantly master the push and load. It’s a process, but it’s a process I look forward to.”

By “push and load,” Beach is referring to the act of sprinting downhill in spiked shoes on ice while pushing a bathtub-sized sled and then jumping into the tiny cockpit. Those first 50 meters are the most vital part of the race, because it’s the bobsledders’ only chance to generate the force they need to accelerate down the rest of the track.

“You might think that if they save a tenth of a second at that start, how could that translate into much as they go down the track,” Dr. George Tuthill, a physicist, told the National Science Foundation in 2010. “But you have to remember that they’re accelerating all the time, and so if they have a small advantage at the start, they continue to maintain that small advantage most of the way down the track.”

Great bobsled teams make the push-and-load look easy, but that’s only because they’ve had a lot of practice doing it. Luckily, these airmen know how to get their reps in.

“The biggest thing from Special Tactics that translates to bobsledding is the mindset that you gain from going through all the ST training,” said Walsh. “There are days where it’s really tough and you have to do a lot of late-night work on the sled and then get up early the next morning to compete, so having that gritty mindset is very valuable.”

Of course, once started, bobsledders have to guide the speeding bullet-like sled down about three quarters of a mile of icy track. The sled can reach speeds over 90 miles per hour and generate up to five times the force of gravity for its occupants while going around the curves (called ‘walls’).

“It’s a metal and carbon-fiber bullet rifling down an ice track at speeds of 85-95 miles per hour,” Lynch said in 2018. “It’s like a fast-moving jet with a monkey at the controls while getting in a fight with Mike Tyson … it can be incredibly violent.”

In the old days, bobsled riders bobbed back and forth to speed up (hence the name ‘bobsled’), but today, riders keep their heads down to reduce drag while the pilot steers the sled along the walls, trying to avoid a crash.

“Crashing is one of those things that it’s not a matter of if, it’s just a matter of when,” bobsledder Elana Meyers Taylor told NPR in 2017. “There’s sharp things in the sled that’ll cut you up … And the biggest thing is, it is very, very loud. It is scraping, and it is piercing.”

Walsh has some experience driving heavy machines at high speed. A competitive car racer, earlier this year the airman became the first active-duty service member to compete in the TC America Series, where he placed third against some of the best car racers in North America. Walsh has been a full-time athlete since August, 2019, when he joined the Air Force’s World Class Athlete Program. But in addition to being an Olympic hopeful, Beach is still a full-time combat controller, so he’s got a lot on his plate.

“Competing at this level while maintaining all the currencies expected of us as operators is not an easy feat,” he said. “Scuba diving all day and jumping out of planes in the middle of the night is not the best recovery when having to race some of the best athletes in the nation, but I have found a way to make it work.”

A busy schedule won’t get in the way of their dreams, though. Walsh and Beach have another competition at Lake Placid, New York from Dec. 18 to 20. After that, hopefully the Olympics in Beijing, which is scheduled for Feb. 4 to 20, 2022.

“It’s great to be in the Olympic team picture at all,” said Walsh. “Competing with Team USA, USA Bobsled and the other athletes is a pretty big honor and to represent the Air Force on an international stage is awesome … regardless of that outcome, to me the whole journey of learning a new sport and being able to compete and push myself to the highest level has been very rewarding.”