Bad weather and a delicate terrain presented a series of challenges in recovering the downed tiltrotor craft. 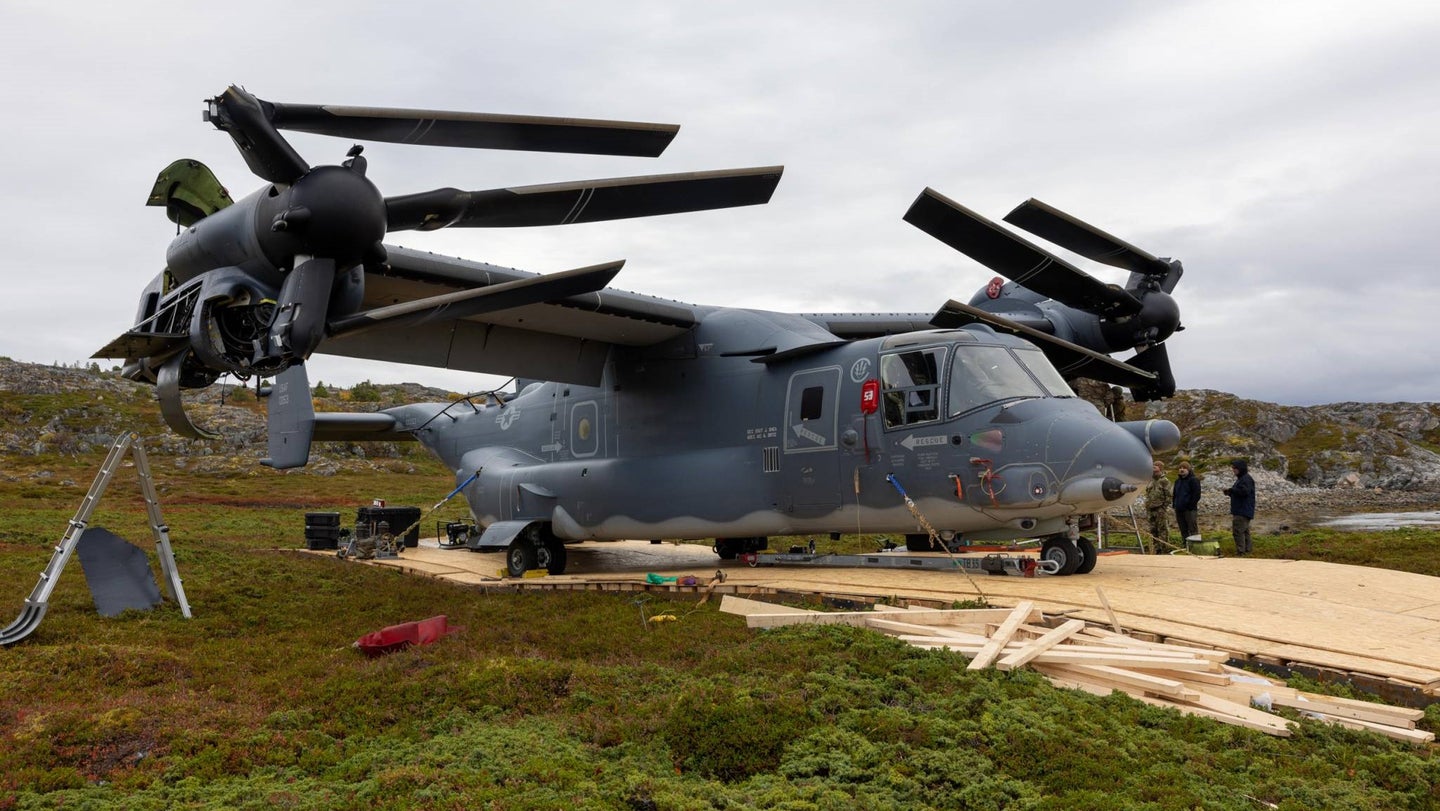 The Air Force Special Operations Command V-22 Osprey being moved along the ramp toward the sea. (Photo by Tiril Haslestad/Norwegian Armed Forces).
SHARE

For more than a month, U.S. Air Force Special Operations Command and the Norwegian military have been tackling an unusual and challenging operation: getting a stranded V-22 Osprey out of a nature reserve on the remote island in Norway where it made an emergency landing.

Now, forty-six days since it first arrived on the Stongodden nature reserve, crews have finally managed to remove the Osprey from the island and are moving it back to safe harbor.

The Norwegian Armed Forces announced late Tuesday that the Osprey had been successfully hoisted via crane off of Stongodden and onto a ship heading for port. On the American side, AFSOC confirmed the recovery and praised the Norwegian effort.

“We’re grateful for the partnership with our Norwegian partners as we’ve worked to recover the V-22 over the past 6 weeks,” Lt. Col Rebecca L. Heyse, director of public affairs for AFSOC, said in a statement to Task & Purpose.

“The successful recovery is a great example of the strength of the partnerships in the European theater that allow us to face whatever challenges come our way.”

The Osprey made an emergency landing on the northern Norwegian island of Senja on Aug. 12. The cause was a hard clutch engagement, where a sudden shift in power could throw the entire aircraft into a lurch.

Due to multiple incidents like this, AFSOC grounded its entire fleet in August to address the issue — and although it hasn’t been fully fixed, Ospreys were cleared for flights in early September after crews found a workaround as a stopgap.

Despite this, one Osprey remained stuck on the tip of Senja, an island in Troms and Finnmark, the northernmost county in Norway.

First, the Norwegian military and environmental officials had to come up with a plan to remove the Osprey, then get U.S. Air Force approval for it.

Due to the delicate nature of the Stongodden nature reserve, the operation required careful, cautious steps to remove the invasive species of aircraft from the island. Airlifting it out was ruled out, and the weight and size of the Osprey meant it couldn’t be disassembled.

Instead, the solution required a simple idea with a complicated execution: slide it to the sea to get it on a boat.

According to reports from the Norwegian Armed Forces , crews set up a small camp on the coast of Senja and started building a wooden ramp. The tiltroter craft was drained of its fuel, then put on the ramp. Crews then slowly moved it down the path to the sea.

The successful effort on Tuesday was “both exciting and challenging” according to Norweigian Senior Master Sergeant Odd Helge Wang, who led the work on the ground.

The biggest challenge to the operation wasn’t the physics of it, but inclement weather. Not just on Senja itself — which is in a storm-prone part of northern Norway — but also along the path the barge bearing construction supplies took, so far that efforts to remove the Osprey via a crane ship were delayed multiple times over the last two weeks.

Right now, the recovered aircraft is on its way to the nearest NATO port. It’s unclear what AFSOC intends to do with the Osprey after that.