However, a state attorney called for a federal investigation into whether the police officer had violated the soldier’s civil rights. 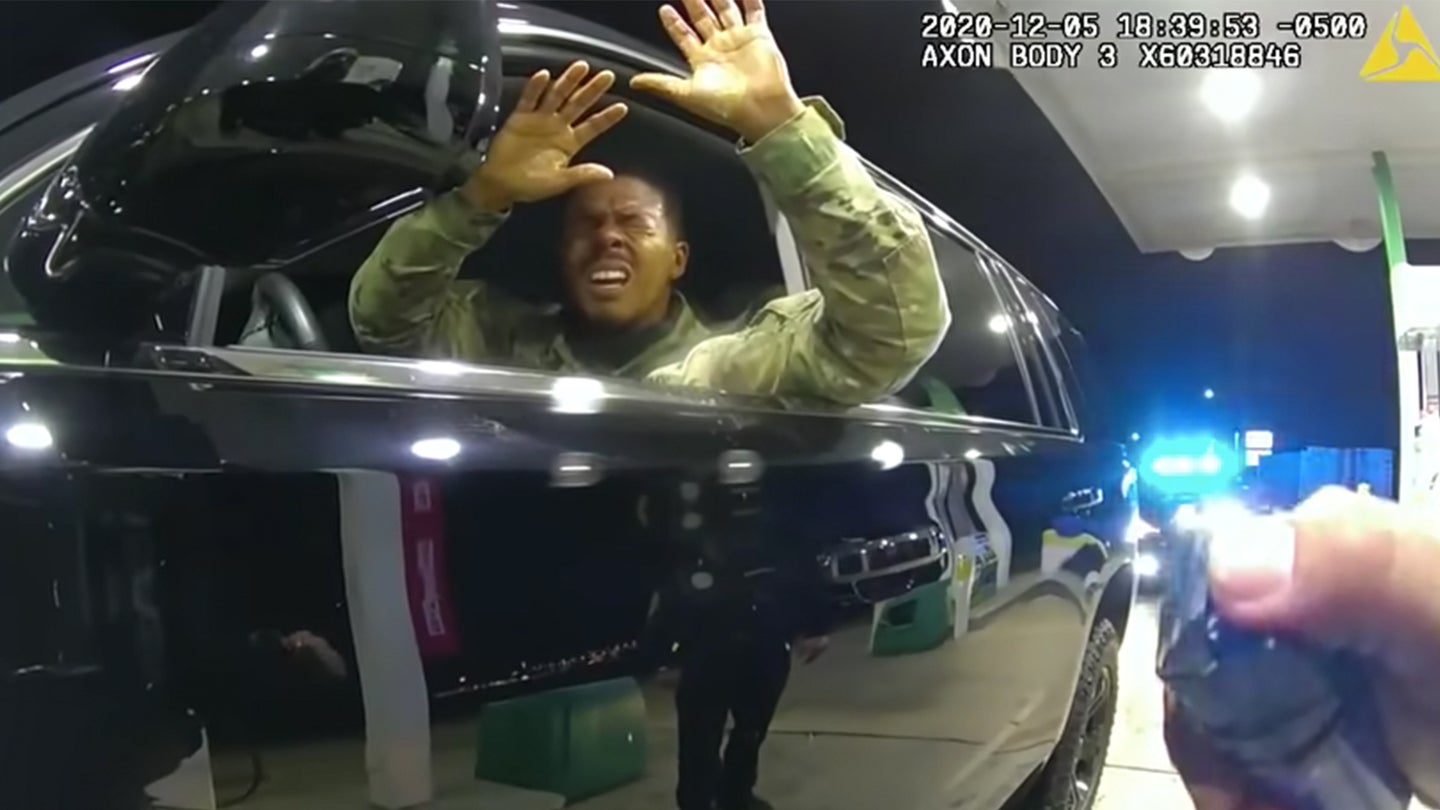 Bodycam footage from a traffic stop in Virginia in December 2020 appears to show a police officer named Joe Gutierrez pepper-spray U.S. Army 2nd Lieutenant Caron Nazario, who had his hands up at the time. (Screenshot via Windsor Police Department footage/YouTube/The Virginian-Pilot).
SHARE

A former Virginia police officer will not be charged with a crime after being seen on body camera footage apparently pepper-spraying a Black and Latino uniformed Army lieutenant and forcing him to the ground, which also led to a lawsuit. The officer could, however, face a federal investigation into whether he violated the soldier’s civil rights.

The incident took place on Dec. 5, 2020, when the police officer, Joe Gutierrez, and a colleague named Daniel Crocker pulled over 2nd Lt. Caron Nazario for a traffic stop.

Though Virginia special prosecutor Anton Bell found the video “very disturbing and frankly unsettling,” he said Gutierrez’s use of force to remove Nazario out of the vehicle he was driving “did not violate state law as he had given multiple commands” for the soldier to exit the vehicle, the prosecutor wrote in a July 29 letter closing his investigation of the matter.

Still, Bell contended that Gutierrez’s statements throughout the arrest “would lead a reasonable person to wonder whether underlying bias was at the root of how and why Nazario was treated in like manner.” The attorney said he also reached out to the U.S. Attorney’s Office for the Eastern District of Virginia to request an investigation into whether Gutierrez had violated Nazario’s civil rights.

Gutierrez was fired from the Windsor Police Department after the body camera footage went viral, wrote The Virginian-Pilot newspaper, which first reported the story. Crocker was allowed to keep his job.

The arrest occurred a little more than six months after George Floyd, an unarmed Black man, was murdered by police officer Derek Chauvin in Minneapolis, Minnesota, sparking nationwide protests against bias and excessive force used against Black Americans by police departments across the country. Nazario’s lawyers noted this trend in a complaint brought against Gutierrez and Crocker in April 2021.

The body cameras worn by the police officers, Nazario’s lawyers argued, “captured footage of behavior consistent with a disgusting nationwide trend of law enforcement officers, who, believing they can operate with complete impunity, engage in unprofessional, discourteous, racially-biased, dangerous, and sometimes deadly abuses of authority[.]”

Nazario, who was never charged with a crime, was on his way home from work at his duty station, which was not specified in the lawsuit, in his new black Chevrolet Tahoe SUV the night of his incident. He was driving down U.S. Route 460, the main road through the small town of Windsor, Virginia, when Crocker, a Windsor police officer, spotted the Tahoe from his police cruiser. Crocker said Nazario’s paper license tag was not properly affixed and was obscured behind the vehicle’s tinted rear window. Crocker said Nazario then disregarded his blue lights and sirens, as well as those of his colleague Gutierrez, who had joined the traffic stop in his own vehicle. Nazario continued driving below the speed limit for less than two minutes because “there was no good location in the immediate vicinity to stop safely,” the soldier’s lawyers wrote in the lawsuit. He eventually pulled into a BP parking lot because it was well-lit, the lawyers wrote.

The lawsuit argued that the officers could see Nazario’s “cardboard temporary plates” taped inside the rear window by the time they reached the SUV, but the situation escalated rapidly. Nazario had his window rolled down and his hands outstretched and empty. The two officers approached Nazario’s vehicle with their weapons drawn and pointed them at the soldier, according to the suit. The encounter at the gas station was caught on both of the officers’ body cameras, and recorded by Nazario, who after parking his car set his phone to record video of what was happening.

At one point in the bodycam footage, the officers attempt to force Nazario from his vehicle while he continues to keep his hands in the air. Gutierrez can be heard telling Crocker to step back, before taking out pepper spray and using it on Nazario, as the officers continue to yell at the soldier to get out of the car.

“I don’t even want to reach for my seatbelt, can you please?” Nazario said, clearly afraid that removing his hands from view might give the impression that he was reaching for something, and thus escalate the situation further.

“My hands are out, can you please — look, this is really messed up,” the soldier said after being pepper-sprayed.

During the encounter the officers shouted conflicting orders at the soldier, telling him to open the door and get out, while also telling him to keep his hands raised out of the window.

The lawsuit goes on to state that at one point during the encounter, Gutierrez said Nazario was “fixin’ to ride the lightning” — which the lawsuit claims was a “glib reference to execution by the electric chair.” However, Windsor Police Chief R.D. Riddle told reporters that the term was in reference to being tased, though he added that it was “inappropriate and created unnecessary fear.”

The suit argues that “Gutierrez intended this statement to mean, and this statement would be reasonably understood to mean, that Gutierrez was going to execute Lt. Nazario right there in the gas station parking lot, for some reason that the Defendants were unwilling and unable to articulate to Lt. Nazario.”

Nazario then got out of the vehicle and asked for the officers’ supervisor. According to the lawsuit, Gutierrez responded by knocking him to the ground with “knee-strikes,” before Nazario was handcuffed and questioned. The lawsuit adds that “Gutierrez and Crocker continued to strike Lt. Nazario” even after he was handcuffed and on the ground.

“Graduated from Virginia State University. He was commissioned out of their ROTC program. He’s an officer in the United States armed forces,” Jonathan Arthur, Nazario’s attorney told the Associated Press last year. “These guys decide to do this to him.”

Nazario’s federal lawsuit against the two officers had been scheduled to go to trial in May but was postponed and no new date has been set, The Virginian-Pilot also reported.

Nazario’s lawyers, Jonathan Arthur and Tom Roberts, applauded Anton Bell, the Virginia prosecutor, for requesting that the U.S. Attorney investigate whether Gutierrez violated Nazario’s civil rights. However, they said Bell went too far in stating that Gutierrez had not violated state law, especially since Bell called on the U.S. attorney to investigate a possible civil rights violation in the same letter. The lawyers noted that the statute of limitations for misdemeanor offenses that the police officers may have been suspected of committing expired “long ago under Virginia law,” so that even if Bell had determined “that there were sufficient facts to support a criminal prosecution of Gutierrez for misdemeanor assault, he would not have been able to prosecute [.]”

Still, the lawyers said it was odd that Bell seemed to focus on the traffic stop itself, rather than whether the force was excessive in view of the officers’ conflicting demands, or that Nazario was not fleeing and had his hands up.

Want to write for Task & Purpose? Click here. Or check out the latest stories on our homepage. a