The Army is teaching soldiers how to avoid dating assholes

“[U]nderstanding your values can benefit you morally, mentally, and emotionally." 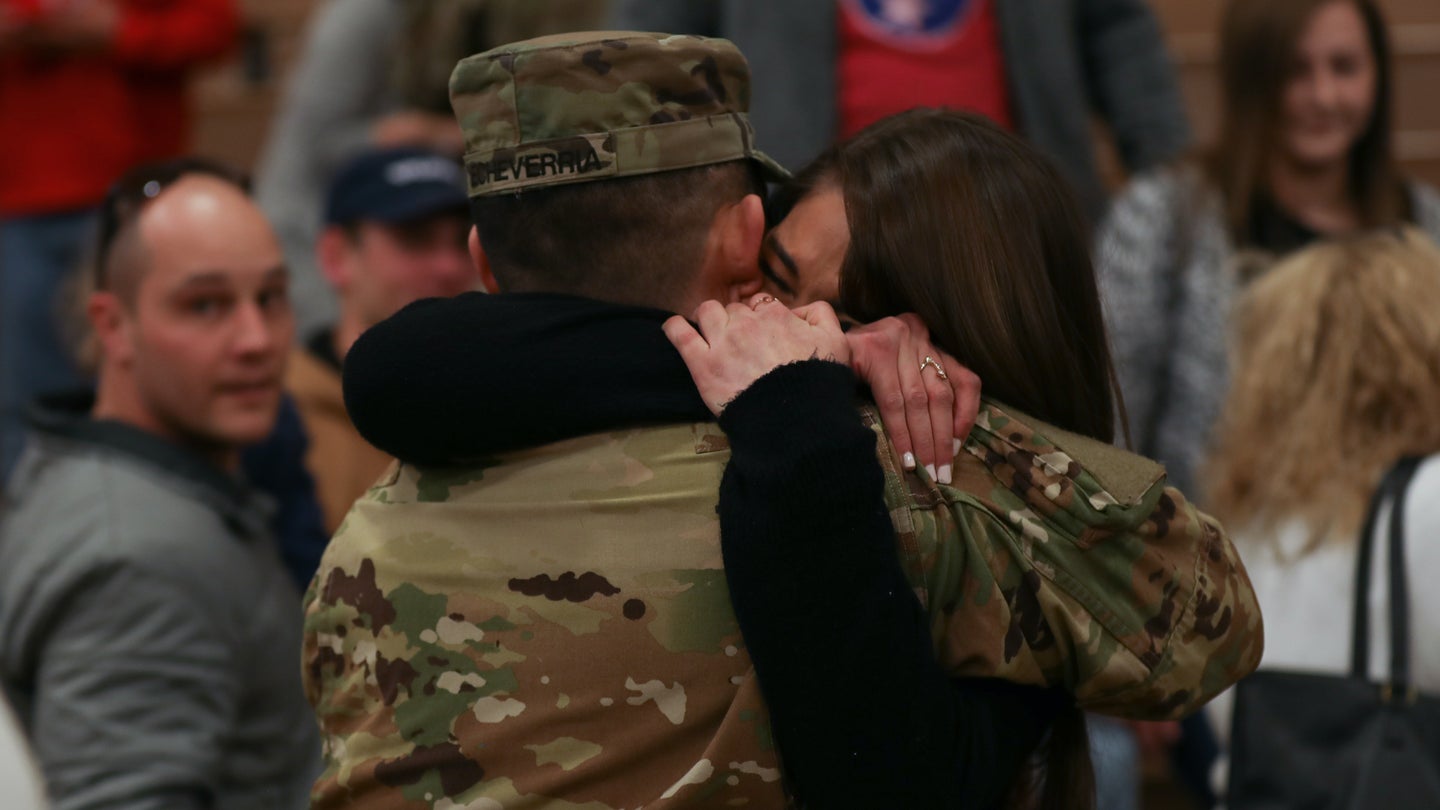 A soldier is reunited with his fiancé during a homecoming ceremony. (U.S. Army/Sgt. Daphney Black).
SHARE

A handful of soldiers were recently taught a valuable lesson that too many of us could have really used in our early twenties: How to not date assholes.

During a Strong Bonds retreat in Ohio on Friday, which a press release said was themed around “How to Avoid Falling in Love with a Jerk,” soldiers with the Army’s V Corps based out of Fort Knox, Kentucky learned about “relationship enhancement with a focus on the importance of picking a future partner.”

While the workshop is uncharacteristically blunt as far as names for military programs go, the lessons within it are worthwhile. Soldiers learned about what a healthy relationship does and does not look like, both in what they can expect from a partner, and what their partner should be able to expect from them. (An emotionally aware Army? I absolutely love to see it.)

Strong Bonds is a chaplain-led program intended to help build “individual resiliency” through “relationship education.” It’s not just for single soldiers, either. There are workshops for families, married couples, and programs specifically designed to help families and soldiers adjust to deployments, and coming home.

Soldiers who have been around for a few years have probably heard of this program, or taken the workshop themselves. Army press releases dating back to 2012 mention workshops that included the book How to Avoid Falling in Love with a Jerk by Dr. John Van Epp.

Lt. Col. Will Horton, a chaplain serving as the Army’s Office of the Chief of Chaplains religious support division chief, explained on Wednesday that the book, How to Avoid Falling in Love with a Jerk, is the basis for just one of many curriculums that the service uses from Van Epp, some of which are geared towards single soldiers, while others focus on married couples or families.

That curriculum is often based around the “attachment model.” The attachment model, Horton explained, looks at five categories: getting to know someone, trust, reliance, commitment, and sexual touch. The workshop for single soldiers focuses specifically on using that model to learn how to develop a relationship in a healthy, mature way.

“Too often people act on the belief that being in love entitles them to stop taking in and analyzing information about their partners,” Van Epp writes. “The assumption is that love itself will take care of all that is to come, including maintaining the relationship. Love is conceived as an either-or phenomenon. You either are in love, or you are not. And if the love switch is thrown on, the brain switch is turned off. You leap into an exciting pool of pure emotion and willfully choose to stay there until you are about to drown in bad feelings.”

During this most recent workshop at the V Corps retreat, soldiers talked about how “not to fall in love with a jerk or a jerk-ette,” according to Pfc. Javen Owens — an important lesson to be sure. But they also discussed what healthy relationships look like and what kind of work they can do on themselves to be a good partner.

They talked about “learning from your mistakes,” and knowing when someone is forcing you to change versus being “open to change yourself, and just knowing when it’s the right time to be in a relationship and not be afraid to get out of a relationship if it’s harmful for you or the other person involved.”

“Taking a step back and understanding your values can benefit you morally, mentally, and emotionally,” Spc. Nathaniel Mesa said in the V Corps press release.

Horton said on Wednesday he typically sees “very, very positive” feedback from soldiers on the workshop, who learn how to make better decisions for themselves and “identify characteristics that are healthy for them to be emotionally attached to.”

While a soldier’s dating life may not be a top tactical priority for the Army, learning “personal and relationship development” skills is a part of the Army’s People First initiative, the V Corps press release says. Chaplain (Capt.) Brad Wysomierski, the V Corps chaplain, said that the Army “wants to make sure we’re putting training and value back into developing healthy relationships.”

And Horton said on Wednesday that the People First initiative fits very nicely into the core goal of Army chaplains.

“We in the chaplain corps have always put people first,” Horton said. “And therefore it’s really very easy for us to support and encourage our soldiers and their value, and the strengthening of their person, their wholeness, their well-being. That’s important for us to continue to do that, and providing training like this helps us to actually make people first.”