How this Army infantryman became the ‘sergeant major of TikTok’

"You get on TikTok and look, there’s thousands and thousands of soldiers on there." 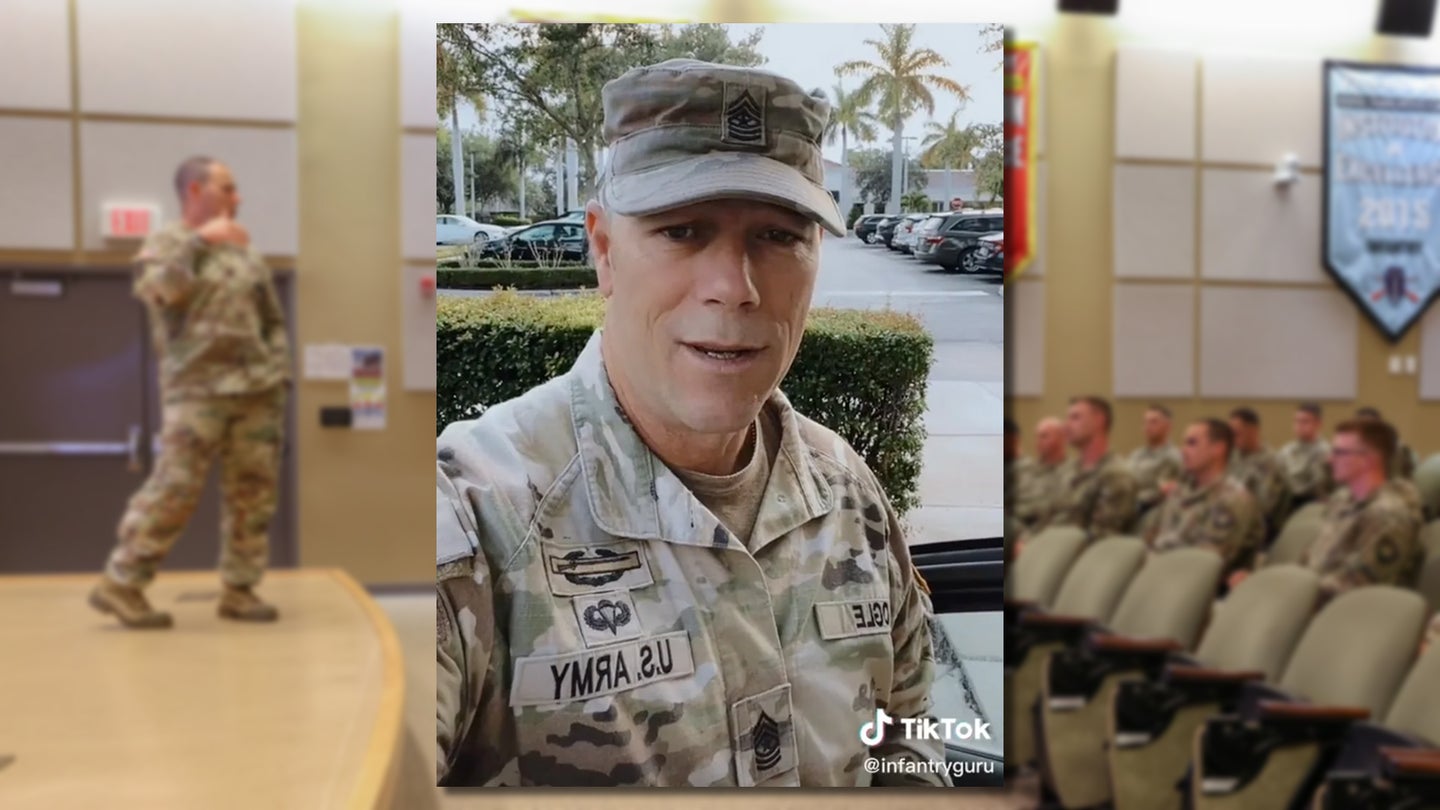 Army Sgt. Maj. Lawrence Ogle is an infantryman, through and through. He completed basic training just 10 days before he shipped off to Kuwait to take part in Desert Storm, and has served over 30 years in uniform on active duty and in the National Guard. In addition to his deployment to Kuwait, he’s also deployed to Iraq and Afghanistan. He currently serves as the senior enlisted advisor for the Florida Counterdrug Task Force in the Florida National Guard. He’s also TikTok famous.

“It’s very humbling, just the notoriety I guess, or the popularity. I mean I’ve been through the airport several times and people just walk up to me — ‘You’re @infantryguru from TikTok.’ And I’m like, wow,” Ogle told Task & Purpose this week.

The senior enlisted soldier and father of four has racked up more than 600,000 followers on TikTok, posting inspirational leadership videos and clips more focused on military humor. He was recently part of a group of social media influencers, which the Army brought to Washington, D.C., as part of the service’s 247th birthday celebration.

But none of that was in the plan when he first joined the social media platform, he said. In 2020, Ogle was just trying to keep an eye on his kids, who were home during the COVID-19 pandemic and spending a lot of their time “showing each other videos or sharing videos and laughing.”

“I had no idea what TikTok was,” he said, “and I asked them about it and they told me what it was. And I’ve always been very leery of social media because I know how dangerous it can be. So I said I’m gonna check this thing out.”

His first experience with TikTok was much like everyone else’s: finding it far too easy to lose track of time scrolling through a curated stream of content, going from one humorous or informative or inspiring video to the next. The platform is hugely popular, especially among young people — and that includes junior soldiers.

But the Chinese-made app hasn’t always been so accepted, particularly among the military. In 2019, the Pentagon encouraged all Defense Department employees to uninstall it from their phones. Lawmakers expressed their concerns over troops using the app, and eventually the services directed that their members were not allowed to use it on government property.

Ogle said he understood the concerns, but he also saw what was unavoidable: young soldiers were using TikTok, whether the Pentagon wanted them to or not.

“Even with the policy, I didn’t believe it was going to stop young soldiers,” Ogle said. They were using it on their personal phones and leaders couldn’t do much about it. So instead of fighting the reality that soldiers would find a way, Ogle said he wanted to ensure that when they were on the app, they’d see someone they could “look up to” and see “what right looks like.”

The Pentagon still doesn’t allow TikTok, which means the services don’t have the kind of presence they do on Twitter, Instagram, or Facebook. And that’s a problem: The young Americans that the Army wants to recruit, and a fair number of young soldiers currently serving, are on the platform.

Over the weekend in D.C., Ogle said Army leaders were discussing the service’s social media presence. A question came up of what people thought was the biggest social media platform, and when some answered Facebook, Ogle said he “immediately spoke up.”

“I said I do not believe Facebook is the biggest social media platform anymore,” he recalled. “I said, I know this is an ugly word and nobody wants to hear it, but I believe TikTok is … You get on TikTok and look, there’s thousands and thousands of soldiers on there. And there’s a lot of younger generation people that are the type we want to recruit.”

Indeed, the number of teenagers on Facebook has drastically decreased over the last 10 years, whereas TikTok was the most downloaded app around the world at the beginning of this year. And while the policy against TikTok stems from the Pentagon as a whole, not an individual service, Ogle said the Army is missing an opportunity by not embracing Tiktok for what it is.

Not to mention that the app has clearly worked out for him. Ogle said that when he first joined, he focused on doing encouraging videos about leadership, hoping to motivate the younger generation of soldiers he saw using the app. After a while, he started posting funnier videos. But ultimately, he just wanted to post relatable content that soldiers liked. He said he wanted to show them that yes, he’s a sergeant major, but “I’m also a human being, I’ve been through some of these things.”

He started showing more and more of his family because he saw other soldiers struggling with the balance between the military and their home life.

“I wanted to show them that they can do it,” Ogle said. “My wife and I were married a year before I joined the Army, and she has stuck with me for 33 years, through all the ups and downs and deployments and training cycles … I wanted to show that side, specifically to young soldiers that ‘hey, you could do it. It takes work, but you can do it.’”

Ogle recalled one moment in particular when it became clear just how big of an impact social media can have. One night, around two in the morning, he said he got a message from a young Marine who followed him on TikTok. He was very blunt, according to Ogle, who said he told him that he was sitting at home with a pistol and needed someone to talk to immediately.

“I sat up in bed and I told my wife, and she’s like, ‘What are you going to do?’ I’m like, I’m gonna give him my phone number and tell him to call me,” Ogle recalled. The Marine was just “at the end of his rope” and “didn’t know where to go,” Ogle said. The two stayed on the phone for hours. They even met up in-person several months later when they discovered Ogle was on a work trip close to where the Marine lived.

It was a huge moment for Ogle, one in which he realized just how important social media can be — but it’s not the kind of impact most military leaders think of when they think about social media. There has been no shortage of examples over the last few years alone of service members getting into trouble because of their social media posts. For the more senior ranking leaders in the military, who didn’t grow up with social media, it can seem to do more harm than good as those kinds of public incidents reflect on their formations.

Ogle, as you might expect, doesn’t see it that way. He finds it to be a critical tool in learning what young soldiers — and young Americans who could be soldiers one day — are concerned about or thinking when it comes to military service. Especially as leaders move up through the ranks, Ogle said that at a certain point as a senior leader, you lose the one-on-one time with your soldiers because you’re busy with other meetings and responsibilities.

TikTok, he said, is a “way to interact and really get to know your soldiers.”

But there’s still plenty of work to be done for the military to better understand social media and how its current, and prospective, members are using it. Over the weekend in D.C., for example, as a dozen influencers came to participate in Army birthday events, Ogle said they discussed the lack of training leaders get with social media. His impression was that the Army is looking “very hard at that” as something they should implement.

And ultimately, the difference between leaders who are scared of social media, and leaders who embrace it and learn to use it, could have a huge payoff.

“Social media is such a big thing today with today’s generation,” Ogle said. “And it’s such a powerful tool that if we teach them how to use it, and they learn how to use it? Man, what a great opportunity to recruit and to encourage and mentor and help each other, and help our young soldiers.”