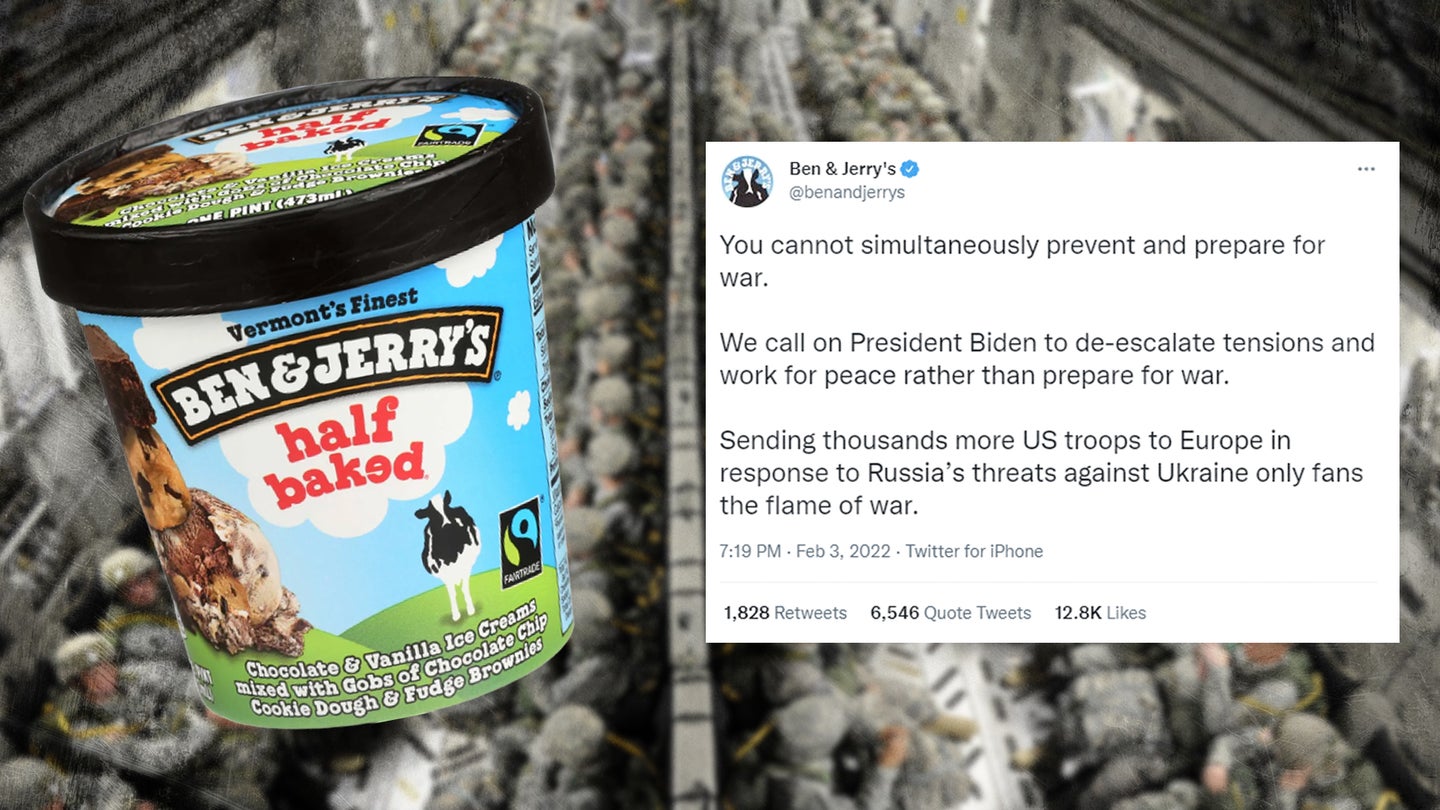 Over the weekend, the first contingents of soldiers from Fort Bragg, North Carolina began touching down in Europe, amid increasing tensions on the continent as Russia amasses more than 100,000 troops along its border with Ukraine. The U.S. deployment includes an infantry brigade combat team from the 82nd Airborne Division heading to Poland and a joint task force headquarters from the 18th Airborne Corps heading to Germany.

The deployment of American troops, which was announced last Wednesday, did not sit well with one Vermont-based ice cream manufacturer.

“We call on President Biden to de-escalate tensions and work for peace rather than prepare for war. Sending thousands more US troops to Europe in response to Russia’s threats against Ukraine only fans the flame of war.”

In the nearly eight years since Russia seized the region of Crimea, Ukraine has been fighting a simmering conflict in the disputed Donbas region along the Russian border. It has also aspired to seek out membership in NATO, the eastward expansion of which Russia has long considered a national security threat.

While publicly denying any intentions to invade, since late last year Russia has begun arraying military forces and equipment at various points along its border with Ukraine.

Currently, Russia is estimated to have about 70% of the combat power it would need for a full-scale invasion, and White House National Security Advisor Jake Sullivan said in a Sunday television appearance that Russian military action could come “any day now.”

The U.S. and other NATO countries have continued to pursue diplomacy as a means to resolve the tension in eastern Europe, even as the U.S. has continued its military assistance, also now known as “lethal aid” to Ukraine.

The rapid deployment is nothing new for the troops at Fort Bragg, in fact, it’s one of their primary missions. As detailed to Task & Purpose in January, the 82nd Airborne Division makes up the core of the Immediate Response Force, which is capable of deploying worldwide within a day.

Soldiers from Fort Bragg will be joined by a Stryker squadron currently stationed in Germany that is repositioning to Romania. The Pentagon has also announced that an additional 8,500 troops are on heightened alert for a possible deployment.

As for Ben & Jerry’s, the company has never been one to shy away from wearing its politics on its sleeve. As far back as 1998, the company’s founders have expressed skepticism over potential NATO expansion. In August 2020, the company also tweeted at British Home Secretary Priti Patel expressing support for asylum-seeking migrants crossing the English Channel.

Given Ben & Jerry’s recent public statement’s on the Ukraine-Russia crisis, and what their message suggests about the brand’s opinion of deterrence as a strategy, it’s unlikely they’ll be releasing a Si Vis Pacem, Para Bellum Pistachio ice cream anytime soon.