The Navy is fixing this warship’s insane rust buildup

“The most surprising part, though, is: why do you put that on your Facebook page?” 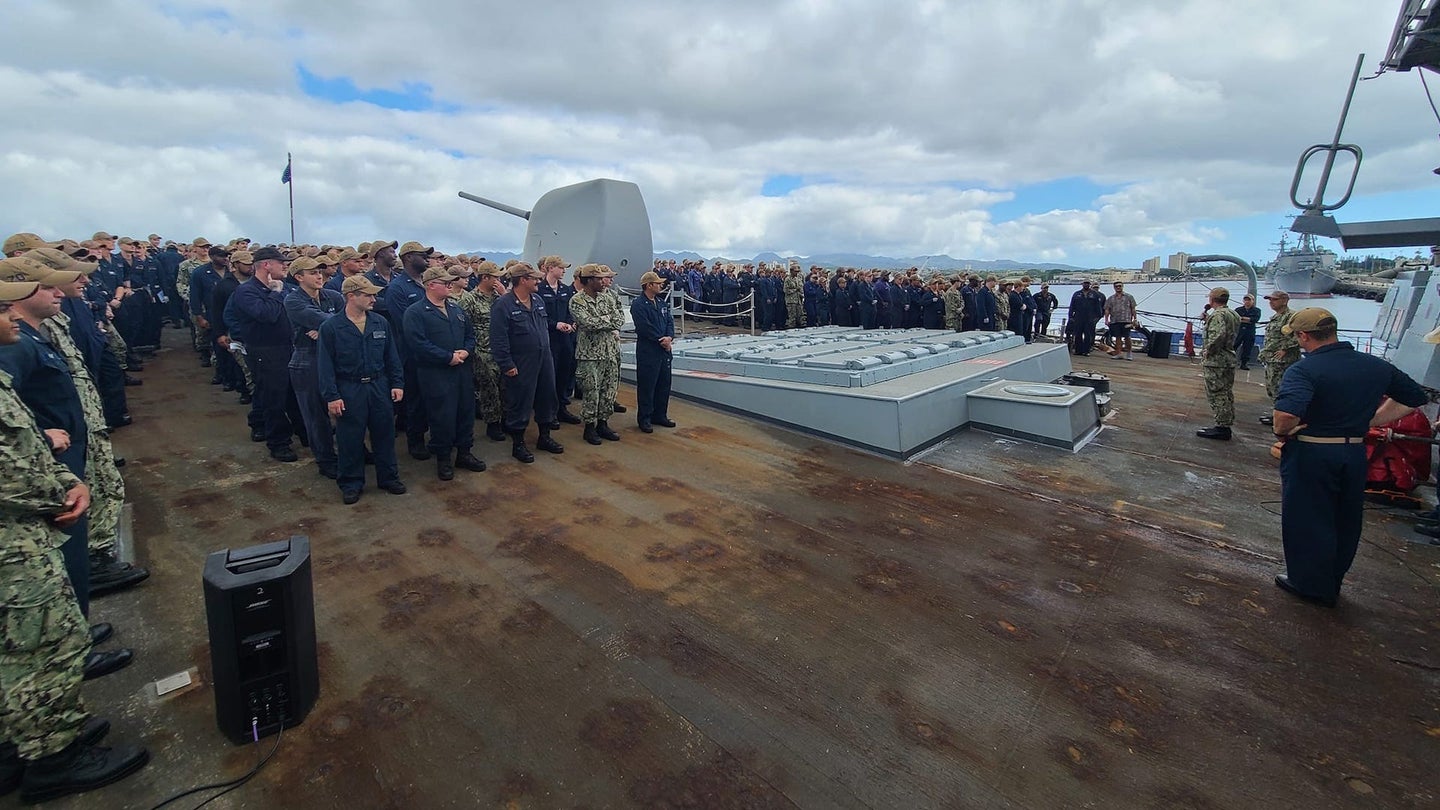 The U.S. Navy would like to assure ornery observers that the rusty-as-all-hell warship that surfaced in Facebook photos in mid-December is undergoing normal maintenance to restore it to its previously pristine condition, an official told Task & Purpose on Tuesday.

The guided-missile destroyer USS Hopper recently posted photos to its official Facebook page showing the deck of the ship coated in rust.

The photos garnered criticism over the Hopper crew’s apparent lack of topside preservation and restoration, a process that’s designed to ensure long-term protection against salt water and the elements.

Rest assured that the rust is likely not the result of time spent underway: the Hopper “is currently in a continuous maintenance availability (CMAV) period” at Joint Base Pearl Harbor-Hickam in Hawaii, said Cmdr. Arlo Abrahamson, a spokesman for U.S. Naval Surface Forces.

“Repairs to the ship’s topside and non-skid are scheduled to begin later this week,” Abrahamson told Task & Purpose in an email. “Those repairs were scheduled well in advance of the recent photos that published online.”

“I would also note that our ships and crews have high expectations for being shipshape and seaworthy,” he added. “Our ships by and large do this well. If ships fall short of these high expectations, we take measures to remediate these issues quickly.”

As Task & Purpose previously reported, rust and corrosion on Navy hulls represent evidence that a ship’s ability to perform necessary maintenance has become hindered, whether that’s by a crushing operational tempo or, as Naval Surface Force Atlantic said in 2021, limited port visits due to the novel coronavirus (COVID-19) pandemic (Abrahamson declined to provide details regarding the Hopper’s latest deployment).

But according to Bryan Clark, a senior fellow at the Hudson Institute in Washington, D.C., the Hopper’s topside rust is less a function of time spent on the high seas and more the result of in-port maintenance.

“It looks like they stripped the deck to repair and repaint it, but then it got rusty right away because they stripped the paint away and then didn’t immediately re-add paint and a non-skid coating,” Clark said. “It’s not that abnormal, but it is unusual to strip the deck and not paint it right away, although sometimes you strip it and then it rains you can’t get the paint on it in time.”

“The most surprising part, though, is: why do you put that on your Facebook page?” he added. “You think you’d put a bit more care into the photos you’re putting up if you’re a public affairs official.”

While the Hopper’s situation may not be abnormal, the guided missile destroyer isn’t the only Navy warship to show off a bad coat of rust in the last few years. As naval observers have documented, the USS Curtis Wilbur, USS James E. Williams, USS Fort McHenry, USS Arleigh Burke, USS Stout, and even the stealthy next-generation USS Zumwalt have all rolled into port with their exteriors stained brown.

Indeed, Chief of Naval Operations Michael Gilday reiterated this past year that, when it comes to preservation and restoration maintenance efforts, “appearance is important.”

“I mean, you’ve got to look sharp. We’re the world’s premier navy. We’ve got to look like it,” Gilday said during a conference in Washington, D.C. in April. “This comes down to — again, part of this, you know, Get Real, Get Better campaign for people to self-assess and self-correct, for people to stand up and take action when they see stuff wrong, and not accept stuff that’s broken; to do what you can to fix it. If you can’t, elevate it.”

In response to the assertion floated by one naval observer that the rust seen aboard the Hopper is a Navy-wide problem, Clark concurred.

“The Navy has an inability to keep ships maintained not just because they need to look good, but it’s indicative of the fact that the ship has other maintenance problems,” Clark said. “If you can’t keep a ship looking rust-free, there are probably a lot of other things that need to get done.”

But when asked about Navy-wide rust prevention issues, Abrahamson pointed to recent shipboard preservation efforts aboard the USS Benfold, the USS Spruance, and the USS Lake Champlain

“This is the broader trend we see across the force,” he told Task & Purpose.

That said, an early December Defense Visual Information Distribution System (DVIDS) press release on Lake Champlain’s CMAV efforts after an eight-month deployment with Carrier Strike Group 1 in the Western Pacific only confirms that the Navy’s current op-tempo is leaving a brown stain on its surface fleet.

“Conducting proper preservation, especially of the hull, takes a lot of time,” Boatswain’s Mate 1st Class Nicholas Manantan said in the release. “With our demanding schedule on deployment and with that operational tempo continuing during the sustainment phase, this is the most time we have had in port to conduct this large-scale preservation work.”