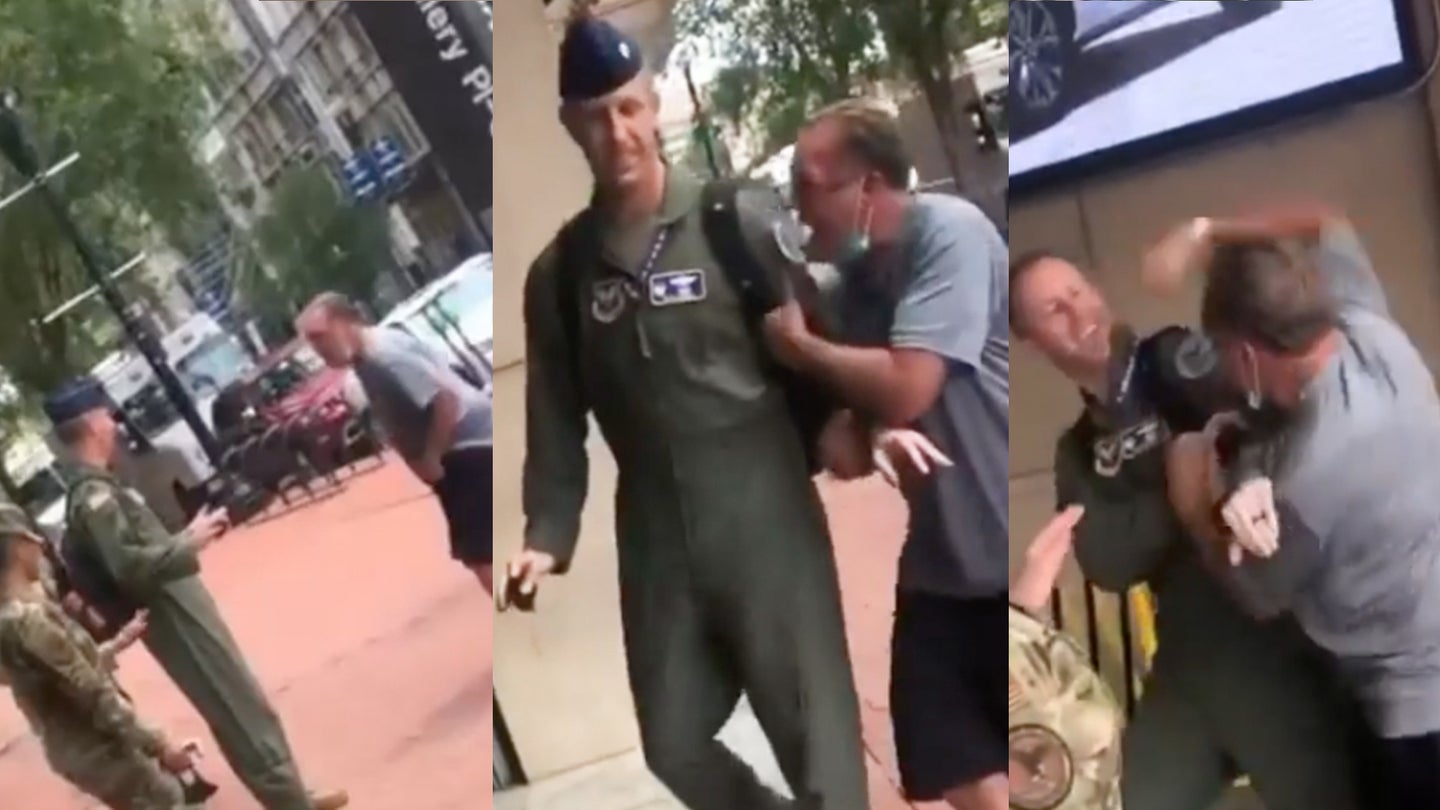 The U.S. military once considered awards for service members who exercised “courageous restraint” in Afghanistan. That controversial medal was later shelved, but an Air Force officer recently captured on video dealing with an irate man on a Washington, D.C. street is almost certainly deserving of it.

In the roughly one-minute-long video posted to Instagram by the account DMV Scoophall, a man wearing a grey t-shirt and black shorts can be seen harassing an enlisted airman wearing camouflage before an Air Force officer in a flight suit, who is presumably a lieutenant colonel judging by the rank on his cap, stands in the way and tries to defuse the situation.

You can watch the video below:

“Please step away,” the officer says as he tries to enter the Gallery Place-Chinatown Metro station near the National Portrait Gallery. “We’re good. Walk away.”

It’s unclear when the video was filmed but it has been viewed more than 12,000 times since being posted on Tuesday.

As the video shows, the man becomes more irate and screams several unintelligible phrases before pushing the officer and knocking off his cap. “I’ll fight you!” he says before wildly swinging and throwing punches the officer avoids.

The man swings wildly several times as the officer dodges punches in an attempt to back away and move on. Eventually, the man knocks the officer’s watch to the ground and picks it up. “This is my watch. I took this shit!” he says.

The video abruptly ends with the officer trying to retrieve his watch, but it is apparent that he showed remarkable restraint in trying to diffuse a situation that was quickly spiraling out of control. The standing rules of engagement for U.S. forces come to mind in this scenario, where an irate man demonstrates both “hostile intent” in his behavior and a “hostile act” in throwing punches, justifying the officer to use “appropriate force … to deter or neutralize” the attacker.

U.S. troops sometimes refer to their escalation of force options as the five S’s, as Adam Tiffen wrote in 2015: “shout, show, shove, shoot to warn, and then finally, shoot to kill.”

In other words, this Air Force officer was well within his rights in a military context to knock the man out and go about his day. Or, in the words of one commenter, “Man he woulda went night night.”

The officer instead took the high road and engaged in de-escalation, as the rules of engagement allow “when time and circumstances permit.” Fortunately, in this situation, it worked out.

“He showed incredible restraint,” one member of the Air Force community on Reddit said of the video, though many showed their support for a different option: “Starch him, yell ‘worldstar!!!’, break out phone, live stream … standing over his unconscious body singing the Air Force song.”

“Missed opportunity for sure,” another commenter wrote. “[Should have] smacked his face with the Hydroflask and score[d] that sponsorship.”