“Does it have camouflage and your name on it? Does it have your rank on it? Then you can’t be wearing it.” 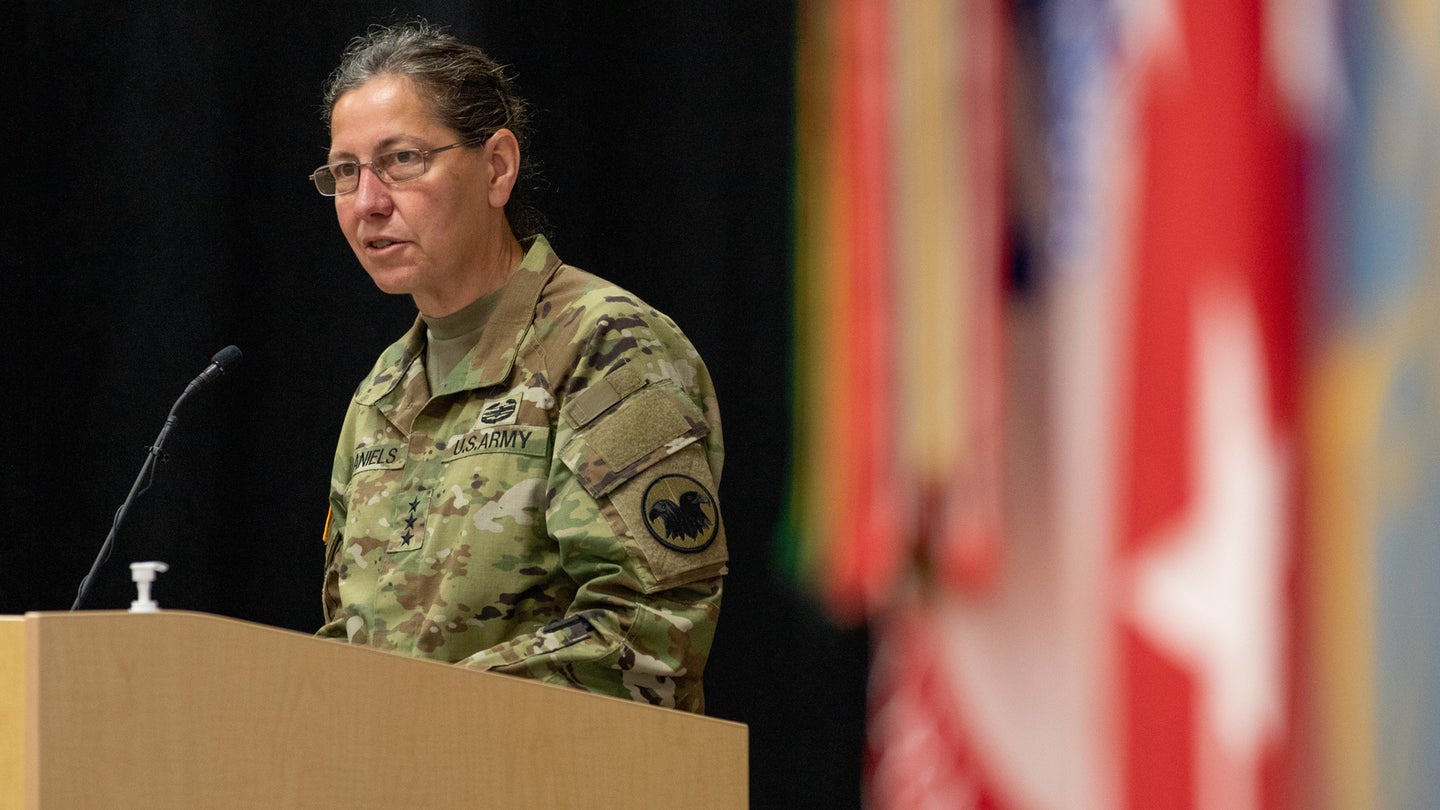 The message from the Chief of the Army Reserve to reservists considering a run for political office is quite simple: “Step away from the uniform.”

In an interview with Task & Purpose on Tuesday, Lt. Gen. Jody Daniels said while she understands that reservists are proud of their military service, they have to be aware of the regulations for what they can and cannot do in their political campaigns. That includes wearing their uniforms in political ads or political events.

“Don’t do it,” she said. “You just can’t — the big thing is you can’t wear your uniform in a political ad or endorsement of any other candidate out there. So don’t be standing next to someone who’s running, in uniform. You can stand there as a citizen and support them, you can give them money, you can do whatever you want. But the uniform then makes it a military affiliation and that’s not authorized … Step away from the uniform.”

The Army Reserve, similar to the National Guard, allows individuals to serve as soldiers part-time while also holding down civilian jobs. That separation makes it possible for reservists to, say, run for political office in a civilian capacity, but it also presents challenges for how reservists can use their military service in their campaigns or political ads.

According to Defense Department policy, service members who are not on active duty have a bit more freedom to participate in politics than those on active duty. They can participate in political fundraisers or attend rallies as long as they aren’t in uniform, for example. But reservists running for political office still have lines they can’t cross when it comes to using their military background in their campaigns.

But those regulations haven’t stopped reservists from crossing the line in the past. Just last year, an Army Reserve second lieutenant was investigated by the Army for using photos of himself in uniform for his congressional campaign and conducting a campaign interview in uniform. In September, another Army Reserve officer running for political office tweeted a photo of himself in uniform holding a handgun, using it as a way to differentiate himself from his opponent.

Then, just this year, Tulsi Gabbard, an Army Reserve lieutenant colonel and former congresswoman who frequently speaks out on political issues, was criticized for posting Russian disinformation about U.S. support for Ukrainian biolabs. Last year, Gabbard posted a video in uniform in which she warned about the “death and suffering” that could follow “if we allow the mainstream media, the military-industrial complex, self-serving politicians — if we allow them to lead us now into the apocalypse of World War III.”

Gabbard said in the video that she was “just wrapping up” her reserve duty at Fort Bragg, North Carolina.

Daniels said on Tuesday that reservists have to be cognizant of the separation between their military and civilian lives. In uniform, she said, soldiers have to know their “left and right bounds” when it comes to expressing their thoughts and keep in mind the “standard of character” that the Army expects of them.

In the Reserves, Daniels said, commanders frequently speak with soldiers who are considering running for political office to remind them of what is and isn’t allowed, such as using their uniform or rank in their campaign. It’s unclear, however, what consequences soldiers can face for violating the policies.

“We try to work with anyone who goes up for any office to make sure they get counseling through the [public affairs] folks, through their leadership, through whoever else we need — the lawyers — to help them understand what’s acceptable and what’s not according to all the different regulations,” Daniels said. She added that they sometimes have to do “follow-ups” to “reinforce some of those messages,” emphasizing the reinforcement piece in a way that insinuated it is likely not a pleasant conversation to have.

There was one Reserve lieutenant in particular who had to be reminded of the regulations, she said, though she didn’t specify who.

“We had to reinforce multiple times: ‘You’ve crossed a line. That’s a uniform. Does it have camouflage and your name on it? Does it have your rank on it? Then you can’t be wearing it. Even if it’s your solid uniform, it’s still got your rank on it, you can’t — nope, that doesn’t go in an ad. You cannot do it,” Daniels said. “You’d think that would be pretty clear and easy, but people are so proud of their service they want to show it off. It’s like yes, but you can’t do that. Not allowed.”