"One does not simply submit a travel claim in DTS." 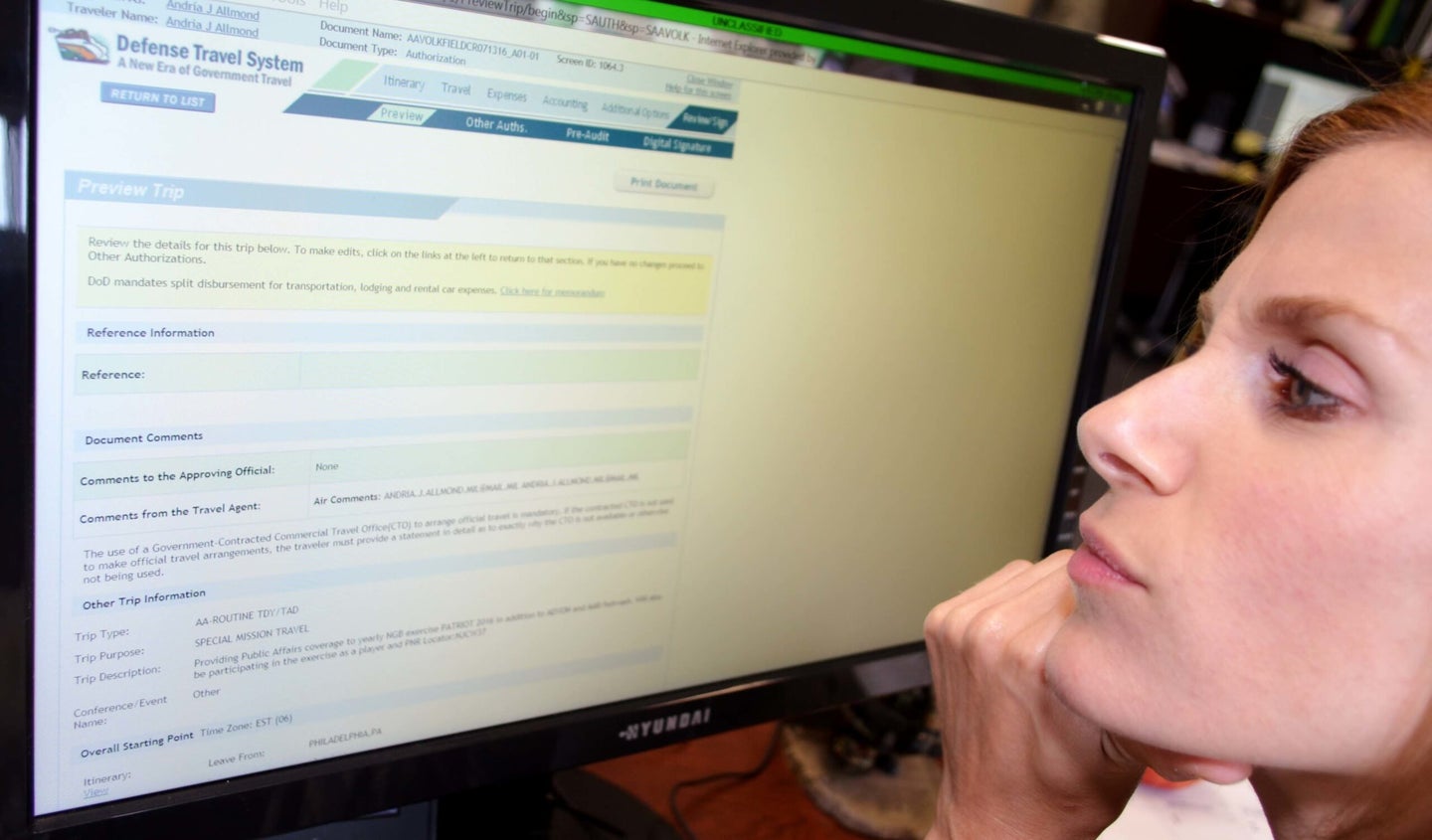 Tech. Sgt. Andria Allmond, a 111th Attack Wing photojournalist, stares in confusion at her computer screen while working in the Defense Travel System (DTS) at Horsham Air Guard Station, Aug. 8, 2016. DTS is a is the travel system that handles all military travel plans and travel pay for all temporary duty, or in some cases, home station training for members outside the commuting area. (U.S. Air National Guard photo by Master Sgt. Christopher Botzum).
SHARE

The U.S. military travel and expense booking service known to service members as the Defense Travel System (DTS) and also as perhaps the most frustrating piece of software imaginable is finally getting an upgrade, according to Stars & Stripes, though it won’t be fully operational until 2025.

The new-and-improved system dubbed “MyTravel” will allow Department of Defense users to book trips and manage travel-related transactions. The travel software company SAP Concur was awarded the $374 million contract on Sept. 13 to develop the system, which “combines industry-leading travel technology and Travel Management Company services to deliver a ‘travel as a service capability’ based on a subscription pricing model,” according to the contract description.

The modern cloud-based system will provide an easy-to-use interface and relies on artificial intelligence to audit expenses, the contract justification states. It will also mean the government will no longer need to maintain its own travel-booking system, which is not “as user-friendly” as the alternative.

That’s a nice way to characterize a system that’s often described with profanity. As news articles, online memes, and even official military press releases can attest, service members have long despised DTS. One “Lord of the Rings”-inspired meme, for example, shows actor Sean Bean making a ring shape with his hand along with the caption, “One does not simply submit a travel claim in DTS.” Others feature a teacher in front of a full chalkboard which sarcastically proclaims, “that’s how you sign a voucher on DTS.” One Army first sergeant even uploaded a cartoon titled “DTS Nightmare” to the military’s official imagery portal in 2016.

And then there are the personal accounts from current and former service members who have slogged through the jungle of digital paperwork that is DTS, only to file their forms and then find out at the eleventh hour that there was a problem.

That was the case for a pair of Army veterans who spoke to Task & Purpose in May and described how they arrived at the airport in South Korea with all their belongings, including their pet cat, and found that their tickets to their next duty station in Germany had not been paid for.

“We had to use a nice Korean man’s cell phone to make about 67 phone calls, and got it straightened out and the cat ok to leave the country and enter Europe with literally 5 minutes to spare before our plane closed the doors,” said former Army Staff Sgt. Victoria Chamberlin. “I am remembering language barriers, and we had 3 carts worth of bags with us that would have made it hard to turn around and leave – plus the cat. Oof.”

The Defense Department anticipates transitioning about 2,000 users and 1,000 travel transactions to the new system in Fiscal Year 2021, according to the documents. That number is expected to increase to 30,000 transactions the following year until reaching a “steady state” of 3.8 million transactions by 2025.

The Department of Defense first began the process of replacing the “aging and inefficient” Defense Travel System in August 2018 after awarding a $9.3 million contract to SAP Concur to develop a prototype. Then in May 2021, negotiations began for the final contract that was signed last week.

Still, it couldn’t arrive soon enough. As retired Army Col. Arnold Strong told Task & Purpose earlier this year, he found DTS so complicated and difficult to use that he nicknamed it the “Don’t Travel Service.”

“It’s been challenging for soldiers, leaders, NCOs, officers, and lower enlisted alike to navigate how to actually get from Point A to Point B,” Strong said. “I would usually run everything by an E-5 clerk that I had – even though it’s supposed to be very autonomous – I always wanted to make sure that I had expertise. Otherwise, you end up having long layovers, having poor connections, because it’s designed to find the cheapest source available for the government. So you end up going in sort of chaotic directions.”

It’s almost fitting that a replacement for DTS will be slow to arrive, considering that one of the main complaints about the legacy system is that it’s so cumbersome and hard to use, it often results in delays.