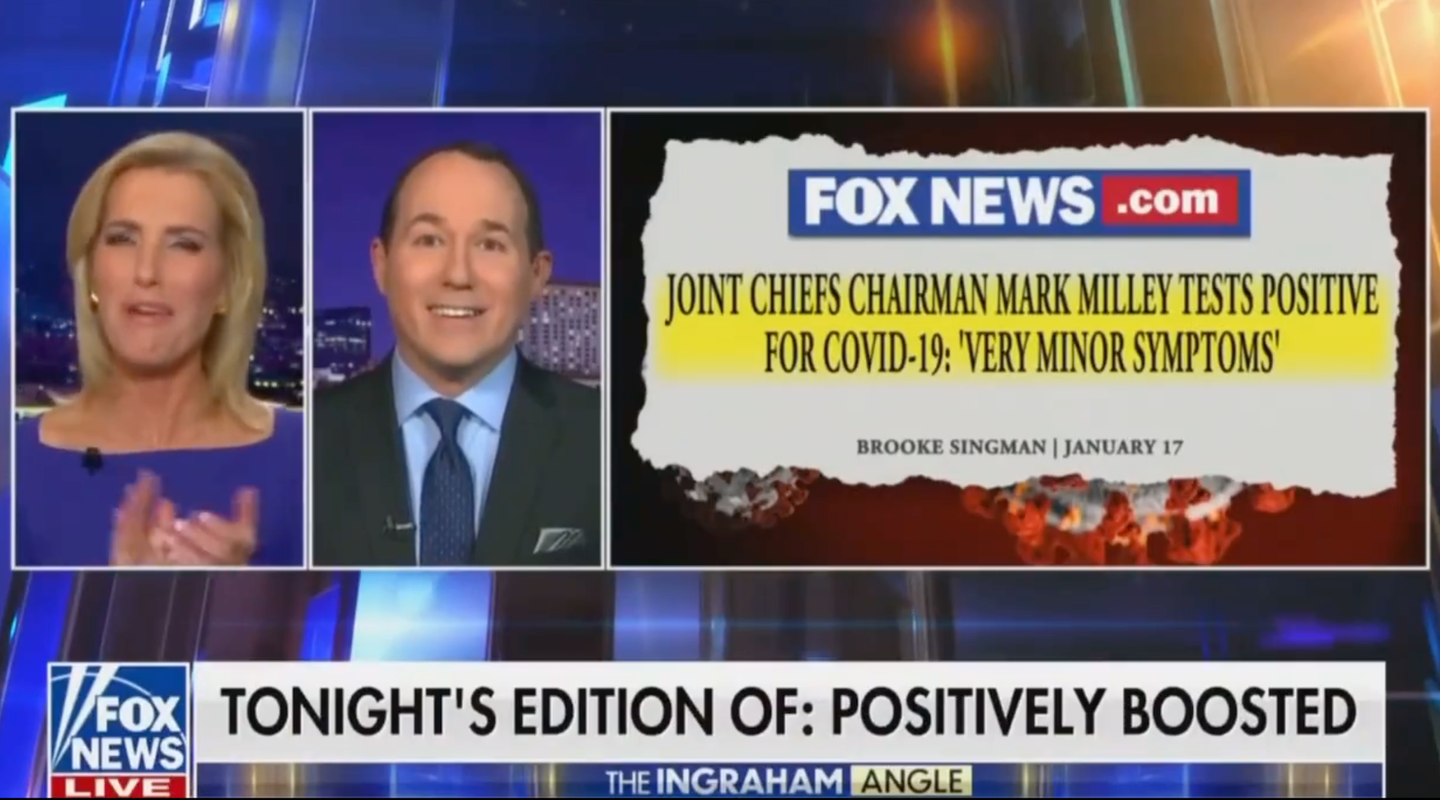 Fox News personality Laura Ingraham could hardly contain her glee when she recently informed her viewers that Army Gen. Mark Milley, chairman of the Joint Chiefs of Staff, had contracted the novel coronavirus (COVID-19).

During a segment of her show that features famous people who have contracted COVID-19 despite receiving vaccinations against the virus, Ingraham clapped while announcing that “our favorite Mark Milley” had tested positive for the disease. Ingraham was noticeably less enthusiastic when she added that Marine Corps Commandant Gen. David Berger had also tested positive.

This is not the first time that Ingraham has looked elated at the news that a senior defense official has come down with COVID-19. Ingraham laughed during a Jan. 4 show when a Fox News contributor said that Defense Secretary Lloyd Austin had become sickened. She was particularly amused at a picture that Fox News showed of Austin wearing a face shield during a visit to the Philippines in July.

But this type of vitriol directed against Milley has become common since several books published last year portrayed Milley as remaining  at odds with former President Donald Trump during the last year of Trump’s administration.

Trump even demanded that Milley be tried for treason after authors Robert Costa and Bob Woodward claimed in their book “Peril” that Milley had assured Chinese Gen. Li Zuocheng in October 2020 that the United States was not planning a surprise attack on China by saying “If we’re going to attack, I’m going to call you ahead of time. It’s not going to be a surprise.”

These revelations have made Milley a favorite target among far-right political figures. Sebastian Gorka, who briefly served on Trump’s National Security Council, told right-wing media outlet Newsmax in September that Milley was a political activist, not a general, who was trying to undermine Trump.

“Warning the Chinese of fake things you are propagating about the commander in chief is the definition of treason – aiding and abetting our enemies,” Gorka said during the Sept. 15 interview. “This man has to be arrested, investigated, and – if he’s found guilty – locked away.”

Noah Malgeri, a Republican running for Congress in Nevada, has called for Milley to be court-martialed and publicly hanged if he is found guilty.

“We need to get back to our patriotic, liberty-loving roots,” Malgeri told Veterans in Politics International during a Dec. 26 interview. “What did they used to do to traitors if they are convicted by a court? They would execute them.”

Milley, who has acknowledged speaking to Woodward for the book, told lawmakers in September that he would never “tip off any enemy to what the United States is going to do in an actual plan.”

“I said: ‘Gen. Li, there’s not going to be a war; there’s not going to be an attack between great powers; and if there was, the tensions would build up; there’d be calls going back and forth from all kinds of senior officials,’” Milley told the House Armed Services Committee. “I said: ‘Hell; Gen. Li, I’ll probably give you a call. But we’re not going to attack you. Trust me. We’re not going to attack you. These are two great powers, and I am doing my best to transmit the president’s intent – President Trump’s intent – to ensure that the American people are protected from an incident that could escalate.”

However, conservatives have also launched personal attacks at Milley for the Defense Department’s attempts to fight racism and extremism in the ranks. Fox News personality Tucker Carlson went as far as to call Milley “a pig” and “stupid” after Milley told lawmakers why he wants to understand “white rage.”

Milley declined to comment for this story. In December, he stated at the Wall Street Journal CEO Council that he is a public figure so he expects to be criticized.

“Sometimes it’s disappointing when they become ad hominem attacks, and name-calling, and all that kind of business,” Milley said at the Dec. 7 event. “But that’s part of the turf.  You know, if you don’t want that then move on to some other walk of life, because you’re going to take it if you’re in this job.  Where it becomes risky, in my view, is from an institutional standpoint.”

The American public’s trust in the military has dropped sharply from 2018 to 2021, according to a recent survey conducted by the Ronald Reagan Presidential Foundation and Institute. The erosion in trust was particularly striking with Republicans.

“When people start ripping apart the institutions of this country, that could potentially become dangerous,” Milley said in December. “And the institution of the military is critical to the defense of this republic.  And to the extent that there’s institutional attacks, that bothers me a lot.”