A top Marine lawyer admitted to once doing nothing as troops beat a ‘young gay Marine,’ investigation finds

The investigation found his comments did not constitute misconduct. 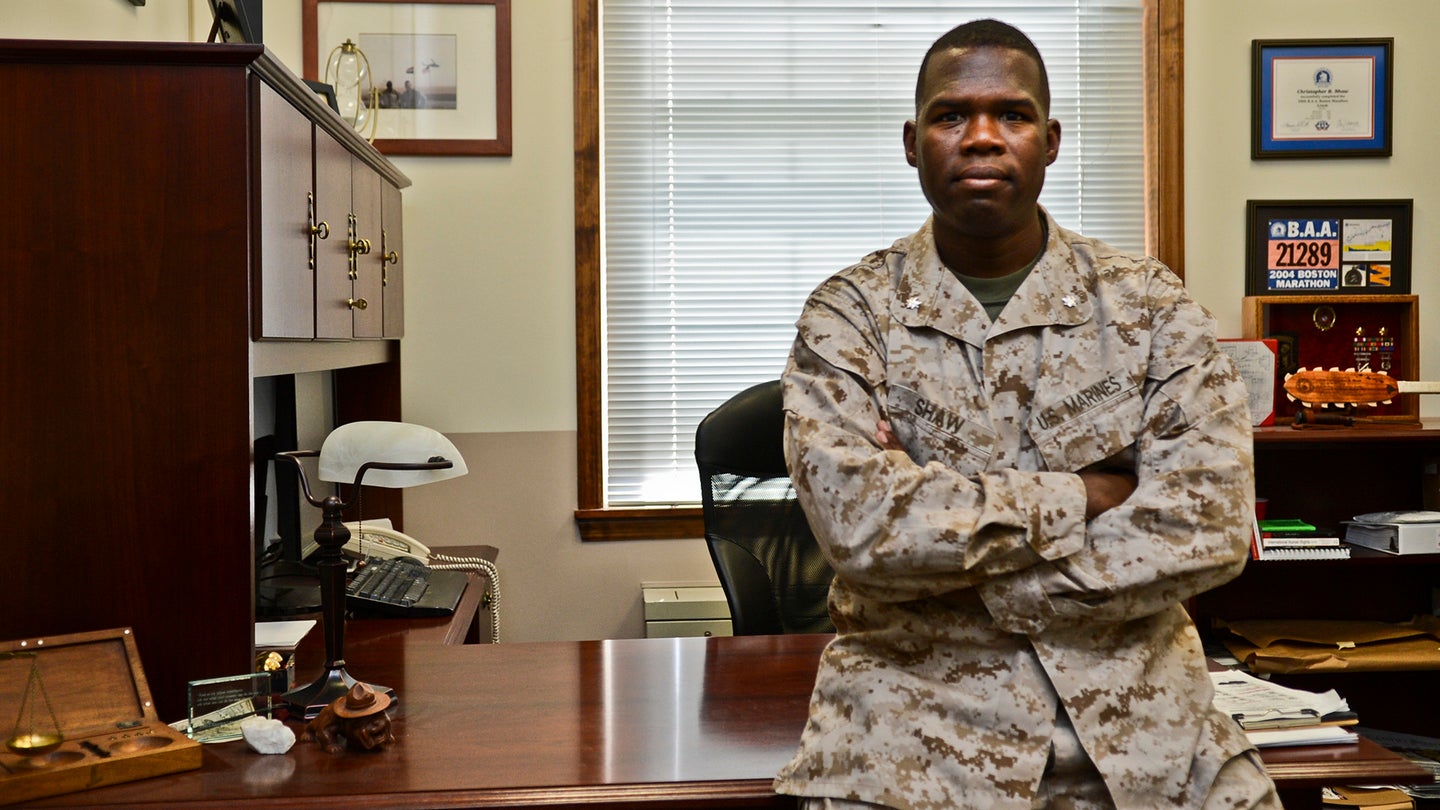 Col. Christopher B. Shaw, shown as a lieutenant colonel in this picture, was a deputy director of the of the Judge Advocate Division. (Cpl. Emmanuel Ramos/U.S. Marine Corps).
SHARE

Marine Col. Christopher Shaw, who was serving as a deputy director of the Judge Advocate Division at the time, admitted at a meeting last year with Marine defense attorneys that he once had allowed a “young gay” Marine under his command to be beaten for falling behind on a hike, a command investigation found.

The investigation, which Task & Purpose has obtained, was prompted by an anonymous complaint that the Inspector General of the Marine Corps Command received last year, shortly after Shaw held several meetings at Camp Lejeune, North Carolina, on Nov. 18.  The complainant accused Shaw of making improper comments at two of the meetings that rose to the level of unlawful command influence, bullying, violating the Privacy Act, interfering with an adverse administrative proceeding, and other alleged transgressions.

Shaw mentioned the incident involving the gay Marine while meeting with Marines assigned to the Defense Service Office to illustrate how the Marine Corps’ standards for unprofessional behavior have changed over time, according to the command investigation.

“He used a specific example from his time as a second lieutenant in which a ‘young gay Marine’ was ‘beat up’ during a hike because he was falling out due to his hungover status,” according to the complaint, which was included in the investigation. “He stated this incident was ‘outside of the statute of limitations’ so he felt like he could share that he allowed this beating to occur. His comment that the event was ‘outside the statute of limitations’ troubled several in the audience, as many of our clients have their careers affected (whether by loss of rank or adverse characterizations of service) as a result of actions taken that are not prosecutable for one reason or another, to include the statute of limitations.”

The complainant accused Shaw of smiling and laughing while he told the story, adding that Shaw never explained why the fact that the Marine was gay had any relevance. “The fact that he mentioned it suggested that the sexual orientation of the Marine was a factor in his determination to allow the beating to occur, which is troubling,” the complaint says.

The investigation found that Marine attorneys who attended the Nov. 18 meeting recalled Shaw discussing an incident in which he allowed a gay Marine to be beaten by his comrades.

“He stated he knew the Marine had fallen out, and that other Marines/NCOs/leaders in the platoon had fallen back and were beating him up for falling out, but he stayed at the front of the platoon and intentionally did not look back, for as he said ‘you know, plausible deniability,’” Capt. Michael Blackburn wrote in a statement for the investigation. “Col Shaw told this story with the perspective that it was a personal failure on his part, and he prefaced this anecdote by musing to us that he could tell us this story because ‘the statute of limitations had run.’”

Maj. Kurt Sorensen, of Camp Lejeune’s Defense Services Organization, provided a written statement for the investigation, in which he said he was offended by Shaw’s story and the way he told it.

In the investigation report, Col. Peter Houtz, who led the command investigation, confirmed that Shaw had told the story about how a gay Marine was beaten on a hike without offering any explanation as to why the story, or the details of the Marine’s sexuality, were relevant. But Houtz determined that Shaw did not break any rules.

“It is the IO’s [investigating officer’s] opinion that Col Shaw’s ‘hike’ story was odd and displayed a lack of judgment and situational awareness but did not constitute misconduct under any of the references,” Houtz wrote.

Shaw, who is currently assigned to the Manpower Plans and Policy Division of Manpower and Reserve Affairs, provided the investigation with a written statement about his comments during the Nov. 18 meeting that did not include any reference to his story about allowing a gay Marine to be beaten.

Marine Corps spokesman Maj. James Stenger provided Task & Purpose with a statement regarding Shaw’s comments about the incident that did not include any information about whether Shaw had been disciplined for the matter.

“The witness statement provided in the investigation describes disturbing and inappropriate behavior that should never be tolerated. Hateful and bigoted language or behavior have no place in our Corps,” Stenger said. “If any such administrative or disciplinary action was taken following the incident described in the investigation, it would be noted in Col. Shaw’s military record, which is protected material under the Privacy Act.”

In a separate but related matter, a military judge ruled in February that Shaw’s remarks to one of the military attorneys during the Nov. 18 meeting constituted unlawful command influence in the case of a Navy Corpsman, who was one of three service members accused of killing an American contractor in Iraq.  As a result, the judge dismissed all charges against the Corpsman, Chief Petty Officer Eric Gilmet.

Capt. Matthew Thomas, who represented Gilmet at the time, was one of the military attorneys who attended the Nov. 18 meeting with Shaw. Thomas provided a written statement for the investigation recalling how Shaw said it was a “legal fiction” for military defense attorneys to think that they were protected from outside influences.

“Colonel Shaw then directly squared his shoulders and chair towards me and he did not break eye contact with me for a significant period of time,” Thomas wrote. “During that time, Colonel Shaw specifically stated, ‘Captain Thomas I know who you are and what cases you are on and you are not protected.’ Colonel Shaw followed up by stating, ‘…the FitRep [fitness report] process may shield you, but you are not protected. Our community is small and there are promotion boards and the lawyer on the promotion board will know you.’ Colonel Shaw reiterated comments such as ‘shielded but not protected,’ multiple times.”

In his statement, Shaw wrote that he was not threatening Thomas. Instead, he was trying to explain that Marine defense attorneys cannot be protected by their chain of command from media and political scrutiny.

“I recall that I did state something to the effect that it is a ‘legal fiction’ to believe that the separate defense counsel chain of command precludes JA [judge advocate] leaders from knowing how DCs [defense counsels] do their job, but this comment was intended merely to impart that JA leaders recognize the tough work DCs do rather than to instill a fear of retribution; far from it,” Shaw wrote.

But military judge Navy Cmdr. Hayes C. Larsen ruled in February that Shaw had in fact made threatening comments to Thomas, adding, “What occurred would confirm the fears of some members of the public that the military justice system is stacked against the Accused and designed to come to the result the military desires.”

Navy and Marine Corps attorneys have appealed Larsen’s decision. Attorneys for the other two service members in the case — Marine Raiders Gunnery Sgt. Daniel Draher, and Gunnery Sgt. Joshua Negron — argue that all charges against their clients should also be dropped due to unlawful command influence.

Houtz did not determine whether Shaw had committed unlawful command influence because the matter will be adjudicated during court-martial proceedings. He did conclude that Shaw’s unprofessional comments “do not reflect critical or sustained flaws in Col Shaw’s abilities as a Marine Officer or Judge Advocate.”