The decision-makers are finally listening, and our elected leaders are passing bills, rewriting regulations, and conducting studies. 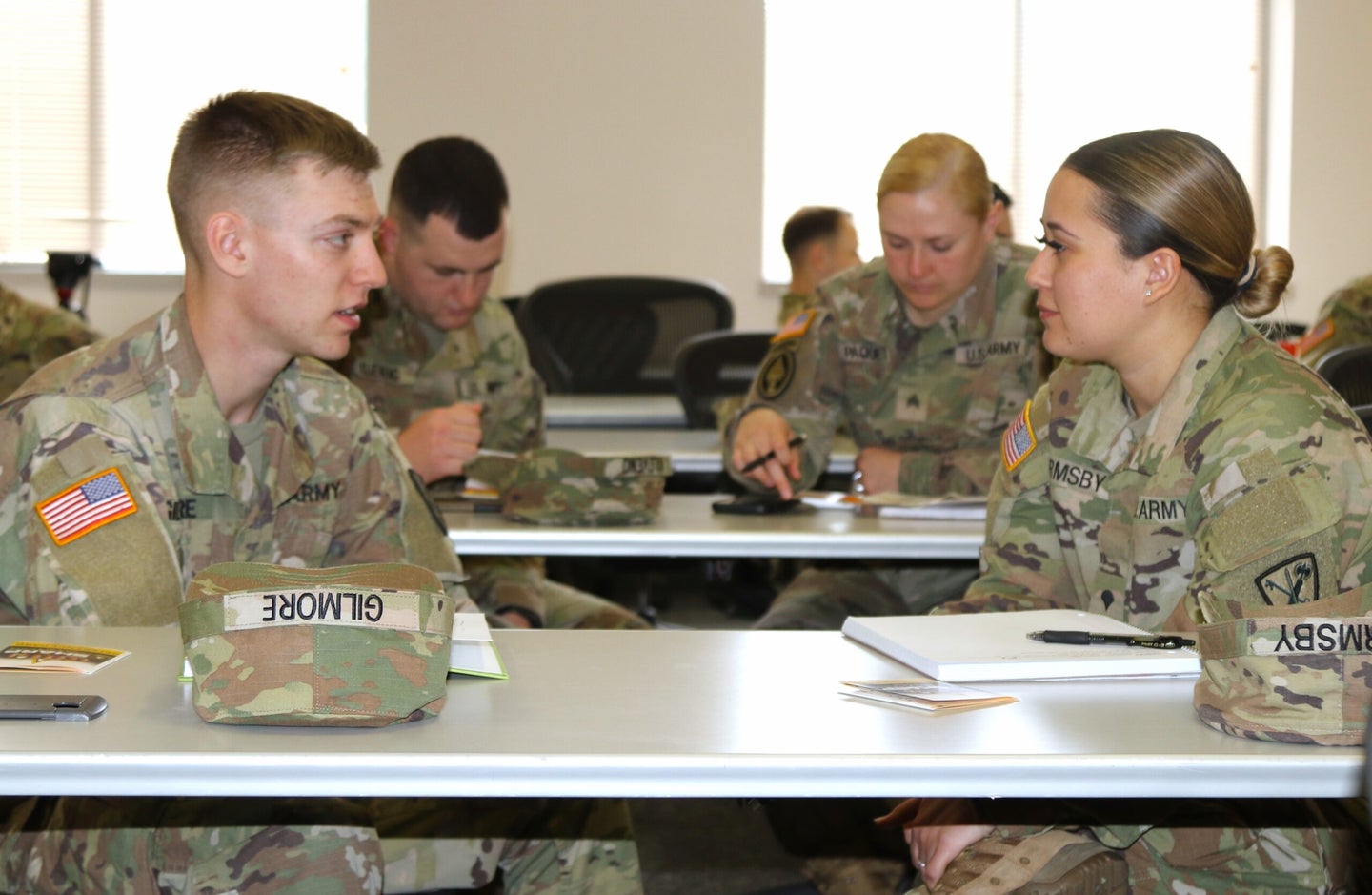 Soldiers with the 42nd Military Police Brigade roleplay scenarios in which they are able to help victims of sexual assault in the newly-established Sexual Harassment Assault Response and Prevention (SHARP) Protection Liaison Team training, on Joint Base Lewis-McChord, Wash., May 11, 2022. (Spc. Richard Carlisi/U.S. Army).
SHARE

“Why would I say anything? All they’ll get is a slap on the wrist.” This question once exemplified the mindset of countless soldiers who chose not to report incidents of sexual harassment. But the concerns behind this mindset have finally been addressed. Now soldiers guilty of sexual harassment could face having handcuffs put on their wrists instead of receiving the imaginary, painless “slap” that most never got anyway. With Executive Order 14062 signed, the commonsense reform for sexual harassment and assault under the Uniform Code of Military Justice (UCMJ) is finally underway.

Though daunting and laden with legal jargon, the 910-page National Defense Authorization Act of Fiscal Year 2022 (NDAA 22) will enact necessary change. Combining elements of the Vanessa Guillen Act, Department of Defense regulations, and the NDAA 22, the Army’s Sexual Harassment Assault Response Prevention (SHARP) program is transforming from top to bottom. With the Army’s “People First” initiative, these changes are helping to protect those who protect our country.

The BLUF (Bottom Line Up Front)

From privates straight out of basic training to tenured General Officers, everyone understands the SHARP program’s mission — to eradicate sexual harassment and sexual assault throughout the Army’s ranks. In many respects, the program has historically fallen short. However, with constant policy updates occurring over the past few months, the SHARP program has made drastic changes that most soldiers and leaders haven’t even heard about yet.

The death of Spc. Vanessa Guillen sparked outrage throughout the country, prompting senior military leaders and elected officials to finally get serious about sexual harassment in the military. Guillen was a 20-year-old Soldier serving at Fort Hood when, one day after work at the armory, she went missing. Before her disappearance, she confided in her family members that she was being sexually harassed by one of her supervisors, though no action was ever taken. After her disappearance and a nationwide search, law enforcement discovered Guillen’s remains near the Leon River in Bell County, Texas. Authorities ultimately concluded that a fellow Soldier had murdered her, though it was also determined that her killer had not been the one sexually harassing her.

Vanessa Guillen’s family founded the IAmVanessGuillen foundation, an organization committed to reforming military policies surrounding Soldier protection. Her family proposed the Vanessa Guillen Act, a law that would reform the way the military handles sexual harassment and assault. Vanessa Guillen’s impact and her family’s perseverance led to an Army-wide review of the SHARP program, changes in DOD policy, and eventually, changes in public law.

Responding to demands for accountability, the former Secretary of the Army, Ryan D. McCarthy, announced an independent investigation into Fort Hood and its SHARP program. On Nov 18, 2020, when the Fort Hood Review was published, the reviewing committee offered 32 SHARP-related recommendations for the Army to implement. The review prompted the birth of the People First Task Force, committed to implementing Army-wide change to existing programs and policies based on the committee’s findings and recommendations.

Of the six SHARP remediations implemented in 2021, one of the most pivotal changes was updating the Department of Defense Instruction (DODI) 6495.02: Sexual Assault Prevention and Response’s procedures. Victims could now confide in the chain of command about a sexual assault without being forced to file an unrestricted report. To those outside of military leadership positions, this change may seem minor. However, it helps build a foundation for transparency and trust. Previously, if a victim would disclose information about a sexual assault to a leader, the Soldier would be forced to undergo a Criminal Investigation Division investigation, potentially prolonging the healing process and creating more stressors.

A goal of the SHARP program is to give power back to the victim, including the right to choose how they want to proceed in the aftermath of an incident. Previously, the regulation further victimized the Soldier by forcing an internal quandary. The soldiers could not put absolute trust in their leadership without worrying they would be giving up their freedom to choose their reporting options in the process. Now military leaders and victims can build trust and transparency, further strengthening the culture the Army is trying to foster.

Sexual harassment is a punishable offense under military law

Perhaps the most well-known and celebrated change is that sexual harassment is now punishable under the Uniform Code of Military Justice (UCMJ). Surprisingly, before the passage of this act, sexual harassment only amounted to a violation of Command Policy. There were no legal ramifications within the UCMJ to punish sexual harassment offenders. This distinction meant that Commanders alone were the ones who determined the consequences of such offenses, often handing down less severe punishments.

Independent parties, not the Chain of Command, will investigate sexual harassment formal complaints

Impartiality, a necessity for all legitimate investigations, can potentially be compromised with the current procedures. As of right now, an investigating officer appointed from within a given unit handles sexual harassment investigations. The new policy ensures investigating officials are not in the same unit as the victim or alleged offender. This change begins on Dec. 27th, 2023.

Currently, SARCs and Victim Advocates (VAs) are additional duty positions or temporary two-year positions. The Non-Commissioned Officer (NCO) or Officer serving in the role must take an 80-hour course to meet credentialing requirements. With conflicting priorities and outdated training, many collateral SHARP representatives are ill-equipped to handle their position with the necessary time and care. A SARC MOS would ensure personnel can focus solely on their occupation, keeping up-to-date on the constantly changing regulations.

The NDAA 22 passed other elements to highlight SHARP changes as well. The Secretary of Defense must now issue a report on sexual harassment and assault prevention training, and the military will continue to catalog annual reports of sexual assault data. The Act also establishes a component of the Office of the Secretary to track and document all complaints of retaliation from personnel who have filed sexual harassment and sexual assault complaints.

Civilian and military communities alike are demanding accountability for and prevention of sexual harassment and sexual assault for our service members. The decision-makers are finally listening, and our elected leaders are passing bills, rewriting regulations, and conducting studies. As long as military leaders continue to focus on upholding moral standards protecting their own, and soldiers and families continue to press for change, the Army can cultivate a culture and legal structure that prevents sexual harassment and sexual assault and punishes those who cannot abide.

For those who are bitter, resentful, or pessimistic about sexual harassment and assault in the military, I recommend you read the new DOD Directives and NDAA 22. These changes will make the Army a better and safer workplace. Just as soldiers protect the United States on deployments overseas, leadership owes the same level of protection and dedication to soldiers serving on the homefront.

Capt. Jorie P. Mason currently serves as a student in Air Defense Captains Career Course in Fort Sill, Oklahoma. She graduated from the United States Military Academy in 2018, where she received a Bachelor of Science in English. CPT Mason served as an Avenger Platoon Leader, Executive Officer, and SHARP Victim Advocate in Ansbach, Germany, with 5-4 ADA from 2019 to 2021.