The night vision glasses would be smaller and more powerful than the optics troops have now. 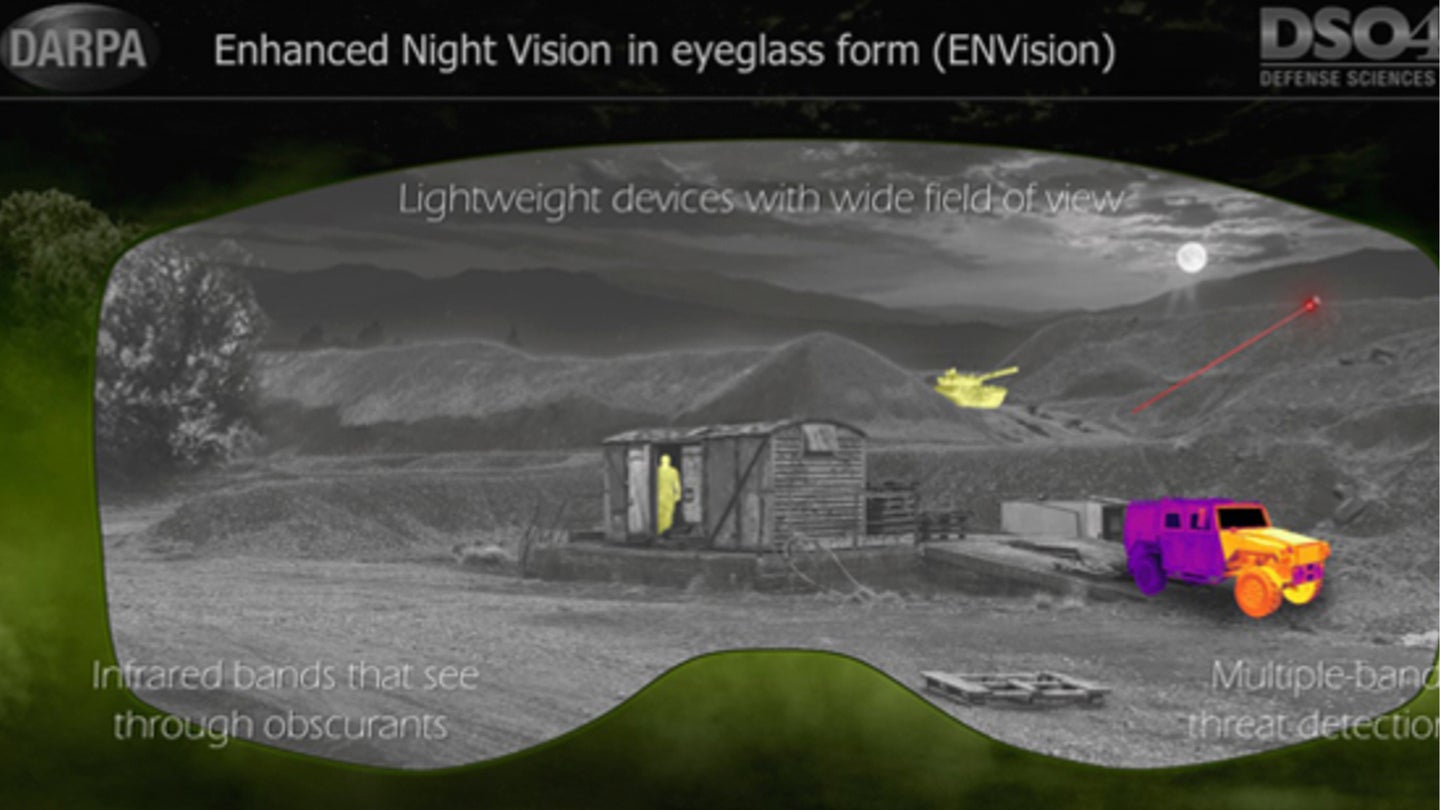 The Enhanced Night Vision in Eyeglass Form program is meant to produce optics that are both smaller and more powerful than the night vision goggles issued to troops today. (Photo courtesy of the Defense Advanced Research Projects Agency.).
SHARE

The U.S. military is looking for ways to make night vision goggles even more badass.

Last year, the Army unveiled its new and revolutionary Enhanced Night Vision Goggle-Binoculars, which allow soldiers to see the illuminated outlines of people, obstacles, and machine gun fire with a remarkable level of clarity that hitherto had only existed in big-budget movies.

Now the Defense Advanced Research Projects Agency wants U.S. troops to have night vision optics that are as lightweight and compact as a pair of regular eyeglasses.

The agency’s latest endeavor is the Enhanced Night Vision in Eyeglass Form (ENVision) program, which is meant to produce optics that are both smaller and more powerful than the night vision goggles issued to troops today, DARPA announced in a Jan. 12 news release.

Current night vision optics, which weigh about 2 pounds, are bulky and weigh heavy on a helmet, making it difficult for troops to turn their necks and leading to injuries over time, the news release says. Another issue with the night vision goggles that service members currently use is they provide a narrow field of vision and are limited to near-infrared spectral bands.

For these reasons, DARPA has selected a total of 10 teams from defense industry and universities to work on the night vision glasses.

“The teams in the first technical area are developing technologies that could drastically reduce the bulk and volume of objective, intensifier, and eyepiece of a night vision system,” Rohith Chandrasekar, ENVision’s program manager, said in the news release. “Teams in the second technical area are exploring ways to directly upconvert and amplify light from the infrared to the visible using new materials and up-conversion processes. These efforts could potentially lead to all-optical night vision systems in the future without the need for image intensifiers.”

Any efforts to reduce the weight of military gear is likely to be appreciated by American service members, who had to wear increasingly heavy and bulky sets of body armor during the Iraq and Afghanistan wars. One Enhanced Small Arms Protective Insert plate alone can weigh up to 5 pounds, and American service members have had to wear up to four of them at any given time.

“Ounces equal pounds, and pounds equal pain,” Marine Sgt. Jarod Chambers told CBS News for a 2013 story about lighter weapons. “So, the less ounces you’ve got, the less pain you’re going to have.”

Lightweight night vision glasses would certainly make it easier for U.S. troops to fight in the dark, but before you count on taking a pair of these optics into battle, just remember that not every DARPA project yields gear that service members end up using.

For several years, DARPA tried to create a real-life “Iron Man” suit of armor, but the exoskeleton proved to be so technologically complex that the project was ultimately terminated in 2019.

Still, the Pentagon’s ingenious band of inventors have played a major role in creating the internet and are currently working on developing a series of James Bond-style gadgets for troops including jetpacks, a flying machine gun, and an ingestible device that would prevent service members from getting diarrhea.

But if DARPA does succeed in creating lightweight night vision glasses for troops, there would likely be one major drawback: They would be easier to lose than current night vision goggles.