“Be as irritable and quarrelsome as possible without getting yourself into trouble.” 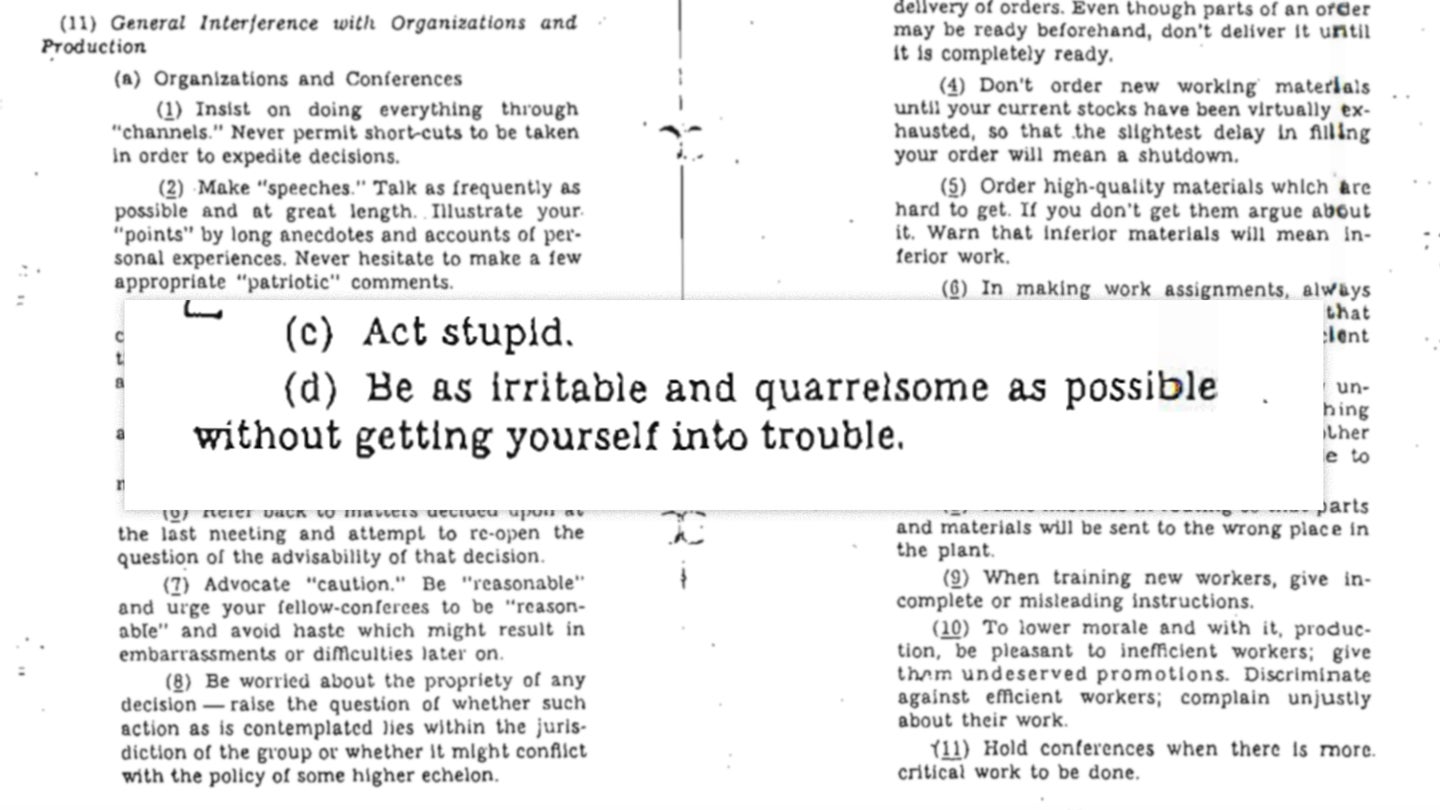 During World War II, the Office of Strategic Services (OSS) was manned with thousands of soldiers and spies, operating behind enemy lines to organize local resistance, gather intelligence and generally cause chaos for the enemy in occupied Europe. But as one OSS manual shows, sabotage isn’t always about blowing up railways or severing communication lines. Sometimes it’s as simple as being the absolute worst employee possible for your Nazi occupiers.

The “Simple Sabotage Field Manual,” published in 1944, notes that “simple sabotage does not require specially prepared tools or equipment; it is executed by an ordinary citizen who may or may not act individually and without the necessity for active connection with an organized group; and it is carried out in such a way as to involve a minimum danger of injury, detection, and reprisal.”

The manual is a wealth of knowledge in how to be a nuisance when it comes to just about every job. If you’re a janitor in a building, make sure to carelessly gather oily rags and other greasy waste in a pile and then, perhaps, carelessly drop your cigarette.

As “Simple Sabotage” says, “you can be the first to report the fire, but don’t report it too soon.”

If you work in an industrial manufacturing job, take horrible care of your tools and be sure to use them incorrectly. Put too much pressure on drill bits to break them, and keep adding hard, gritty substances to lubricants, like dirt, sand, ground glass, metal filings.

“Twisted combings of human hair, pieces of string, dead insects, and many other common objects will be effective in stopping or hindering the flow of oil through feed lines and filters,” reads the manual.

If you’re working around gasoline or oil tanks, “water, urine, wine, or any other simple liquid you can get in reasonably large quantities will dilute gasoline fuel to a point where no combustion will occur in the cylinder and the engine will not move. One pint to 20 gallons of gasoline is sufficient. If salt water is used, it will cause corrosion and permanent motor damage.”

When it comes to transportation, covertly turn road signs so that they point in the wrong direction. If you’re a taxi driver, waste a German officer’s time and money by taking the most circuitous route possible to wherever it is he’s trying to get to. If you work at a telephone switchboard, “delay putting enemy calls through, give them wrong numbers, cut them off ‘accidentally,’ or forget to disconnect them so that the line cannot be used again.”

The manual notes that any would-be saboteurs should take caution in carrying any of these acts out, and not be too brazen. The goal, after all, is not to cripple the Nazi war effort with one single act, but to merely be the kind of employee that causes a minor problem every day.

“Frequently you can ‘get away’ with such acts under the cover of pretending stupidity, ignorance, over-caution, fear of being suspected or sabotage, or weakness and dullness due to undernourishment,” says the manual.

When the simple saboteur isn’t slashing tires or forgetting to stock the bathroom with toilet paper — yes, that is a suggestion — there is always what the manual refers to as “general interference with organizations and production,” which is a very official way to describe someone being extremely annoying at work.

If you’re in a meeting, “talk as frequently as possible and at great length. Illustrate your ‘points’ by long anecdotes and accounts of personal experiences. Never hesitate to make a few appropriate patriotic comments,” reads the manual, adding that it’s important to constantly bring up irrelevant issues and haggle over language.

“When possible, refer all matters to committees, for ‘further study and consideration.’ Attempt to make the committees as large as possible — never less than five.”

For employees, work slowly and inefficiently. And if your boss has a problem with it, “pretend that instructions are hard to understand, and ask to have them repeated more than once.”

At 32 pages long, the simple sabotage manual provided tips to would-be saboteurs on just about every conceivable way they could be the most terrible, annoying worker possible, and in so doing, play a small part in winning the war by pissing in the occasional Nazi official’s gas tank.