An Army official said the situation “did not meet the criteria” for emergency leave. 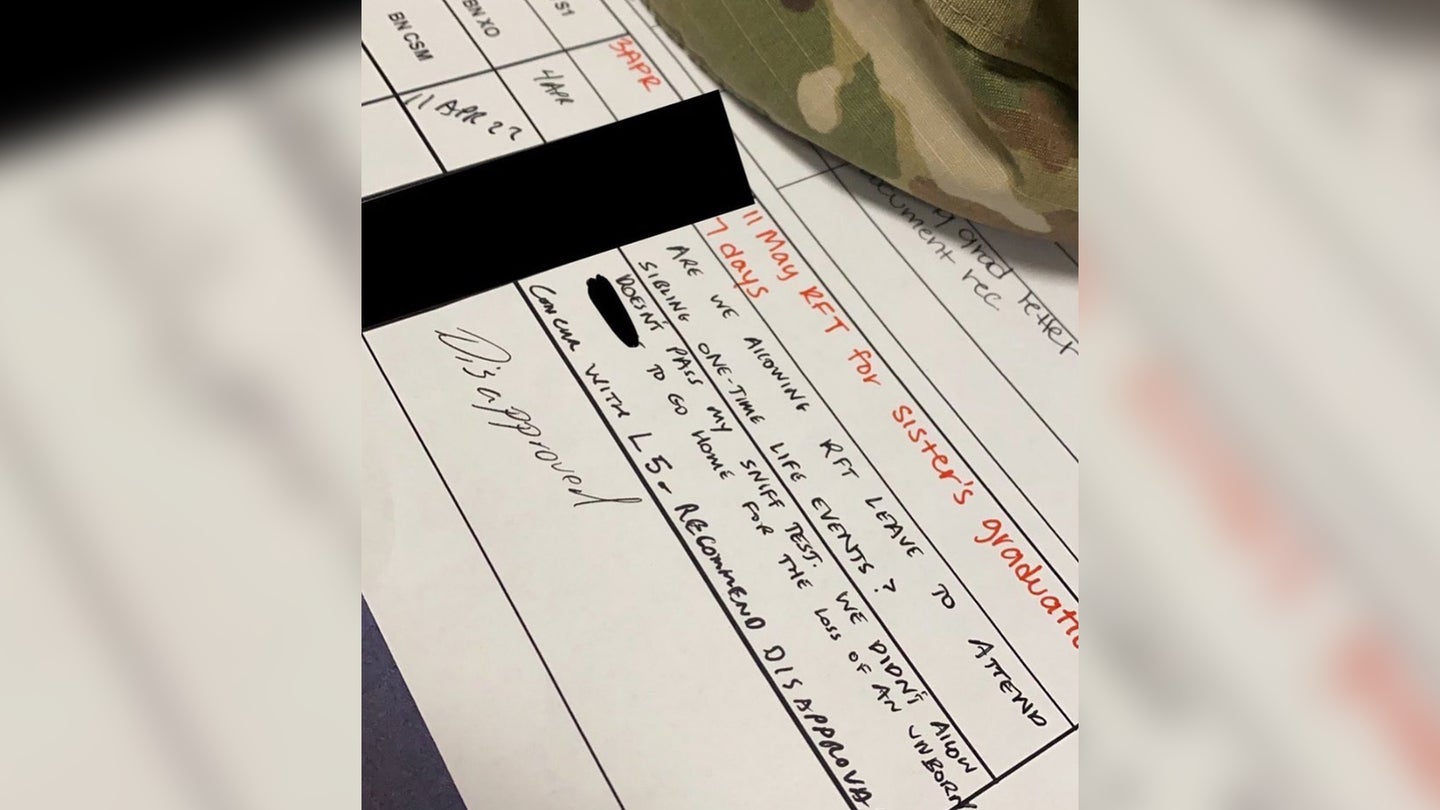 At least one Army battalion doesn’t seem to have gotten the “People First” message that Army leaders have been pushing over the past few years.

Army leaders with the 2nd Battalion, 227th Aviation Regiment, 1st Air Cavalry Brigade, denied a soldier’s request for leave in December to go home after a miscarriage. The leaders later used it as a reason to deny another soldier’s request to go home for their sister’s graduation, according to a screenshot posted publicly on Instagram over the weekend.

“Are we allowing RFT [release from theater] leave to attend sibling’s one-time life events?” the executive officer wrote on the form posted to Instagram.

“Doesn’t pass my sniff test. We didn’t allow [redacted] to go home for the loss of an unborn child,” the next comment said, though it’s unclear if it was written by the executive officer or command sergeant major.

Nevertheless, the sergeant major said he concurred with the assessment. “Recommend disapproval,” the CSM wrote. The next box, presumably for the battalion commander, shows that the soldier’s request appears to have been ultimately denied. “Disapproved,” read the handwritten note.

Capt. Donald Criswell, a spokesman for the 1st Cavalry Division, told Task & Purpose on Thursday that the 1st Air Cavalry Brigade has been deployed for Atlantic Resolve, a rotational deployment to Europe, since November 2021. The soldier’s request for leave because of a miscarriage came the next month in December. Though Criswell could not provide more specifics, he said the situation “did not meet the criteria for granting emergency leave per AR 600-8-10 or [U.S. Army Europe and Africa] leave restrictions policy.”

“The command works diligently to ensure that every request for emergency leave is closely considered on a case-by-case basis, meets the requirements set by regulation, and is applied equally and fairly to the entire formation during our deployment,” Criswell said.

The Army in April rolled out a policy that non-birthing parents would be allowed leave in the case of a miscarriage. The new policy made the Army the “only service so far” to give convalescent leave “to male soldiers, acknowledging emotional loss after this very significant life event,” the policy’s lead action officer told reporters in April.

But aside from policy, top Army leaders have relentlessly emphasized the importance of taking care of soldiers and families over the last couple of years. They’ve pushed the “People First” mentality, which boils down to looking out for one another, being there for one another, and taking care of each other. It also calls on leaders to do things for the good of their troops, not just to check boxes and go through the motions, or to do something simply because it’s the way it’s always been done.

Almost two years ago, Army Chief of Staff Gen. James McConville spoke out about the importance of work-life balance, and commanders working with soldiers to get them time away for important life events. He produced a scale ranking the importance of work events with life events. For example, daily training, and appointments or sports team practices are at the end of the scale, identified as “routine.” But major deployments and one-time family events, like a wedding — or, perhaps, graduation — are considered “critical.” Going to war and the death or birth of immediate family members — which one might expect could include the loss of an unborn child — are considered “vital.”

Atlantic Resolve is not a combat deployment, but a rotational, pre-planned deployment meant to help strengthen bonds with allied militaries on the continent through various training events. They did, however, assist in transferring equipment and personnel to Poland during the force build-up in Europe in the wake of Russia’s invasion of Ukraine.

The brigade’s commander, Col. Reggie Harper, “ultimately makes the final decision on all emergency leave requests in our deployed environment,” said Criswell, adding that Harper holds soldier and family readiness as a “top priority,” and works “tirelessly to care for them.” But one of the ways they look at people first is by providing “consistent and predictable application of the emergency leave rules during the deployment.”

“Consistent opportunities and treatment while considering the nuances of every soldier’s unique situation is ‘People First,’” Criswell said. “Inconsistently applied standards wrongfully puts both soldiers and leaders in an unpredictable environment, compounding the stress of an operational deployment.”