That is one big ol' sword. 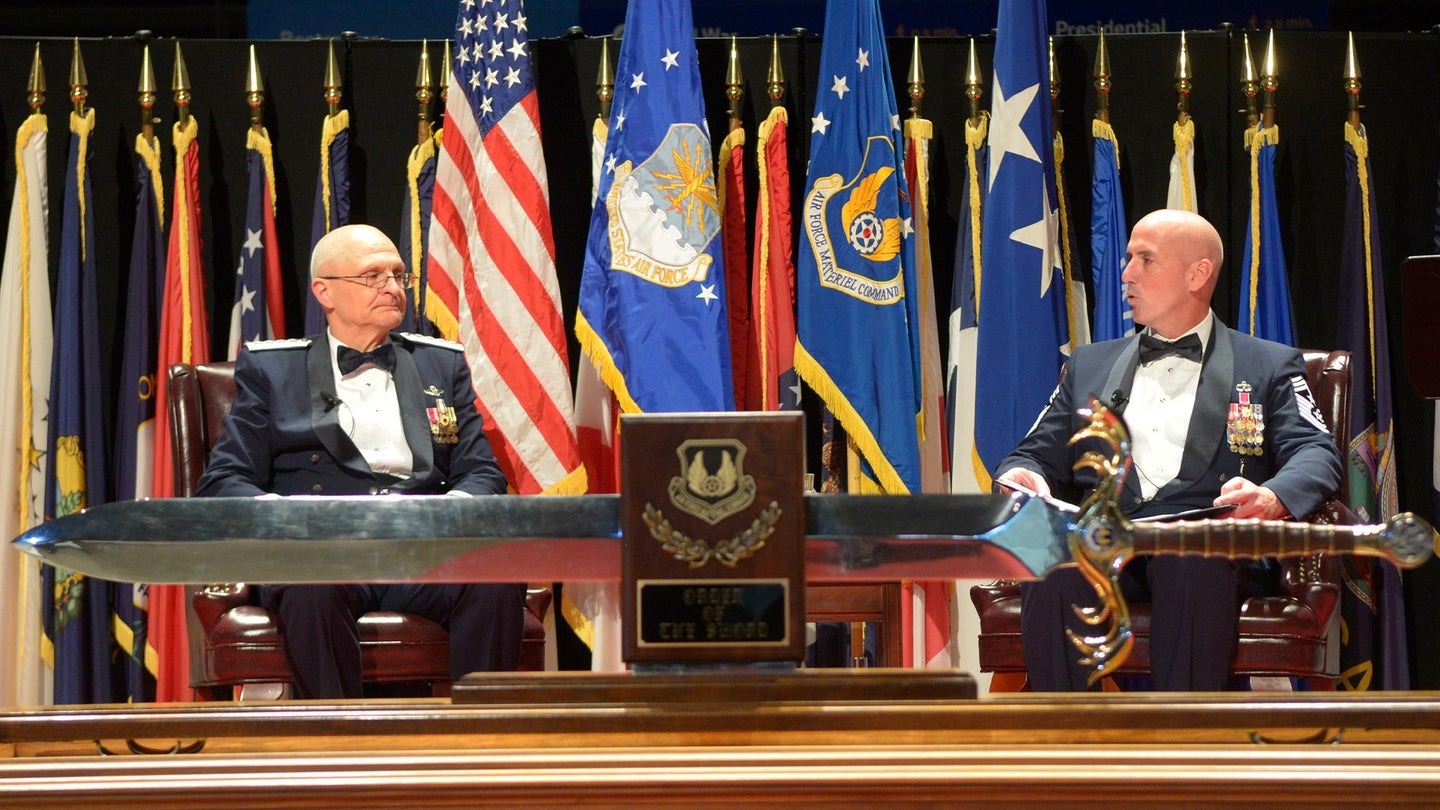 Gen. Arnold W. Bunch, Jr., Air Force Materiel Command Commander (center) is presented with his personal sword during his Order of the Sword ceremony May 13, 2022 at the National Museum of the United States Air Force. (U.S. Air Force photo by Darrius Parker).
SHARE

Gen. Arnold W. Bunch Jr. is currently the commander of Air Force Materiel Command at Wright-Patterson Air Force Base in Ohio but is set to retire later this year. And, as of May 13, he is also now the recipient of an Air Force tradition in which officers are presented by senior enlisted airmen with a giant sword that looks like it came from the set of Game of Thrones.

The honor, specifically, is a gigantic sword, of which each major command keeps its own unique design.

“I am honored, and I am greatly humbled to be given this honor. It is a privilege and the highest accolade that I have had bestowed upon me during my career. It means the world to me as an officer serving with the greatest enlisted force in the world to be given this kind of recognition,” said Bunch upon his name being added to the list of those who have been deemed worthy of what is, again, an absolutely enormous sword.

Unfortunately, the really big swords are kept by the commands, negating the possibility of any photos or videos surfacing of retired generals wielding one of these things.

The Air Force Order of the Sword was first given out in 1967 but is claimed to harken back to traditions from the Middle Ages.

The Air Force notes that these ancient noncommissioned officers would pledge their loyalty to their leader by presenting him with a sword. The tradition then supposedly carried on through the centuries, making its way to the United States during the Revolutionary War.

But, why let that history get in the way of the origins of these big-ass swords?

While any officer can be nominated, it’s ultimately decided by a committee of senior enlisted leaders from across the service that is chaired by the Chief Master Sergeant of the Air Force. In other words, it’s a very narrow tranche of enlisted personnel who are making these decisions, and not everyone is always satisfied with the results.

As of 2016, seven consecutive U.S. Air Forces in Europe (USAFE) commanders were presented with the honor, and there have been several officers whose receipt of these humongous swords has caused a bit of controversy.

For Gen. Merrill McPeak, who served as Air Force Chief of Staff from 1990 to 1994 and whose tenure was known for implementing unpopular uniform changes and the Quality Air Force initiative, the debate over inducting him into this order of huge swords is even in his Wikipedia page.

Still, there’s no reason to doubt that Bunch, who has previously said of his leadership philosophy that “the one thing I challenge young officers and young folks to do is count how many times they say thank you in a day,” is worthy of being one of 10 Air Force Materiel Command officer to receive the honor.

So, if the Air Force has its Order of the Sword, what objects would Space Force Guardians present to their officers?