“Being recognized personally is amazing, but most importantly getting that American citizen back is what I feel great about.” 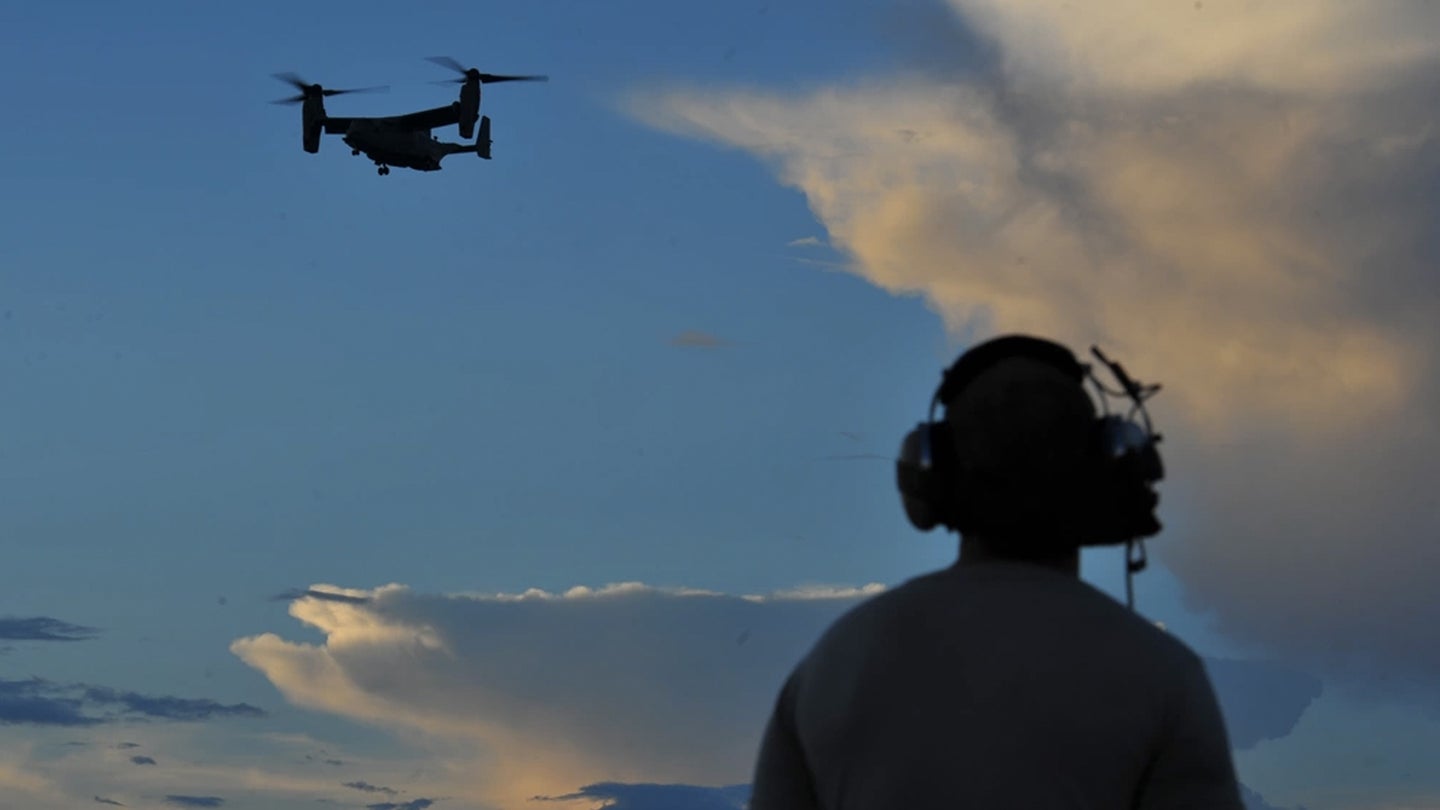 The 2020 mission saw airmen fly CV-22B Osprey and MC-130J aircraft about 2,000 miles from Rota, Spain to northern Nigeria. The aircrews flew more than 11 hours nonstop and dealt with multiple high-risk aerial refuelings, diplomatic delays, fatigue, an unknown threat environment and, for one CV-22, a total loss of critical aircraft systems which meant its aircrew had to be guided to a new landing zone by another aircrew over a half-broken radio.

“I’m very honored and very humbled to be recognized with this award. There were a lot of great [people] on that mission who are very deserving as well,” said Maj. Kyle Konkolics, an Osprey pilot who received the Distinguished Flying Cross, in a press release about the award ceremony, which was held at Kirtland Air Force Base, New Mexico on Jan. 11.

“Being recognized personally is amazing, but most importantly getting that American citizen back is what I feel great about,” Konkolics added.

The hostage in question was Philip Walton, an American who had been living on the border between Niger and Nigeria when he was kidnapped on October 27, 2020, by a group of seven armed men. The kidnappers called Walton’s father and demanded a $1 million ransom. Instead, the U.S. military readied its own, more lethal form of payment.

It was not an easy mission: According to the press release, the team of airmen had just 48 hours to prepare for a mission that involved more than a dozen aircraft, multiple aerial refuelings over several foreign countries, as well as a parachute drop of about 30 Navy SEAL Team Six operators.

“With minimal time prior to departure to develop a thorough plan and account for all contingencies, he used all available resources and led his crew in-flight to solve the complex problem of traversing through desolate airspace and terrain,” read Konkolics’ award citation.

According to our colleagues at The War Zone, the operation included four MC-130J turboprop transports, four CV-22 tiltrotor transports, one AC-130J gunship, one Navy P-8A patrol and reconnaissance jet, and six KC-135 aerial refueling jets. Mechanical failures strained an already stressful journey. One KC-135 had to abort due to an electrical failure shortly after take-off, according to Military.com. The jet landed, received some maintenance and a waiver to operate with minimal equipment, and managed to make its refueling window with an AC-130J.

Refueling in the air is one of the most dangerous tasks that military aviators perform, with a high risk of damaging both the receiving and refueling aircraft. The mission was particularly risky over the desolate stretches of the Sahel in North Africa, where there were few airfields for an injured plane to set down. The aviators flying on that mission had to refuel multiple times en route and they did not have the option to fail a single one.

“It’s trying to match all that up midair, going about 300 miles an hour, having aircraft within 10 to 12 feet of each other at night,” Col. Troy Pananon, then-commander of the 100th Air Refueling Wing, whose KC-135s contributed to the rescue mission, told Military.com. Pananon explained that the KC-135s refueled the MC-130Js, which then passed fuel to the CV-22s. “In strenuous conditions, yeah, it’s a challenge.”

It never got any easier. Senior Master Sgt. Christopher Reedy received the Distinguished Flying Cross for “navigating his crew through the total loss of critical aircraft systems,” according to his award citation. A special missions aviator aboard a CV-22, Reedy operates the aircraft’s rear weapon and helps the pilots keep the Osprey aloft.

The airman had his work cut out for him that night in 2020. Though the citation did not specify exactly which aircraft systems failed, they apparently were responsible for communication, navigation, and cockpit flight displays. Reedy managed to regain partial use of one radio, through which he told the other CV-22s that his own aircraft could not continue the mission. Somehow they managed to refuel mid-air in that degraded state.

“Without the use of aircraft navigation or cockpit flight displays, Sergeant Reedy assisted in performing a non-standard aerial refueling and executing a night formation landing, guided by his wingman, into marginal weather and visibility conditions,” read Reedy’s citation. Tech Sgt. Thomas Morgan, a third CV-22B special missions aviator, also received the Air Medal in part for helping guide his malfunction-plagued wingman through the ordeal.

After landing at a remote operating base, Reedy transferred some equipment and a weapon to another CV-22, which then took off to continue the mission.

The tension persisted the rest of the night. As a loadmaster aboard an MC-130J, Staff Sgt. Christin Springs was responsible for overseeing the multiple aerial refuelings between her aircraft and the CV-22s. Refueling in the air is hard enough, but Springs also battled “communication systems degradation,” to get the job done safely during the dark, exhausting mission, according to her Air Medal citation.

The aircrews were not the only ones having a hard time. The mission had to be flown at high altitude, but the unpressurized cabin of the CV-22s meant that some of the Navy SEALs aboard showed signs of hypoxia. Tech Sgt. Robert Duck, another special missions aviator aboard one of the Ospreys, received the Air Medal in part for loaning his own oxygen mask to a few of the SEALs to help them breathe, according to his citation. The mission was the longest time a CV-22 ever flew at high altitude, a spokesperson for Air Force Special Operations Command told the Albuquerque Journal.

The 30 or so SEALs parachuted into northern Nigeria, then “hiked about three miles until they came upon the captors’ small encampment in a copse of scrubland bushes and trees,” the New York Times reported in 2020. The CIA had located Walton beforehand, according to ABC News. The SEALs then proceeded to kill all but one of the seven captors, according to ABC News.

But the mission was not over yet. The commandos and the hostage had to then meet up with the CV-22s, whose crews navigated unfamiliar terrain to get to the landing zone.

“Finally, he selflessly guided his aircraft low-level into an unknown threat environment to recover the hostage and assault force at an unplanned, austere landing zone with obstacles mere feet away from his aircraft,” read Konkolics’ citation. It was not clear if the CV-22s then had to fly all the way back to Rota, but in the end they managed to rescue Walton without a single American injury: a major accomplishment considering the length and complexity of the flight.

“There’s not another military in the world that could have pulled that off,” then-Acting Secretary of Defense Christopher Miller said about the mission during a visit to the 100th Aerial Refueling Wing in 2020, according to Military.com. “The problem … is you guys make it look so freakin’ easy, that the American public just automatically assumes like, ‘Oh, yeah, you know, you push the U.S. military button and everything’s going to go fine … That’s why it’s so important to come out here and listen to y’all.”

Of course, it is not so easy: the aviators who operated the CV-22s and MC-130Js that night spend years preparing for high-stakes, special operations missions like the Nigeria hostage rescue. Even then, plenty of things still go wrong, which is where the intense training beforehand pays off. Maj. Gen. Phillip Stewart, 19th Air Force commander and presiding officer of the award ceremony last week, noted that the high quality of airmen was what made the mission succeed.

“I’m extraordinarily proud that the mission they executed ended so well,” he said, according to the press release. “The asymmetric advantage of America at war is our people, our great warriors.”