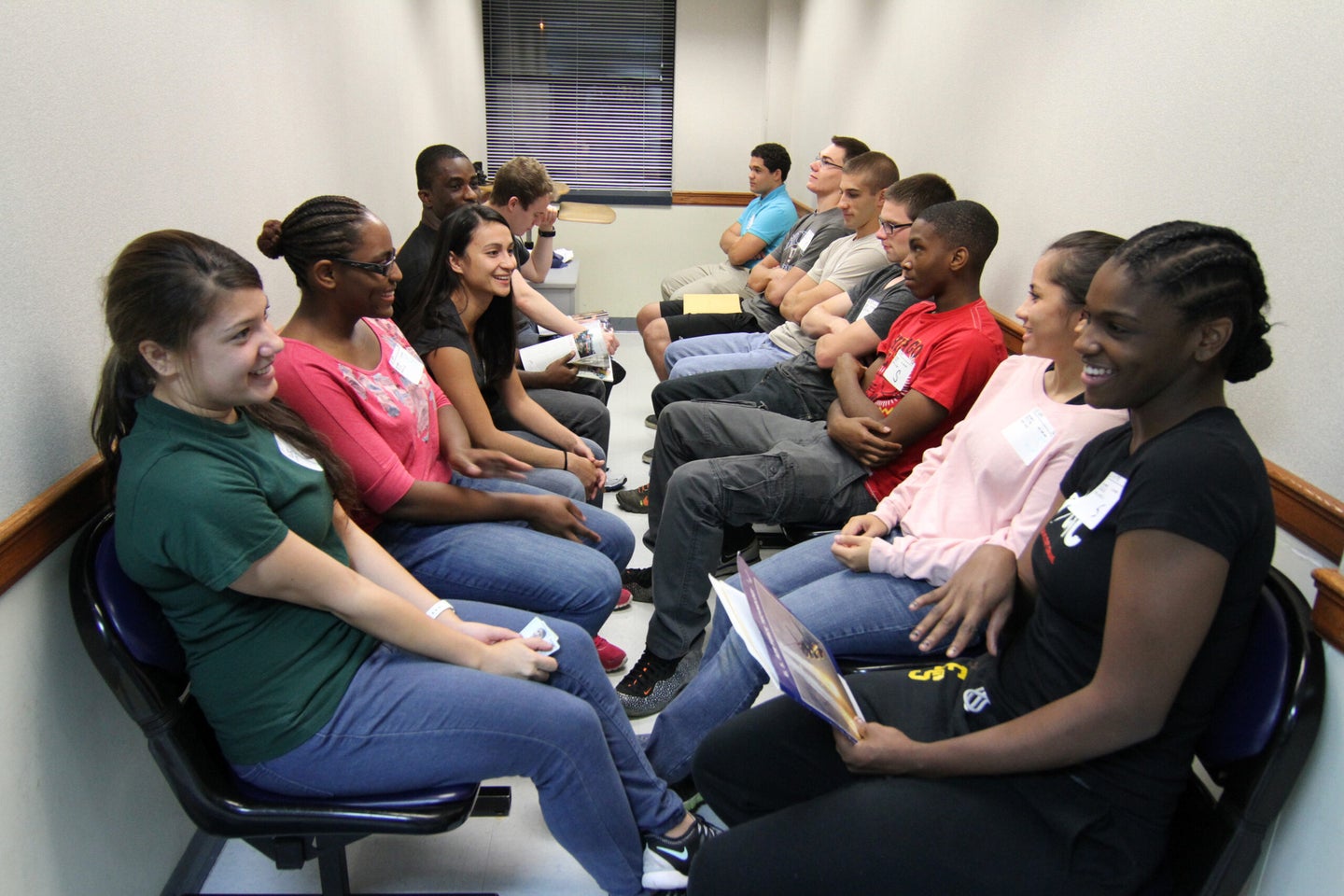 Applicants engage in friendly conversation and jokes with one another while waiting to be sent to their next evaluation at the Military Entrance Processing Station on Joint Base McGuire-Dix-Lakehurst, N.J., Oct. 7, 2014. (Photo by Army Sgt. Richard W. Hoppe, released).
SHARE

The United States Army really wants to pay people to enlist quickly. That’s the word from the Army itself, which announced this past week that recruits who sign up for a “quick ship” can get a $35,000 bonus. It’s the latest effort to fill the ranks fast as an October deadline to meet recruitment goals ticks closer. The Army is hoping fat stacks of money is the incentive people need.

Effective as of June 17, new recruits who sign four-year contracts and get to basic training within 45 days are eligible for the big bonus. For those keeping track at home, that is the second increase to quick ship” bonuses in less than half a year, and at a huge clip. In April the Army announced a $10,000 bonus for people who get to training within 30 days. That was bumped up to $25,000 on June 13, but the Army decided more money and more flexibility would be helpful only four days later.

“Recruiting in the current environment is a challenge, and we have positions we need to fill right now,” Maj. Gen. Kevin Vereen, head of U.S. Army Recruiting Command, said in a statement on the bonus increase. “Our Army is counting on us to fill these training vacancies quickly, so we are able to offer incentives to gain interest in critical career fields.”

Vereen is being understated. The Army’s new offer comes as several branches are struggling to meet recruiting goals for this fiscal year. The Army was already offering a signing bonus as high as $50,000 in general to recruits who get to training fast or pursue Airborne or Ranger schools.  As Task & Purpose recently reported, 267 “high-performing” recruiters are being kept on the job longer to help meet goals.

The Army is hoping to add 60,000 new soldiers by the end of the fiscal year, even as the 2023 budget is set to reduce the Army’s size from 1,010,500 to 998,500 soldiers. But it’s been hard to meet that goal, in part due to concerns among younger Americans over safety, harassment and sexual assault in the military. The Pentagon itself does not have the strongest opinion of Generation Z, having been critical of their physical readiness of the “Nintendo Generation,” but it needs the new recruits.

The quick ship bonuses are one of several recent moves the Army is trying. Military.com reported on Thursday, June 23, that the Army is getting rid of its mandate that recruits have a high school diploma or GED. That only applies if a potential soldier is at least 18 and can score a 50 or above on the Armed Services Vocational Aptitude Battery test. Recruits must also sign up by the Oct. 1 deadline.

Will the new strategies work? It’s the latest big bump to enlistment bonuses this year, and the Army hasn’t ruled out that it will be the last one. With only months to go until the deadline, it’s unclear if this will be incentive enough to get more people to sign up. But the Army clearly is hoping that cash rules everything around it.