When deploying into a conflict zone, it helps to have a winning hand. 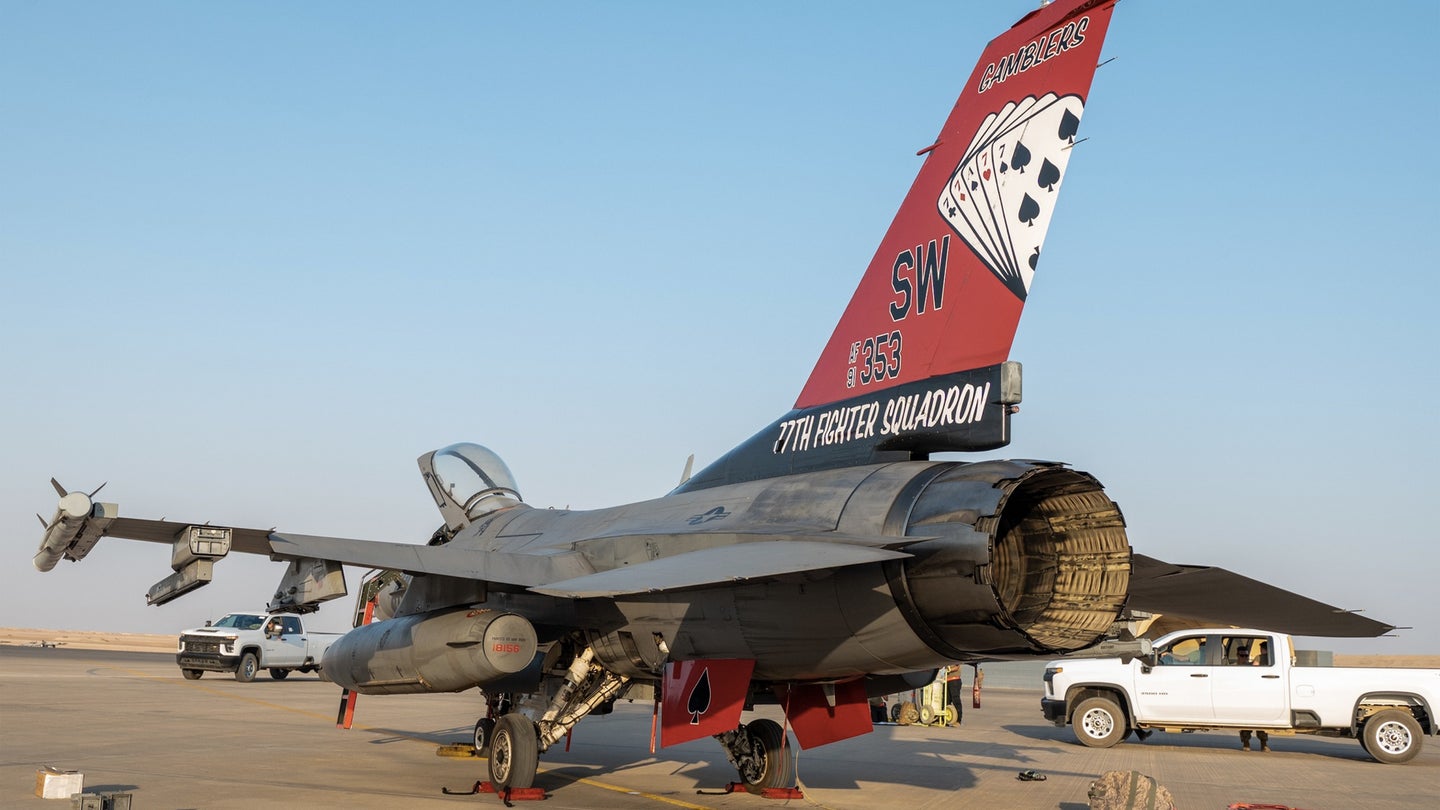 When deploying into a conflict zone, it helps to have a winning hand.

Good thing the Air Force’s 77th Fighter Squadron, also known as “The Gamblers,” just rolled into a new deployment bearing a four-of-a-kind, one of the best hands in poker, painted across the tail of one of its F-16 fighter jets.

The Gamblers arrived at Prince Sultan Air Base, Saudi Arabia earlier this month after a long journey from their home at Shaw Air Force Base, South Carolina, wrote U.S. Central Command in a Facebook post on Monday.

The squadron’s job is “to project combat airpower” across the region, thereby “supporting personnel, improving force movement and showing U.S. and partner nations resolve in the region,” CENTCOM wrote.

The mission is the latest in a very long line for the 77th, which is one of the oldest squadrons in the Air Force — and some of that heritage can be seen in the hand of cards on the tail of one of its F-16s.

The cards include a seven from each suit, with an ace of spades sandwiched in the middle. The “sevens” make sense since the unit is the 77th Fighter Squadron. The fact that there is a seven of each suit also happens to make the hand a “four of a kind,” not a bad hand at all in the high-stakes world of aerial combat.

The squadron was formed in 1918, but it was demobilized later that year and not reformed again as a combat unit until 1929, when it was redesignated the 77th Pursuit Squadron as part of the Army Air Corps’ five-year expansion program. Funds were scarce because of the Great Depression and so were planes and pilots, explained retired Air Force Master Sgt. Arthur Sevigny, so only five pilots were assigned to the squadron at the time its first planes began to arrive.

“Due to the shortage of both pilots and airplanes, the squadron resorted to two ship elements for training purposes,” according to a squadron history report from 1939 sent to Task & Purpose by Sevigny, who served as an aircrew life support specialist with the 77th in the 1980s and is now historian for the 20th Fighter Wing Association (the 77th is a component of the 20th Fighter Wing).

“Lastly, the design is typical of the life of a pursuit pilot in actual combat – just a gamble,” the report concluded.

“The 77th was instrumental in the 20th [Pursuit Group] achieving its record ‘kill’ of 432 enemy aircraft, 400 locomotives, 1,555 freight cars, 94 ammunition cars and 536 motor vehicles destroyed,” wrote the Air Force in a history of the 77th.

Decades later, the 77th flies F-16 fighter jets, the Air Force’s multi-role aircraft that can do anything from air-to-air combat to close air support to suppression of enemy air defenses. One notable 77th alum, retired Lt. Col. Dan Hampton, did a bit of both CAS and SEAD during the early days of the Iraq War. Hampton received a Distinguished Flying Cross with Combat “V” for flying fast and low at the edge of a sandstorm so he could use his 20mm cannon to take out enemy troops attacking Marines in fierce combat near Nasiriyah, according to his citation.

“The target was now back over my left shoulder and completely obscured by dust. I was also getting bounced around a bit by the turbulent winds on the front edge of the storm. Oh and the ground had disappeared again,” Hampton wrote about the mission in his book Viper Pilot: A Memoir of Air Combat.

Hampton managed to make out a line of enemy trucks coming down a road towards the Marines, which he lit up with the cannon. At one point he was flying low enough to see that the gunner of an enemy APC wasn’t wearing a helmet and he had a mustache, he wrote.

With that kind of heritage, it’s no wonder the Gamblers still sport a winning hand on their jets today. Good luck to anybody facing off against the 77th now that the squadron has arrived in Central Command — they’re going to need it.

Update: 10/28/2022; This story has been updated with additional history of the 77th Squadron insignia