“This team is equipped to travel great distances and fight their way in and out if necessary to make the mission happen.” 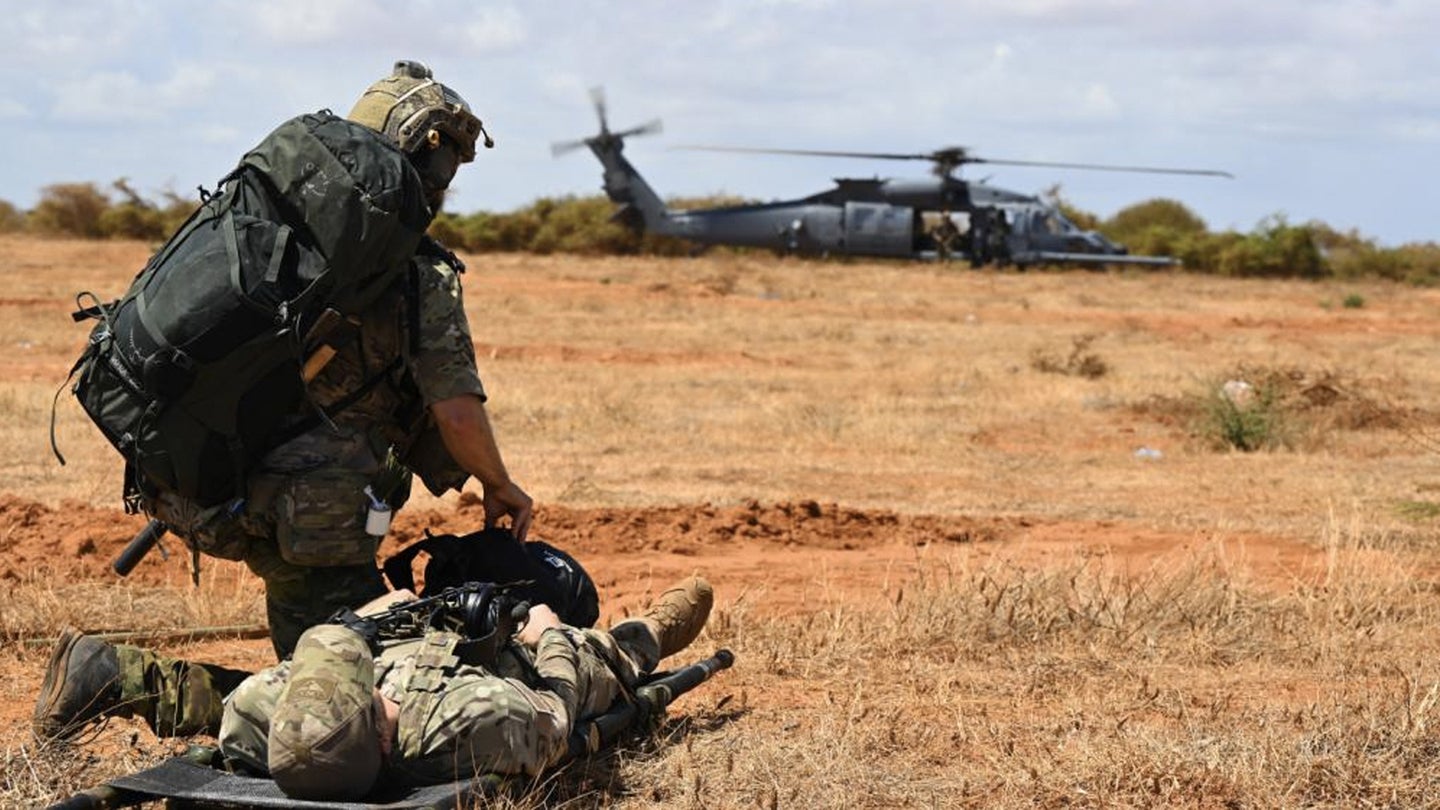 The Air Force’s newest rescue helicopter performed its first save on a deployment late last month when it rescued two people in the area of operations overseen by the Combined Joint Task Force-Horn of Africa, which includes several east African countries such as Djibouti, Somalia, and Ethiopia.

Though a press release about the rescue did not give specifics about the date, the location, or whether the lives saved were U.S. military members, the service emphasized that the new aircraft and the highly-trained airmen aboard kept the wounded alive until they could reach more advanced medical care.

“Even in the vast expanses of Africa, this combined team was able to pull a critical patient from the battlefield with the Air Force’s newest rescue vehicle and place them in the hands of skilled trauma surgeons, ultimately saving two lives,” said Air Force Lt. Col. Thaddeus Ronnau in the press release. Ronnau is the commander of the Personnel Recovery Task Force to which these HH-60Ws were assigned and the regional director of the Joint Personnel Recovery Center, which oversees the PRTF.

“By continuously working to ensure that ‘Jack’s worst day won’t be his last,’ these members of the rescue family upheld the highest virtues of the code of the air rescueman and demonstrated ‘these things we do that others may live,’” he added.

The rescue crews were activated before dawn on the day of the mission. The press release did not specify how far the crew had to travel to pick up the injured, but it apparently went smoothly, as the team “was in and out of the area without incident.”

The HH-60Ws flew the injured to the nearest medical facility for trauma surgery while pararescuemen, the elite Air Force combat medics who are trained to rescue downed pilots and special operators under fire, stabilized the patients in the helicopter cabin. One of the patients may have been severely injured, because after landing at the medical facility, an Air Force HC-130J — a transport plane that specializes in personnel recovery — flew in to transport the patient to more advanced care.

“I cannot overstate how proud I am of our team,” Capt. Abby Norwood of the 303rd Expeditionary Rescue Squadron said in the press release. “Everyone responded with complete professionalism, doing exactly what we train to do. We couldn’t have done it without the whole team.”

The incident showcases the finely-tuned combat rescue apparatus that the U.S. Air Force developed over 20 years of the Global War on Terror, where wounded service members and civilians are rushed from the front lines and into the right medical care with lifesaving speed.

After ‘Guardian Angels’ such as the pararescuemen transport the patients away from the frontlines and back to a base, the job often falls to Air Force aeromedical evacuation teams to keep the patients alive as they are airlifted to higher care in places like Landstuhl Regional Medical Center, Germany. AE crews are trained to operate sophisticated medical equipment aboard the turbulent cabins of a C-130 or C-17 transport aircraft, keeping their patients alive until they can be handed off to higher care.

That well-oiled Air Force rescue machine should be even more proficient with the new HH-60W helicopter at hand. Known as the ‘Jolly Green II,’ the 60W offers longer range, tougher armor, more advanced sensors, and more efficient data display technology than its predecessor, the HH-60G Pave Hawk, an aging workhorse of the Global War on Terror that the Air Force search and rescue community says is in need of replacement.

While Air Force helicopters have proven themselves capable of completing the search and rescue mission countless times amid counterinsurgency warfare over the past 20 years, the highest levels of Air Force leadership are not sure they can sustain that mission against a possible future enemy like China, which has a robust air force and plenty of surface-to-air missiles.

“The scenarios that we’re most worried about are not the same as they once were,” Air Force Secretary Frank Kendall told reporters in March, according to Breaking Defense. “When we were doing counterinsurgencies, and we were losing pilots in those kinds of situations, the needs were different. The acts of aggression like we’re seeing in Europe, or we might see the Pacific … put us in a very different scenario.”

Don’t sleep on the 60W or its crews, though. Ronnau, the personnel recovery task force commander, emphasized that his airmen can punch their way into a fight, pick up a patient, and punch their way back out.

“The PRTF is specifically manned, trained, and equipped to rapidly respond to emergency battlefield situations to return American, allied and partner forces to friendly control,” he said. “While personnel may be behind enemy lines, or far from needed support, this team is equipped to travel great distances and fight their way in and out if necessary to make the mission happen.”