A woman joined one of the most elite careers in the military for the first time ever last week, but the Air Force has been low-key about it. 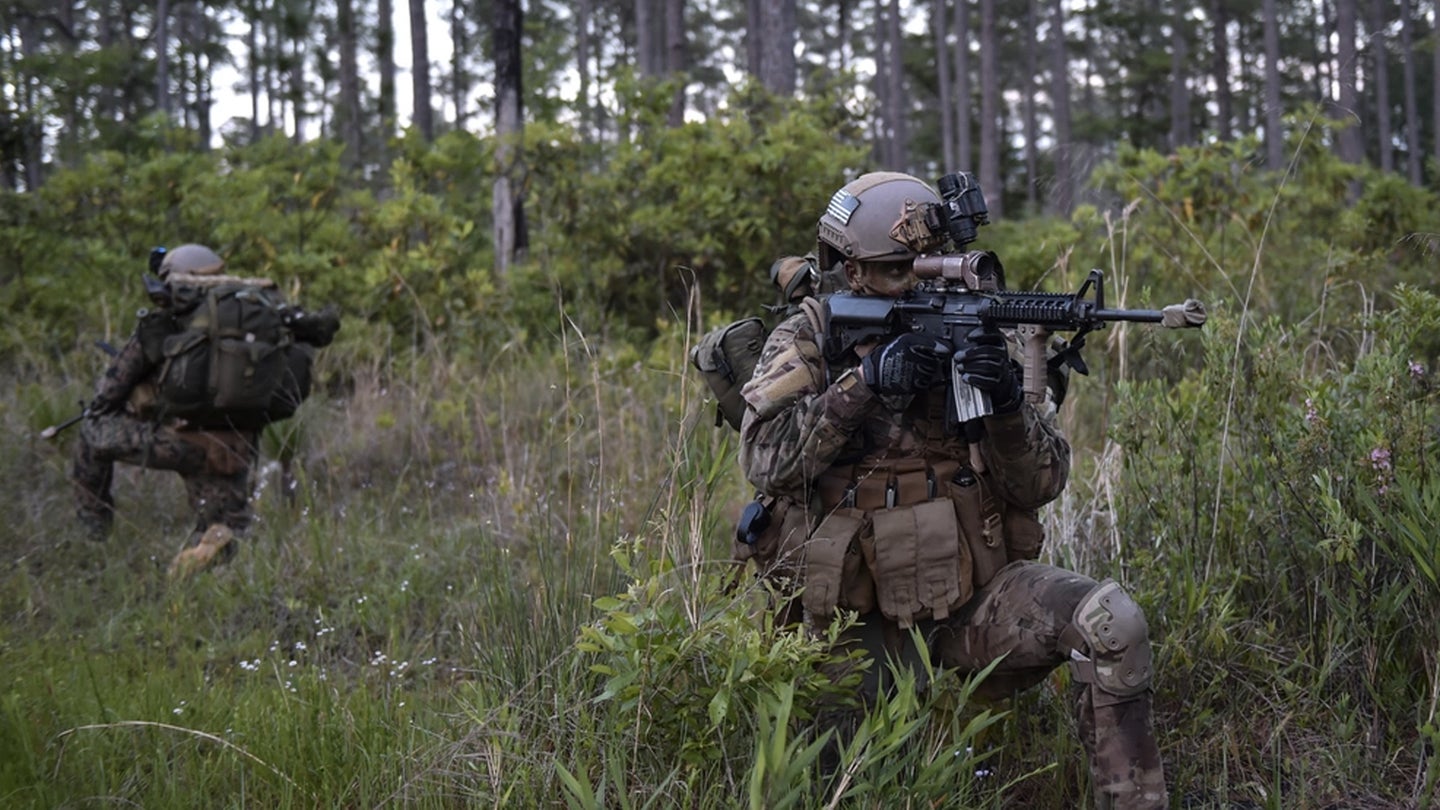 The type of news that usually draws attention from major media outlets and advocacy groups went largely unnoticed over the weekend. On Friday, Air Force Times first reported that an Air Force captain had just become the branch’s first female special tactics officer, an achievement akin to becoming the first female Green Beret in the Army. In most cases, this kind of news marks a major crack in the glass ceiling that hangs over women in the military, who are still not welcomed by many of their male peers and superiors.

When the Army announced in 2020 that a woman had earned the prized Green Beret for the first time; or when it announced the first female Ranger School graduates in 2015, the news came with considerable fanfare.

“From here, you will go forward and join the storied formation of the Green Berets where you will do what you are trained to do: challenge assumptions, break down barriers, smash through stereotypes, innovate, and achieve the impossible,” Lt. Gen. Fran Beaudette, then-commanding general for U.S. Army Special Operations Command, said at the time in a press release about the first female Green Beret.

The Air Force has been comparatively more subdued about news relating to women in its special operations fields. When Military.com first reported in March 2020 that an Air Force officer had become the first woman to complete the special tactics officer phase two assessment, the Air Force did not reveal the airman’s name due to privacy reasons. The Army also did not reveal the name of its first female Green Beret after she joined that career field due to security policy, though the branch did put out a formal press release announcing the news.

The news of the airman’s accomplishment comes months after Air Force Special Operations Command was accused of lowering its standards so that she could pass through the pipeline. AFSOC was also accused of pushing the airman through the process against her own protests that she was receiving special treatment. The head of AFSOC said those allegations were false or missing context, and a subsequent Air Force Inspector General investigation found no standards had been lowered specifically for the airman’s benefit. A spokesperson for Air Force Special Operations Command said that the controversy had no bearing on the Air Force’s decision not to widely publicize the airman’s accomplishment.

“As a command, we are incredibly proud of the history made last week as the first female graduated Combat Control School and became the Air Force’s first female Special Tactics Officer,” Capt. Savannah Stephens told Task & Purpose. “However, due to privacy and operational concerns, we are choosing not to identify her publicly or highlight the graduation in order to protect the integrity of future operational assignments she may have. The investigation and attention her training has received made no impact to this decision.”

Generally, AFSOC does not publicly identify or highlight special operators in order to protect them, Stephens said, including the female special tactics officer. Still, we may learn more about her in the future.

“We hope that a few years from now we’ll be able to highlight her accomplishments, as well as others that will continue to make history as we pivot to the AFSOC we will need, but for now we’re going to maintain the privacy and identities of all candidates going through the various training pipelines,” Stephens said.

The Air Force special warfare selection process and training pipeline are among the most difficult in the world. For example, the two-year combat controller training pipeline historically washes out 70 to 80% of its candidates. Air Force combat controllers and pararescue jumpers are trained to the same technical and physical standards as other special operators such as Army Green Berets and Navy SEALs. However, combat controllers and PJs also receive extensive training in the form of air traffic control and combat medicine, respectively, so they can control crowded airspace, call in airstrikes, or, in the case of PJs, evacuate wounded friendly troops from deep behind enemy lines.

For the newly-minted Air Force Special Tactics Officer, the scarlet beret she wore for the first time last week was a while in the making. Earlier in January, an anonymous member of the Air Force special operations community wrote a letter detailing how the female candidate quit the career field’s selection process and training pipeline multiple times, only to be reinstated by the leadership of AFSOC and the 24th Special Operations Wing.

The head of Air Force Special Operations Command, Lt. Gen. James “Jim” Slife wrote on Facebook that “most of what the author asserted about this trainee’s experience is either factually incorrect or missing important context which would completely change the perception.” Slife then asked the Secretary of the Air Force, Frank Kendall, on Jan. 7 to direct the branch’s Inspector General to review the situation.

The anonymous letter kicked off a firestorm of controversy in the Air Force special warfare community, especially when Air Force Times reported that the trainee herself protested the training standards being lowered for her.

“I believe the change in standards invalidated me with a majority of my team,” the captain wrote in an April 2021 memo obtained by Air Force Times. “One [instructor] cadre member had a conversation with a student and said that the cadre ‘rioted’ when they found out the PT test was changing back to lesser standards.”

This is not the first time the military has been accused of lowering the standards for female service members attempting elite qualifications. In 2015, then-Rep. Steve Russell of Oklahoma asked the Army to reveal the training documents for the first female Ranger School graduates. The request followed rumors that the women had received “special treatment,” according to Army Times.

The Inspector General found that leaders did not specifically lower qualification standards to benefit the female trainee, Air Force Times reported. However, she restarted training multiple times since 2018 due to loopholes or favorable interpretation of the rules, which can also happen with male candidates, Air Force Times wrote. The investigation revealed some interesting nuances about how quitting is handled in the special tactics training pipeline. Cultural norms change over time, the investigation found.

“Witnesses testified 10+ years ago, when a candidate got out of the pool, the candidate may have been immediately removed from the [assessment and selection],” investigators wrote.

Now things are different. A director of the 24th Special Operations Wing told investigators that when a candidate tries to quit “we try to let them cool down for a minute or so and then the cadre lead and chief or the senior member … have a discussion with them … ‘hey, you know, what’s going on?’”

The director said that “[i]n order to quit with us, you get your ruck, you put it on your back, and you give your rifle up,” but the female candidate never did that at any point during the pipeline. She did exit the pool during a training session, but “She never said the words ‘I quit’ or ‘I self-eliminate,’ but rather expressed concern about letting her team down because she was struggling with a specific pool drill,” a cadre leader told investigators. The cadre then asked the candidate if she was quitting, to which she said no, and soon after reentered the pool.

The female candidate had also quit during a solo land navigation course on her first time attempting the pipeline in 2021, but she was allowed to try again this year, Air Force Times reported.

“She’s not the first person that’s quit,” one senior enlisted leader told investigators. “There’s been many successful people that have quit and then come back, and redone it.”

Maj. Meg Tucker, an Army Kiowa pilot and Psychological Operations officer, wrote in February that “special operations leaders are probably under immense congressional pressure to put more women in the most elite military jobs,” which, if forced, can lead to controversies like the one that has dogged Air Force Special Operations Command. However, she has yet to meet a woman who actually wants to be placed under lower standards.

“As the owner of a small business that provides women with tactical fitness training programs, I can say with confidence that no one who is seriously vying for admission into these notoriously competitive schools, irrespective of gender, wants the standards lowered for them,” she said. “I have never encountered a woman inbound to an assessment or selection that wanted handouts. “

The spotlight often shines harshly on the first female service members to break into a new military career field, but it appears to fade shortly afterward. Tucker noted that just a few years after the first female soldiers received Ranger tabs, there are now a hundred more like them, and there are now multiple women serving as Green Berets. Air Force Times also reported that four other women are in the special warfare training pipeline at the moment, including two special tactics officer candidates, one enlisted special reconnaissance candidate, and an enlisted tactical air control party candidate. Perhaps if they graduate their pipelines, it will be treated with a similar lack of fanfare, and maybe that’s for the best.

“I look forward to the day when female firsts are no longer making headlines,” Tucker wrote, “when the trails have been blazed, gender no longer dictates fitness for service, and the door remains open for the next lethal American to walk through and take up the burden of serving as a special operations warrior.”