The Sergeant Major of the Army knows what you’ve heard about the service. He’s working on it

“If it was easy, somebody else would have done it.” 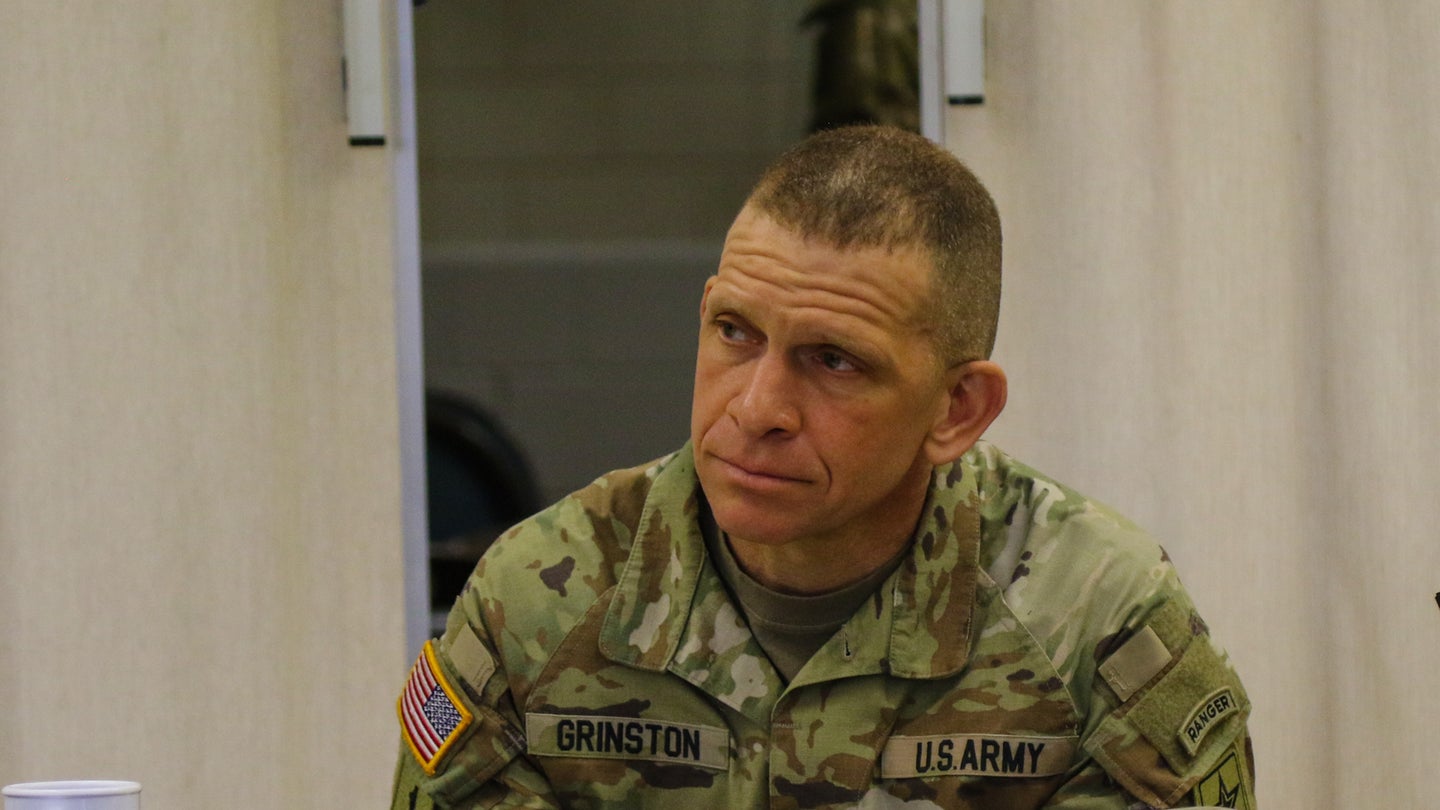 The Army has, for a lack of better terms, been going through it.

In September, the Defense Department released its annual sexual assault report which showed a 25.6% increase in reports of assault in the Army and the highest rate of prevalence of sexual assault in the U.S. military measured in over a decade. In recent months, the service has been forced to confront moldy barracks that has gone overlooked for years. All of this is on top of the worst recruiting crisis the Army has seen in decades, which has left the service 15,000 recruits short of its goal.

There are several factors the Army believes are playing into that recruiting crisis, including a low desire to serve among today’s youth, an inability for young Americans to serve based on low testing scores and health factors, and what leaders see as a lack of understanding about what the Army really is. Meanwhile, Secretary of the Army Christine Wormuth has repeatedly claimed that the media is partly to blame for amplifying the challenges facing the Army by reporting on sexual assault, harrassment, suicide, and stories about soldiers’ quality of life.

Sgt. Maj. of the Army Michael Grinston knows all of this. He wasn’t particularly surprised by the latest sexual assault report — frankly, it’s hard to imagine him showing surprise at much — though he said it still “upset” him to see. But he’s been laser-focused on this issue, in addition to suicides in the force, for a while now now.

Sitting in his Pentagon office on Sept. 23, Grinston told Task & Purpose that he’s been aware of the recently-released sexual assault numbers since last June. He tracks that data, and data about suicides, very closely, he said. The current data for this year, which includes suicides and reports of assault, is already down from last year — there have so far been 520 fewer assaults reported, and 51 fewer suicides.

But that data won’t be publicly available until next year. The most recent report released last month looked at data between October 2020 and October 2021, and in June 2021 it was already clear that it was trending in that direction. He recalled the annual summit of sergeants major during that same month, when Dan Heath, author of Upstream: The Quest to Solve Problems Before They Happen, a book Grinston references regularly, came to speak with the enlisted leaders. The message behind Heath’s book is prevention: how to get “upstream” of a problem before it happens. It’s a critical piece of eliminating sexual assault, harassment, and suicide from the ranks, but one that the Army has struggled to prioritize.

“Ninety percent of all our laws and our money goes towards response, and the other small 9% goes toward prevention,” Grinston said. “So we had that discussion, and I said at the end of that conference, ‘I want zero sexual assaults and zero suicides.’ But what I needed to do is I needed to get data, relevant data, at that moment. That’s actually a little bit more challenging than I thought.”

Indeed, Grinston explained that a critical piece of getting the full picture of sexual assault in the Army — the prevalence of assault — isn’t available to the services. Individual branches are unable to conduct their own prevalence surveys, which is what the Pentagon releases every two years. But by the time the services get that data, it’s old, and the people who are reporting it have moved to a new command, a new assignment, or maybe even left the Army.

“Right now, the only people that are getting prevalence is DoD through a survey. And in the next two years when they do the next prevalence survey, that’s when I would, in theory, get if prevalence is going down. And I think that’s part of the problem. I think there has to be a way that we can get more relevant [data] in the year that we do the reporting and the prevalence data. … We’re almost guessing,” he said. “I can find out what happens in Ukraine in five minutes, but we can’t get prevalence data that’s within the last six months.”

So instead of waiting for DoD to fix his problem for him, Grinston said he asked himself what he “personally was going to do” — and he’s been working to answer that question ever since.

This hands-on approach isn’t new for Grinston: in recent years, he has spearheaded several major policy changes and initiatives, including a study of the Army’s height and weight standards which is still ongoing, updated hair and grooming regulations, and an extended timeline for postpartum women to meet fitness standards. One of the biggest changes he’s tried to impart to other enlisted leaders in the force is to move quickly when possible, to address problems immediately. In other words, don’t let the red tape and bureaucracy of the Pentagon slow you down in taking care of your soldiers. It’s something that seems so simple, but at times appears antithetical to how the Army, and the military at large, does things.

Grinston says he’s done with waiting two years to collect data and then make a change. He’s tired of the “studies” that seem to go on forever, while the problem that’s actually being studied persists, whether that’s sexual assault and harassment or suicide.

For more than a year now, Grinston has held a monthly summit of command sergeants major around the force. During the monthly meeting, the group discusses various problems and ideas to solve them. It’s where the seemingly-simple idea to move Sexual Harassment/Assault Response and Prevention (SHARP) training up on the training schedule for new recruits at Fort Leonardwood, Missouri, came from.

It’s also where leaders are discussing other ongoing ideas, like removing alcohol restrictions in the barracks in hopes of improving the service’s alcohol culture, and offering performance-based bonuses, which they’re discovering is a bit more complicated than they’d originally thought.

A few hours after speaking with Task & Purpose on Sept. 23, Grinston met with a handful of other leaders to discuss the following week’s meeting. They went over the schedule for the meeting and briefly discussed a few of the important points — including the new sexual assault report. Grinston was clearly frustrated as they spoke about the prevalence data and the Army’s inability to gather it themselves. While he said the Army is currently seeinga decrease in reports, he doesn’t actually know if it’s a good thing or not unless he has prevalence data to compare against it. If reports are going down, for example, but prevalence is going up, that would indicate that more people are being assaulted but fewer people feel comfortable reporting. The two-year old data “doesn’t help,” Grinston said, and getting more prevalence data two years from now “still is not helpful.”

“You know what would be positive in my mind?” an exasperated Grinston said in one moment during the meeting. “Less sexual assault.”

“To me, that is true prevention,” Grinston said. “It’s reception companies. It’s assessments for first sergeants. It’s the assessment for battalion command teams. It’s also quality of life. It’s ‘how do we have these activities on the base? Do we have good housing?’ And if we get all that right, I think we’ll see less sexual assaults. A lot of people want to connect it to, ‘Did you do more sexual assault training?’ But I think the more you get after the environment on the installation, the culture of the unit, I think that’s true prevention.”

And for Grinston, preventing sexual assault and preventing suicide is often one in the same.

The two problems are “not independent,” he said, and it’s frustrating for him to see leaders approach them as siloed issues. They both come back to building a better culture — hence the introduction of “This is My Squad” in 2019 — where soldiers and leaders alike trust one another and look out for one another. If you’re making efforts to improve your unit’s culture, it could help prevent both suicide and sexual assault.

It’s why he sees the monthly summits as a critical piece of improving culture: It allows leaders to take ownership over their installation, their units, and have the freedom to try something new. It’s a different way of doing things and Grinston has had to remind people in the past that it’s okay to throw ideas out and see if they stick. It’s okay to fail.

“You hear it all the time: ‘Well, I don’t want to make sausage in front of the sergeant major of the Army.’ I want to make sausage. I want to hear ideas … because if the people with the money and authority that can help with policy don’t hear the ideas in the forum, then you may wait too long and it doesn’t get funded or it’s not a policy,” Grinston said.

There’s some evidence to suggest that this approach is working. The idea to move SHARP training for new recruits up to the first few days of arriving at Fort Leonwardwood, Missouri, resulted in a sharp decrease of reports of harassment and abusive sexual contact. And Grinston said the Army is seeing a decrease in suicides this year compared to this time last year.

In order to stay on top of the number of suicides in the force, Grinston said the numbers and data out of each installation are regularly monitored. The second a negative trend is identified — like an increase in suicides — Grinston is having a conversation with the enlisted leaders of that installation.

“Do they need a cohesive assessment team? Do we need to do more counseling? ‘We’re not doing well with gun safety.’ Do they need more financial training? … What we’re seeing is we’re attacking it way further upstream and then when we do see a trend of a unit spiking, it leads us to a conversation, and then do we need to apply more resources, or not. Let’s have a discussion, what’s going on?” Grinston said. “And when we’ve done that — I’ll just say that when we’ve done that — we’ve seen it flatline.”

During the pre-briefing on Sept. 23, ahead of the next week’s monthly summit, Grinston sat at the table in his office as other leaders walked him through a slide show of updates and told him who would be speaking, and who would be bringing what information. He asked questions, and gave guidance on the kind of data he wanted to hear the following week. At times he sounded frustrated, but mostly he was speaking in that dry, to-the-point way that he does.

The leader running the slide show flipped to one slide that outlined a series of hurdles and questions to one of the ideas the sergeants major had come up with in a previous meeting.

Grinston sighed. “Well,” he said, “if it was easy, somebody else would have done it.” They flipped to the next slide.